A criminal band assaulted an armored car warehouse in Ciudad del Este on Monday 24 April 2017, blasting the vault with explosives and stealing over US $8 million in cash, and escaped in five armored trucks in a Hollywood-style vehicle and boat chase which included shootouts, an attack on a police station, and numerous blockades.  One police officer and three gangsters were killed and hostages taken.  Weapons involved included assault rifles, grenades, explosives, and a .50 caliber rifle.  The Brazilian PCC (Primeiro Comando da Capital/First Capital Command) gang is suspected to be behind the spectacular robbery. 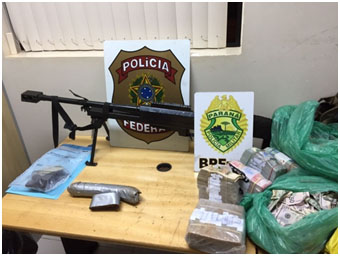 Using automatic rifles, dynamite and anti-aircraft guns, around 50 gangsters turned city into a battle zone before fleeing in speedboats with about $8m…

Brazilian gangsters have taken armed robbery to a lethal new level with a cross-border attack on a Paraguayan security vault and police headquarters using automatic rifles, dynamite and anti-aircraft guns in what local media have described as “the heist of the century”.

One police officer was murdered in the assault and three suspects were killed by police after they fled the scene and crossed the river border in speedboats with an estimated $8m.

Using diversion strategies and a degree of firepower usually reserved for wars, around 50 gangsters—believed to be from the First Capital Command (better known by its Portuguese acronym PCC)—turned the city of Ciudad del Este into a battle zone for more than three hours early on Monday morning.

Brazilian police near the border with Paraguay have exchanged gunfire with members of a gang who carried out what Paraguayan officials are calling the robbery of the century. So far three gang members were killed and two injured in the clash, police say. The number of robbers involved and display of weapons has led authorities to believe it is a one of Brazil largest criminal gangs…

After the robbery, the gang created a diversion by burning cars and attacking the local police station, and escaped after a two-hour shootout that left one police officer dead at the scene after the company’s vaults were blown up…

Numerous witnesses said they heard the heavily armed men speaking in Portuguese, leading to speculation that they could be members of the First Command of the Capital (PCC), one of the largest criminal groups in Brazil. Weapons used included AK 47s, C4 explosives, infrared weapons, snipers and even anti-aircraft guns and a helicopter. 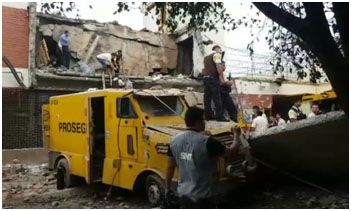 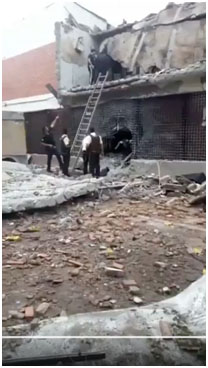 This incident involves a criminal band conducting a complex robbery against an armored car warehouse in Ciudad del Este, Paraguay on 24 April 2017.  The raid, called a  “mega-robbery” or “mega-assalto,” involved an early morning assault on the headquarters of Prosegur security in Ciudad del Este across the Parana River from Brazil.[1] Approximately 50-60 gangsters were involved in the operation. It began when the armed commando moved into Ciudad del Este, detonated explosives at the front of the Prosegur armored car headquarters and then engaged police in a gun battles (killing one police officer at the initial scene after the vaults were blown up), attacked the local police station, and created a series of blockades (narcobloqueos) while they fled in stolen armed cars and then onboard small boats down the Parana River.[2] It is believed that the gang commando remotely detonated 13-16 vehicles and deployed caltrops to create the blockades utilized to mask their escape and inhibit pursuit.[3][4]

The robbery—which resulted in between US $ 8-40 million in cash [5] being stolen—is believed to have been conducted by the PCC (Primeiro Comando da Capital/First Capital Command) a hybrid prison-street gang that originated in the Brazilian prisons and now is a key actor in Brazil’s criminal landscape running numerous criminal enterprises and controlling turf in several favelas.  A notorious PCC member Luciano Castro de Oliveira (aka “Zequinha”) was arrested trying to escape across the Paraná River from Paraguay into Brazil.[6]

According to Paraguay’s Minister of Interior Lorenzo Lezcano, the heist was “an assault with a well-planned operation.”[7] Weapons involved included assault rifles (fusiles ametralladoras), a .50 caliber rifle (ametralladora pesada antiaérea calibre .50) and seven kilos of explosives.[8] The PCC nexus could help explain the sophistication involved.  Indeed, the PCC has been linked to prior armed robberies targeting Prosegur in Brazil and Paraguay.[9]  The cross-border assault and robbery by a hybrid gang (megabanda) with third generation gang (3GenGang) attributes into the Tri-Border Area (Triple frontera)—an area known for insecurity and lawlessness—raises complex multi-state security concerns.[10]  These concerns go beyond robberies [11] and the associated violence since this type of sophisticated quasi-terrorist robbery operation could be used to fund broader PCC activities including more extensive brigandage, lawlessness, corruption, and confrontations with the state as they evolve into criminal soldiers.

The PCC—as projected by 3GenGang analysis—is now actively engaged in mercenary type activities and power accumulation behaviors that will result in it manifesting de facto political behaviors as it consolidates its urban and prison territories into a patchwork of mini-criminal statelets.  These trends, along with the fact the PCC is increasingly becoming enriched by illicit narcotics revenues and increasingly rivals the power of many Latin American cartels, suggests it is quickly evolving in its militarized capacity.  With recent indications of demobilized FARC guerilla fighters now going over to the PCC as gunmen and tactical unit trainers and the potentials for a ‘Brazilian slum paramilitary capabilities race’ between the PCC and their archrivals the Comando Vermelho (Red Command)[12], a powder keg is brewing.  This type of explosive situation is not only forming in Brazil’s favelas but also in surrounding urban and rural areas as well as in some regions of contiguous countries such as in Colombia and Paraguay.  Such a fragmenting internal security scenario may very well initially be beyond the capacity of Brazilian law enforcement and military police units to contain.  Illustrative of worsening conditions are a series of failed governmental campaigns focused on open air crack markets blatantly existing in major cities—such as Cracolândia in São Paulo—and the use of high powered weaponry directed at law enforcement—such as resulted in the shooting down of a police helicopter in Rio de Janeiro in November 2016, killing all those onboard.[13][14]

[5] The exact amount stolen is unknown.  Media estimates of the amount taken range from US $8 million to $40 million, but neither the victim nor the authorities have confirmed a specific loss.

[10] See Robert J. Bunker and John P. Sullivan, “Cartel Evolution: Potentials and Consequences.” Transnational Organized Crime. Vol. 4 No. 2, Summer 1998: pp. 55-74 and John P. Sullivan and Robert J. Bunker, “Drug Cartels, Street Gangs, and Warlords.” Small Wars & Insurgencies. Vol. 13, Iss. 2, 2002 for a discussion of drug cartels and organized crime in the Tri-Border region at the confluence of Brazil, Paraguay, and Argentina and the interaction between cartels and gangs and their potential to dominate criminal enclaves in the manner of warlords respectively.