Now available at Amazon - Blood and Concrete: 21st Century Conflict in Urban Centers and Megacities provides a foundation for understanding urban operations and sustaining urban warfare research. This Small Wars Journal (SWJ) Anthology documents over a decade of writings on urban conflict. In addition to essays originally published at SWJ it adds new content including an introduction by the editors, a preface on “Blood and Concrete” by David Kilcullen, a foreword "Urban Warfare Studies" by John Spencer, a postscript “Cities in the Crossfire: The Rise of Urban Violence” by Margarita Konaev, and an afterword “Urban Operations: Meeting Challenges, Seizing Opportunities, Improving the Approach” by Russell W. Glenn. These essays frame the discussion found in the collection’s remaining 49 chapters. Blood and Concrete continues the legacy of Small Was Journal's coverage of urban operations, conflict and combat. - Dave Dilegge, Robert J. Bunker, John P. Sullivan, and Alma Keshavarz, Editors. 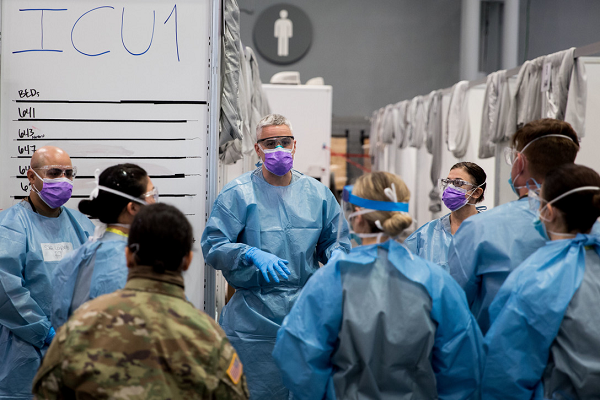 Army Maj. Sean Shirley, assigned to the 9th Hospital Center, holds a meeting with his staff in the Javits New York Medical Station intensive care unit bay in New York City. April 4, 2020. The facility, which has been operational and caring for non-COVID-19 patients since March 30, began providing medical care for patients with the virus on April 3. Photo by Navy Chief Petty Officer Barry Riley.

"Small wars are operations undertaken under executive authority, wherein military force is combined with diplomatic pressure in the internal or external affairs of another state whose government is unstable, inadequate, or unsatisfactory for the preservation of life and of such interests as are determined by the foreign policy of our Nation."

Small Wars Journal publishes original works from authentic voices across the spectrum of stakeholders in small wars. We also link you to relevant goings on elsewhere.  Login with your SWJ Username to comment, or Register, it's free. You can start your own threads in the Small Wars Council discussion board, but note that the board requires a separate Council Username. Follow SWJ on Twitter @smallwars.

Small Wars Journal just reopened its Amazon Associates account and can receive a percentage of each purchase you make through this portal: Shop Amazon and Support SWJ - thank you very much!

A New Role for Joint Civil-Military Interaction
by Thomas Matyók, by Srečko Zajc | Wed, 04/08/2020 - 1:18am | 0 comments
Global crises, such as the spreading of the novel corona virus (COVID-19), hybrid threats and asymmetric warfare require civil-military interaction responses guided by a unity-of-aim approach to build-up capacity for successful conflict transformation. No single activity has a monopoly on responses. All of society is required to act collaboratively in replying to demands placed on it by emerging threats. We ask: What can civil and military leaders and operators responding to crises, hybrid threats, and asymmetric warfare learn from medical approaches to disease prevention and intervention?
New Small Wars Journal-El Centro Book on Gangs — Strategic Notes on Third Generation Gangs
by SWJ Editors | Tue, 04/07/2020 - 11:20am | 0 comments
"Small Wars Journal" is proud to announce the release of a new Small Wars Journal-El Centro Anthology: "Strategic Notes on Third Generation Gangs". Continue on for more information.
SWJ El Centro Book Review – "The Hollywood Kid: The Violent Life and Violent Death of an MS-13 Hitman"
by Robert Bunker | Tue, 04/07/2020 - 12:38am | 0 comments
Óscar Martínez and Juan José Martínez, "The Hollywood Kid: The Violent Life and Violent Death of an MS-13 Hitman". Translated by John B. Washington and Daniela Maria Ugaz. London: Verso, 2019 [ISBN: 9781786634931, Hardcover 330 Pages]
Six Challenges Facing a Fragile Middle East Amid Coronavirus
by Hesham Youssef | Sun, 04/05/2020 - 12:38pm | 0 comments
The COVID-19 pandemic has proven a challenge even for wealthy countries with the most robust health care systems. For the Middle East—a region with no shortage of dangerous pre-existing conditions—it could be far worse. The virus now appears to be spreading to a part of the world where, over the past decade, conflict and displacement have become widespread while effective governance and social cohesion have eroded.
Four Lessons from Outbreaks in Africa for the Age of Coronavirus
by Aly Verjee | Sat, 04/04/2020 - 2:34am | 0 comments
As the coronavirus pandemic continues and new behavioral practices—from social distancing to avoiding handshakes and hugs—become expected norms overnight, there are crucial policy lessons to be learned from struggles against previous outbreaks of disease in Africa.
The Coronavirus Pandemic is a Failure in Leadership - Not Intelligence
by Anonymous All-Sourcer | Fri, 04/03/2020 - 6:58pm | 0 comments
Words mean things. The mantra of the best Senior Intelligence Analyst I know has a curt humor to it, but in our business, it is advice worth remembering. In a recent opinion piece for "Foreign Policy", political scientist and author, Micah Zenko describes the leadership shortcomings of the Trump administration throughout the COVID-19 crisis. The article’s title? “The Coronavirus Is the Worst Intelligence Failure in U.S. History.” Words mean things.
Coronavirus Puts Systems for International Cooperation to the Test
by William J. Long | Fri, 04/03/2020 - 4:32pm | 0 comments
In his book “Pandemics and Peace,” published in 2011 by USIP Press, Dr. William Long contended that infectious disease control presents an unparalleled opportunity for American leadership in global public health. Long looks back at the recommendations he made for U.S. global health policy and how they are relevant today and at how other outbreaks in recent years have led to increased cooperation.
Winning the Choice: Problem-focused Marketing for Military Partnership
by Chris Telley | Fri, 04/03/2020 - 8:12am | 0 comments
U.S. military leaders, at home and abroad, champion the idea that the United States military is the “partner of choice” for security relations in its competition with revisionist actors like Russia and China. But, is it, really? For the first time in thirty years, a peer competitor is challenging US influence in the western hemisphere; hard questions and innovative actions are required to ensure that security customers in the region choose us.
U.S. Naval War College - Humanitarian Response Program - Pandemic Response: Select Research & Game Findings - April 1, 2020
by SWJ Editors | Wed, 04/01/2020 - 2:33pm | 0 comments
This document is a summary of 16 key research and game findings focused specifically on the characteristics of civil-military response to a pandemic scenario. The numbered bullets below correspond to more detailed explanations of findings presented later in the document. While these findings are in no way definitive or complete, they are a sampling of relevant guidance based on research, gaming and expert opinion. It is our hope that these 16 findings will contribute to improving civilian and military effectiveness in humanitarian assistance and disaster response operations.
“Accidental Guerrilla” Syndrome in California, 1836-1846
by James T. Houser | Wed, 04/01/2020 - 3:21am | 2 comments
Sun Tzu’s injunction to “know your enemy” is never more critical than in counterinsurgency (COIN) warfare. During its COIN conflicts in the last hundred years, the United States military has fallen especially prey to the thinking trap of lumping all its opponents into the same category. COIN expert David Kilcullen identified this phenomenon as “accidental guerrilla syndrome” in his 2009 book of the same name.

Libya War Escalates as Health Care System Crumbles
by Voice of America | Wed, 04/08/2020 - 12:19am | 0 comments
"Last month, both sides of Libya’s now one-year-old war for Tripoli again agreed to a cease-fire as the coronavirus pandemic spread around the world. But since then, bombings can be heard daily from Tripoli homes as the fighting escalates and the health care system crumbles."
Afghanistan: HRW Urges War Crimes Charges For Jailed IS-Linked Group’s Head
by Radio Free Europe/Radio Liberty | Tue, 04/07/2020 - 12:46pm | 0 comments
"Human Rights Watch is urging the Afghan government to bring war crimes charges against the captured leader of the Islamic State of Khorasan Province, an affiliate of the extremist group Islamic State.
UN Probe Blames Syria, Allies For Civilian Attacks, Avoids Blaming Russia
by Radio Free Europe/Radio Liberty | Tue, 04/07/2020 - 12:29pm | 0 comments
"A United Nations investigation has concluded the Syrian government or its allies was likely responsible for attacks on a school, a hospital, and two other civilian facilities, but the probe avoided specifically blaming Syria's main military sponsor, Russia, drawing rebukes from rights activists."
Taliban Says It’s Walking Away From Talks With Government Over Prisoner Release
by Stars & Stripes | Tue, 04/07/2020 - 10:55am | 0 comments
"Afghanistan’s fragile peace process appeared to be in danger Tuesday as the Taliban said it was breaking off talks with the government about a prisoner exchange, which is a key part of a deal the insurgents signed with the United States."
‘High-Ranking’ al-Shabab Leader Killed in U.S. Strike
by Military Times | Tue, 04/07/2020 - 9:22am | 0 comments
"U.S. Africa Command said an April 2 airstrike in Somalia killed a high-ranking and foundational member of the al-Qaida-linked Islamic extremist group known as al-Shabab."
Exclusive: Planned $1 Billion U.S. Aid Cut Would Hit Afghan Security Force Funds
by Reuters | Mon, 04/06/2020 - 9:58am | 0 comments
"A planned $1 billion cut in U.S. aid to Afghanistan would come from funds for Afghan security forces, according to three U.S. sources, a step experts said would undercut both Kabul’s ability to fight the Taliban and its leverage to negotiate a peace deal with them."
Grounded Curiosity's Professional Military Education (PME) Prezi 2.0.
by Grounded Curiosity | Sun, 04/05/2020 - 9:42am | 0 comments
Grounded Curiosity's Prezi is a network of PME resources including websites, blogs, magazines, journals, podcasts, videos, events, social media sites, news, events, networks, guilds, contests, awards and mentoring opportunities. Continue on to learn more.
The Navy Captain and the Coronavirus
by The Wall Street Journal | Sun, 04/05/2020 - 12:38am | 0 comments
"Social distancing is a luxury you don’t have aboard a nuclear-powered aircraft carrier. So a word about Thursday’s firing of a Navy officer who showed up in the news asking for help containing a coronavirus outbreak on his ship, the USS Theodore Roosevelt."
Violence Imperils Coronavirus Response in Conflict Zones Around the World
by The Washington Post | Sun, 04/05/2020 - 12:36am | 0 comments
"The head of the United Nations has urged a global cease-fire. So has the Pope. Yet violence keeps battering swaths of Africa, the Middle East and Eastern Europe as governments struggle to fight both insurgents and the coronavirus pandemic."
Coronavirus: China, Russia Make a Play for a New Order
by The Australian | Sun, 04/05/2020 - 12:34am | 0 comments
"Academic publishing timelines being what they are, I finished The Dragons and the Snakes — the book about how adversaries have evolved since the Cold War — a year ago, well before the coronavirus crisis. Yet that crisis, along with the oil shock triggered by Moscow’s sudden exit from its OPEC-Plus deal with Saudi Arabia and the resulting collapse in global oil prices, reinforces several of the book’s arguments."
Leader of ISIS in Afghanistan Arrested, Security Officials Say
by Stars & Stripes | Sat, 04/04/2020 - 8:46pm | 0 comments
"The head of the Islamic State group’s Afghanistan affiliate has been arrested along with 19 other militants, Afghan officials said Saturday."
U.S. Hands Over Another Air Base to Iraqi Forces
by Military Times | Sat, 04/04/2020 - 10:58am | 0 comments
"The U.S. handed over the al-Taqaddum Air Base to Iraqi forces on Saturday — it’s the fourth base to be handed over to Iraqi Security Forces over the last several weeks."
Africa's Conflict-Ridden Regions Face Another Existential Threat in COVID-19
by Voice of America | Sat, 04/04/2020 - 1:43am | 0 comments
"In nations ranging from Mali to the Democratic Republic of Congo to South Sudan, years of unrest have weakened governments, deepened hunger and malnutrition, and left crowded camps of displaced people with scant access to health care and hygiene services."
The Military Must Balance National Security Risks With The Health Of Its Troops
by Military Times | Sat, 04/04/2020 - 1:29am | 0 comments
"With the services on track to report more than 1,000 cases of COVID-19 by the end of the week, military senior leadership is looking at a tough choice."
Pakistan Rearrests 4 Men in Daniel Pearl Case
by The New York Times | Sat, 04/04/2020 - 1:08am | 0 comments
"The Pakistani authorities said Friday that four men had been rearrested in the abduction and killing of the American journalist Daniel Pearl after a court overturned their convictions just the day before. The government will appeal their acquittals to Pakistan’s Supreme Court, officials said."