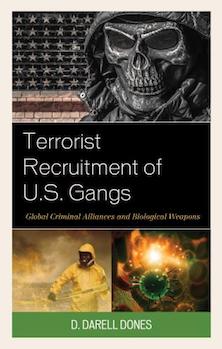 Terrorist Recruitment of U.S. Gangs: Global Criminal Alliances and Biological Weapons examines parallel terrorist-gang activities and prevailing psychosocial factors to explain the varying radical beliefs, causations, and behavioral mindset of these criminal partnerships. It suggests that international terror groups might join with domestic street gangs to produce a mass casualty event.  The book examines whether terrorist groups have the capability to recruit and employ U.S. gangs to carry out terrorist attacks.  An analysis of this kind would provide an invaluable contribution to both professional and academic communities.

D. Darrell Dones, author of Terrorist Recruitment of U.S. Gangs, holds a PhD in Biodefense from George Mason University.  He applied his experience as a retired special agent for the Federal Bureau of Investigation’s (FBI) Behavioral Science Unit (BSU) to the work.  As he transformed the culmination of his academic doctoral research into a commercial book, the author attempted to provide a tool that could be used by all levels of law enforcement.

The work is divided into an acknowledgements section, an introduction, 5 chapters, 6 appendices, a bibliography, and an index. The bibliography is relatively well developed and contains approximately seven pages of citations (pp. 139-145), all of which are dated earlier than 2011 and most (all but 40) before 2005.  The index (pp. 147-150) is functional.  Chapter one presented the study issues, including the proposed significance and timeliness of the study, although no explanation was given why the manuscript went unpublished for eight years.  Chapter two highlighted the history of gangs, terrorism, and WMD, with an in-depth analysis of each and unsupported speculation of the existence of a mix of the three.  Chapter three addressed methods and data as well as identified the foundational question, whether terrorist groups have the potential to recruit gangs for a biological or WMD attack.  Chapter four summarized the findings; consisting of the perceptions, speculation, and conjecture of several unidentified experts, whose qualifications were not clearly explained, which left the author’s criteria for their selection notably vague.

The fact that the author wanted the text to “assist law enforcement intelligence detection, early warning signals, and the timely dissemination of critical information to homeland security” was made clear to the reader (p.8).  Unfortunately, in addition to the extensive time delay in publication (and the absence of other published material by the author), that goal seemed to have been unsatisfied.  Early on, the author noted there was “no definitive evidence or empirical data linking any terrorist organization with the recruitment of any U.S.-based gangs to use biological WMD against the United States” (p.3).  Surprisingly, given the advanced intellectual level a gang’s leaders would need to be capable of using biological weapons, no mention was made of the Third-Generation Gangs (3 GEN Gangs) Model identified around 1997 by John P. Sullivan[1] and promoted in subsequent writings with Robert J. Bunker.[2]  That model discussed the evolution of street gangs through Turf (1st), Market (2nd), and Mercenary/Political (3rd) Generations of sophistication and how the more evolved 3 GEN Gangs—Mara Salvatrucha (MS-13) and Los Zetas type entities—were a significant threat to domestic security, despite being a numerical minority representation among gangs.

The author cited foundational gang researchers, though none that primarily or regularly focused on either adult criminal organizations or the advanced level of organized criminality necessary for a gang to engage in the suggested activity—deploying biological weapons or WMD.  The author failed to distinguish youth gangs from more advanced adult gangs, extensively exploring the use of gang activity as a means of survival in a low income, poverty-stricken areas—indicators of youth forced into association with a neighborhood-based criminal organizations and not the author’s proposed terrorist activities.  The author leaned heavily on the research of Malcolm Klein[3], George Knox[4], and other traditional gang researchers who have not limited their studies to youth or adult gang members.

Klein and Knox often focus on gangs made up of juveniles, while the advanced level of activity the author suggested indicates involvement by adult gang members. In the past, many communities have not considered adults when they refer to gang.[5]  In fact, it was in the mid-to-late 1990s that the shift from majority youth to majority adult gang members occurred, according to the National Gang Center, then known as the National Youth Gang Center.  A study not long afterward found a significant increase in the average age of gang members from 20.03 to 26.59 between 1996 and 2006.[6]  By the mid-2000s, many street gang members were in their 20s and 30s, and most were in their late teens and early 20s.[7]  The paradigm shift of gang composition is reflected in the following relevant studies’ findings of gang member demographics:

Klein and Maxson[12] were cited as a reference for the existence of 30,000 extremely violent U.S.-based gangs and over 1,000,000 street and prison gang members. For a 2020 (or even a 2012) publication, that was a secondary source at best, and quite dated. Incidentally, the author mistakenly reported there were 30,000 gang members within the U.S. and its territories (p. 59).  At last count, the FBI National Gang Intelligence Center [NGIC] reported roughly 1.4 million gang members in the United States at the end of 2010.[13]  That figure represented an increase of 400,000 over the conservatively estimated 1,000,000 of the prior (2009) NGIC estimate, which represented 212,000 more gang members (26% higher) than the 2007 report. There has been no official estimate of the number of gangs or gang members since 2011 by the NGIC.

Also surprising was the author’s organizational choice for a dissertation study on advanced gang tactics: The Mara Salvatrucha (MS-13), Gangster Disciples (GD), and Crips were chosen for the study because they had the “greatest potential ability to radicalize and conduct a terrorist alliance for criminal intent using biological WMD” (p.1), an unsupported claim made early on by the author.  While those were admittedly large gangs, only two have been identified as advanced with the 3 GEN Gang model, and none of them (or any of their traditional affiliates) have a documented or publicly established propensity to engage with either terrorists or members of the Muslim religion.

While the text openly suggested it was prepared to produce “new insights and knowledge on whether it is plausible for gangs and terrorist interactions or alliances actually to exist” and was apparently inspired by “recent law enforcement speculation that … gangs are being recruited by Al-Qaeda and Taliban Terrorist Organizations” (p.2-3), the book was clearly a minimally altered revision of the author’s 2012 dissertation “Terror In Plainview: Terrorist-Gang Threats Of Biological Weapons Usage,” tailored to academics.

Some scholars have suggested that gangs in the U.S. cultivate connections to terrorist groups and threaten the homeland security of the U.S.[14]   As an example, Rogers suggested that the definitional similarities between gangs and terrorist groups were superficial, as gang members were most interested in committing criminal activities while the goals of terrorists were related to inflicting massive numbers of casualties and crippling the U.S. economy.[15]  Rogers’ analysis of street gangs more closely defined those in the first and possibly second-generation gangs as described by Sullivan and Bunker.[16]

In closing, I see great value in this type of work for national security readers as it identifies a blind spot for security and law enforcement professionals using open-source intelligence.  However, if inaccessible intelligence were being used to support the perceptions and speculations identified, military and law enforcement professionals would be wise to engage the material in another source.  Terrorist Recruitment of U.S. Gangs: Global Criminal Alliances and Biological Weapons would be of increasing interest to U.S. military officers, law enforcement officials, and national security scholars in the future if it provided substantive and timely information.  Nevertheless, this text provides a starting point for that inquiry.

Carter F. Smith, J. D., Ph.D. is the Graduate Coordinator for the Department of Criminal Justice Administration at Middle Tennessee State University, in Murfreesboro, TN. As a U.S. Army CID Special Agent, Carter was involved in military and federal law enforcement for over twenty years and identified the growing gang problem in the military community in the early 1990s, later starting the Army’s first Gang & Extremist investigations team at Fort Campbell, Kentucky. Carter received a Ph.D. from Northcentral University after completing his dissertation on military-trained gang members. He received a law degree from Southern Illinois University.  Carter has provided training on Gangs and their impact on the community to many gatherings and conferences, including those sponsored by the Alabama, Arizona, Florida, Georgia, Mid-Atlantic, Mississippi, North Carolina, Northwest, Oklahoma, Southern California, Southern Nevada, and Tennessee Gang Investigators Associations, the Academy of Criminal Justice Sciences, the National Crime Prevention Council, the Regional Organized Crime Information Center, the National Gang Crime Research Center, the Southern Criminal Justice Association, the Department of Justice and the U.S. Army.  He has written many articles, consulted with several media outlets, written two textbooks on gangs, and has appeared twice in the History Channel’s Gangland series. He was a founding board member of the Tennessee Gang Investigators Association, a recipient of the Army CID Command Special Agent of the Year award and is a three-time recipient of the Frederic Milton Thrasher Award of the National Gang Crime Research Center. Carter recently published the book Gangs and the Military: Gangsters, Bikers, and Terrorists with Military Training.

I determine delighted to…

I determine delighted to read such a valid reference. The writer has a tremendous career in conveying this amazing amount of information to us via this blog. Maintain an acceptable outcome. I am actually accomplishing a compilation thought and I am a geriatric author of reading online reviews writing.

I feel delighted to read…

I feel delighted to read such a good post. The author has a great job in sharing this great piece of news with us through this blog. Thanks. Keep up the good work. I am also doing  a book review and i am a senior writer of book review writing.

Thanks for your post, I am very interested in this topic, I have already studied a lot about it. I note that without a certain base of information it is difficult to study and understand such things, but I am a 4th-year student and my direction in training allows me to understand the seriousness of this topic. I have already written a lot about this myself. I have a useful service for colleagues who may need help writing a dissertation on this topic, top websites will definitely be useful, because you can study the review on the top 10 best dissertation writing services right now, these services can definitely be trusted, I regularly use it if I urgently need advice from experts in the selection of the top written service.