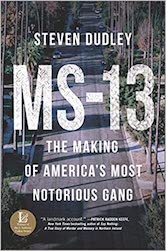 MS-13: The Making of America’s Most Notorious Gang represents a new work authored by Steven Dudley (@stevensdudley).  The author is a respected investigative reporter focusing on Latin America, co-director of InSight Crime, and a Small Wars Journal-El Centro Fellow.  He is fluent in Spanish and Portuguese, has lived in Latin America for over fifteen years and has traveled extensively within it, and earlier wrote Walking Ghosts: Murder and Guerrilla Politics in Colombia (Routledge 2004).  The author has also recently come off co-directing a three-year US Justice Department grant funded study on the gang in three of its major geographic clusters in Los Angeles, the DC metro region, and El Salvador (p. 17).

The main emphasis of the work focuses on MS-13’s inherent contradictions and disputes the Trump administration’s extreme demonization and politicalization of the gang—comparing it to al-Qaeda and overplaying the “criminal alien” immigration threat components that it represents—in order to pander to that administration’s voter base (p. 15).  At the same time, though, the brutal nature of the gang and the devastating effects it has on communities is recognized (p. 15).  Specifically, Dudley states:

…While the MS-13 does have an international presence, it is a hand-to-mouth organization whose criminal economy is based mostly on small-time extortion schemes and petty drug dealing, not international drug trafficking or sophisticated corruption.

In fact, the gang is perhaps better described as a loosely knit social and criminal community that reinforces its bonds via extreme versions of individual and collective violence. And it is as much the result of bad individual decisions as it is the result of flawed US and Central American policy, and the exploitative and unequal economic systems they foster (p. 16).

The work chronicles the lives of various MS-13 gang members—most notably Norman and his family (their names have been changed to protect their identities), the Sanchez brothers, and others.  The streets of Los Angeles and regions within El Salvador represent the primary geographic focus of the work, with the lives of the main characters, fragmentary immigration stories, and the history of MS-13 (as well as vignettes of the civil war in El Salvador) playing out.  Of necessity, the gang’s great rival—18th Street (Barrio 18)— is also touched upon within the work, as is gang life in prisons and the initial struggle against La Raza in El Salvador, the role of the Mexican Mafia (La Eme) in controlling the gang in Los Angeles, US national policy towards MS-13, and a host of related subject matter.  Consequently, the gang’s presence in Honduras, Guatemala and to a lesser extent Mexico, as well the US Eastern Seaboard and Texas and other states are either not focused upon or only tangentially addressed.

The cover of the work is simple yet effective—it shows the palm-laden image of North Hollywood Boulevard.  The book has been very well received, having won the J. Anthony Lukas Award and getting significant media attention and praise. It is written for mass market appeal, with a storytelling focus upon the lives and experiences of its main characters, rather than specialized academic or public security professional sectors which make it an engaging journalistic read.

The author’s ideological orientation is centrist trending left which imbues the work with a skeptical view of human governance in both its autocratic (Salvadoran) and even democratic (United States) variants in relationship to society’s underclasses and cast offs.  This gives the impression that MS-13 members (and often their dysfunctional families) are victims of global capitalism that should be pitied—while the abused become conditioned (even groomed in a sense) to become the next generation of abusers.  These broken individuals suffering PTSD (post-traumatic stress disorder) and a host of other mental and physical maladies perpetuate the deadly cycle of despair, criminality, and, often, outright barbarism.

The main section of the work is divided into three parts; Part I: Getting In (1979-1990), Part II: Getting Serious (1990-2010), and Part III: Getting Out (2010-2019), comprising fourteen chapters.  This section mimics an MS-13 member’s gang experience in which “you are enveloped, become serious, and then try to leave” (p. 15).  This journey is archetypal and reminiscent of Dante Alighieri’s 14th century encounter with souls on their path of suffering and redemption.  The work also contains basic maps, a timeline, an author’s note, and an introduction in the preliminary part of the book and acknowledgements, methodology and notes, notes on chapters, bibliography, glossary of major gang terms used in this book, and index components in its closing parts.  The notes on the chapters section (pp. 299-319) is a meticulous resource and underline the extensive research efforts that went in the work.  While an image gallery of some sort would have been useful for the reader—especially as it relates to gang graffiti, tattoos, and the main subjects of the text—its exclusion does not detract from the book.

A few useful domestic policing and federal law enforcement lessons learned (glimpses into the gang over geographic space and time) provided by the work are:

•  Back in the early 1990s, the MS-13 member known as ‘Satán’ used the military skills that he earlier gained while in the El Salvadoran military to better organize and train his clique the Fulton Locos in Los Angeles.  This included the positioning of destroyers (i.e. abandoned houses used as gang hangouts, partying spots, and torture chambers) on dead-end streets, doing recon on opposing gangs, corralling rivals (i.e. creating kill zones), scouting escape routes, and weapons management (p. 108).

•  The evolution of MS-13’s growing illicit extractive capacity in El Salvador was highlighted.  Initial one-time “contributions” (renta) from bus companies were shifted to monthly or weekly extortion payments.  These payments were based on quantitative metrics derived from bus numbers on a specific line or the passenger ridership levels—this required the fielding of gang associates acting as counters.  Short and late extortion payments resulted in dozens of bus driver deaths that ultimately forced the companies into submission.  Eventually, MS-13, or their proxies, were expected to be written in as bus company owners (p. 187).

• The role of women in MS-13 has shifted over time from the first few decades of the gang’s existence when they could become full-fledged members (subject to a 13 second beat down as opposed to being sexed in) and having limited leadership roles.  The gang’s orientation towards women has become increasingly misogynistic and hostile, with the gang’s chavalas (little girls) now falling under a ‘trust no bitch’ mantra (p. 167).  Much of this antipathy stems from the Brenda Paz case in the early 2000s in which she as a DMV (DC, Maryland, Virginia) region member turned confidential informant (CI) against the gang (pp. 175-176).  She was heinously butchered for her betrayal of MS-13.  Similarly, other women affiliates have been gang-raped and then torture-killed for real and imagined transgressions against it.

• The inherent tension between MS-13’s networked versus hierarchical organizational patterns are evident in the work—both exist as components of a hybrid criminal confederation structure.  Dudley, however, appears to emphasize the C2 networked components over the hierarchical and, in the process, attribute to it a small-time—even pathetic hand-to-mouth—form of ‘criminal tribalism.’  This may underappreciate MS-13’s capacity for the production of self-replicating clicas (cliques) in new environments that the gang exploits.  This gives the organization a biological resiliency much like a post-modern social cancer spreading within the neighborhoods and regions that it infects.  Such a perception is derived from Dudley’s astute observation that “This is the gang’s central paradox: the MS-13 is a surrogate family and a vicious criminal organization” (p. 17).  Still, hierarchal overlays such as the paro (initiate), chequeo (on probation), and ‘homie’ (member) levels up through the ranflero(leader) levels are highlighted (pp. 220-221, 340-341).

The manuscript is devoid of the 3GEN (3rd generation) gangs and criminal insurgency constructs—initially developed by Dr. John P. Sullivan—which have been applied to MS-13 research in Small Wars Journal and other professional and academic venues.  A short mention is merely made of how the gang “was starting to look like an insurgency” due to its increasing organizational sophistication via the ranfla (leadership council) and programs (geographic clique groupings coordination) initiatives in El Salvador (p. 188).  Also absent is a peripheral delve into spirituality—dark or otherwise.  This is possibly due to the fact that such a foray is at odds with the center-left secular analysis undertaken in the work.  Another consideration could be the inherent danger that instances of torture-killings mixed with religious syncretism represent—it could potentially ‘fan the flames’ of populist presidential administration hysterics related to MS-13 offerings to “the Beast” (la Bestia).  Minimally, the narrative discussed in the work is that joining the evangelical church (p. 221) in El Salvador is viewed as a ticket out of the gang as it is in the US (p. 229).

Complementary genre works to Dudley’s MS-13 are The Hollywood Kid (2019) by Óscar Martínez and Juan José Martínez and the much earlier and at the time groundbreaking This is For the Mara Salvatrucha (2009) by Samuel Logan.  Other useful and newer contextual readings include Operation Devil Horns (2019) by Michael Santini)—set primarily in San Francisco—and A Year Inside MS-13 (2019) by Juan José Martínez d´Aubuisson and State of War (2020) by William Wheeler—set mostly in El Salvador.  In summation, MS-13 is a welcome addition to the growing scholarship on this street and, in the case of the Northern Triangle of Central America, prison-based transnational gang.  The book is extremely well written and extensively researched and benefits from Dudley’s many years of investigative focus upon MS-13.  The work greatly helps to de-sensationalize and de-politicalize the gang and show that more nuance must be brought into our understanding of MS-13’s organization and the behaviors and actions of its individual members.