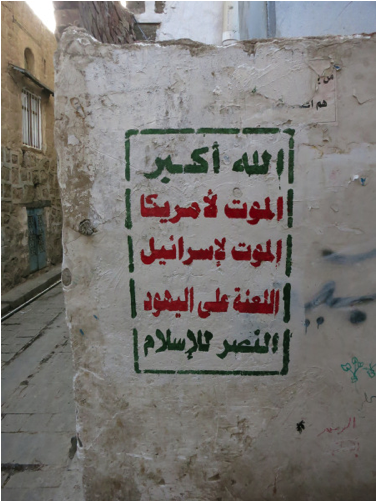 “God is great … Death to America … Death to Israel … Curses on the Jews … Victory to Islam.”

C. Elliott, Dispatches from the Periphery (By Permission), https://caugustelliott.com/2015/01/30/sanaa/.

On 11 March 2021, the Iranian-aligned Houthi insurgents unveiled a variety of so-termed ‘Made in Yemen’ weaponry. Called the Martyr Leader Exhibition for Military Industries, Houthi leaders showcased new armaments and other munitions.[1] According to the accompanying Yemen based news outlet Taiz News,this is a part of the broader mission to achieve certain strategic objectives by the Houthis. The key translated quote is:

The chairman of the Yemeni Supreme Political Council congratulated the Yemeni armed forces and the people at the unveiling ceremony of the new weapons, saying that these strategic achievements are a victory for the Yemeni people.[2]

The new armaments spotlighted were clustered into the following types of weaponry of interest—drones, missiles, and naval mines.

One of the most widely discussed new drones appearing was the Samaad-4. According to Yemeni news source Taiz News, Samaad-4 has a range of 2000 km. Its predecessor, Samaad-3, was able to allegedly reach Saudi oil refineries and other vital installations. Various types of munitions were attached to the drones in addition to explosive warheads (for single mission fixed wing drones). For multi-mission fixed and rotors drones, these included explosively formed penetrators (EFPs), which have an anti-armor role, as well as bomblets for anti-personnel use.[3] The key translated quote is:

The new Yemeni weapons, ‘Made in Yemen,’ may carry many messages to the enemy.[4] 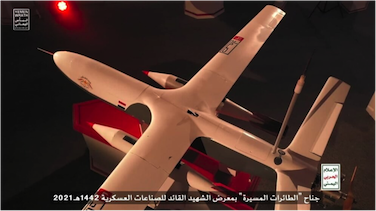 The Houthi-aligned website Ansar Allah published a number of images from the exhibition, including those showcasing the Khatif missile affixed to the Samaad-4: 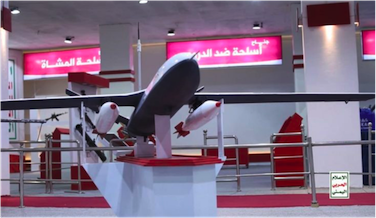 Following are images of the Samaad-2 (camo) and Samaad-3 (white): 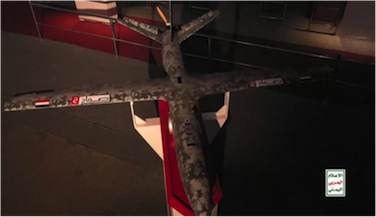 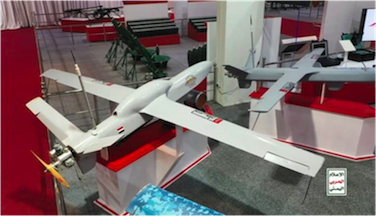 According to Iranian based Mehr News, Houthis also unveiled an upgraded version of its Zulfiqar medium range missile. This missile is believed to be made with Iranian components. The Iranian version of the Zulfiqar missile is believed to have a range of 700 km. The missiles highlighted at the exhibit represent both ballistic and cruise missile systems with infrastructure and military facility and forces targeting capabilities. The ballistic missiles also represent a growing ‘strategic deterrence’ capability as ranges and payloads increase in that they can be utilized in a very basic countervalue (i.e., civilian population) ‘terror inspiring’ role against Riyadh or associated targets. The key translated quote is:

These developments are all part of an active deterrent policy against the invading Saudi-Emirati coalition.[5] 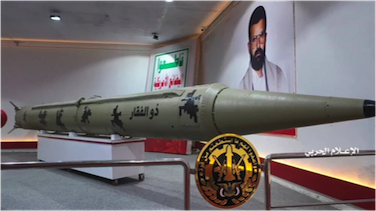 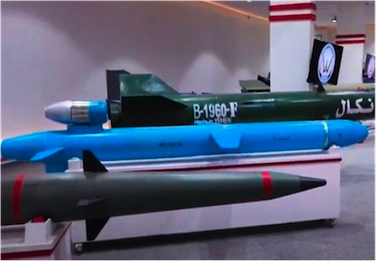 Houthis have also received Iranian assistance with a variety of naval mines. Naval mines are a key component of Iran’s Islamic Revolutionary Guard Corps – Navy (IRGCN) and serve as a strategic component in the Strait of Hormuz and the Persian Gulf.[6] Iranian-state media have frequently showcased indigenous mines for decades, stemming as far back as the Tanker Wars. Images reveal that many are heavily influenced by Iran. Naval mines pose a significant challenge to strategic oil routes, particularly the heavily trafficked Bab al-Mandeb—the strait between the Arabian Peninsula and the Horn of Africa. Simple contact mines can be moored to the ocean floor with a weighted base and a cable for set depth placement to create designated mine fields in choke points or can be allowed to drift freely on the surface to become a random maritime hazard. Below are images of Kharir 1, 2, and 3 contact mines from the exhibition: 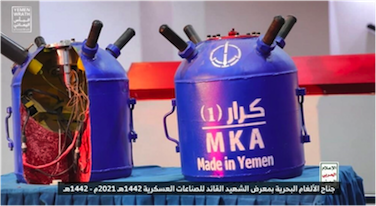 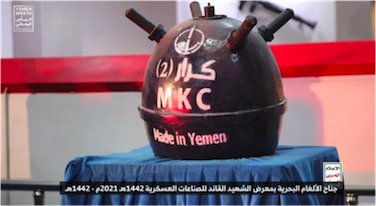 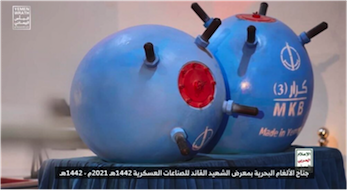 The U.S. and Saudi Arabia have long accused Iran of supplying the Houthis with drones and other weaponry, which Tehran has consistently denied. The drones in particular have long been considered to be composed of Iranian made parts, though the Houthis claim that they are domestically made. Since February, the Houthis have escalated their attacks against Saudi Arabia. Most recently, on 25 March 2021, an array of drones and missiles attacked critical Saudi cities, according to Al Masirah. The Houthis allegedly used 18 drones and 8 ballistic missiles to attack Saudi Aramco facilities in Ras Tamura, Rabigh, Yanbu, and Jizan and the King Abdulaziz base in Damman. Called the “National Day of Steadfastness Operation,” the Houthis claimed the use of 12 Sammad-3 drones and 8 Zulfiqar, Badr and Sa’ir ballistic missiles. According to the article, Saudi military sites in Najran and Asir were targeted by six Qasef-2 drones.[7] Despite this exhibition and an uptick in targeted attacks, casualties and critical damage to infrastructure are rare although this may not be the case in the future.

The current technical capabilities of the Houthi armaments industry are very much in question. The insurgent group—essentially a Zaydi Shiite movement backed by Iran—has been actively engaging the Yemeni Sunni-majority government since 2004. The Houthis function as an Iranian quasi-state client group similar, in some ways, to Hezbollah and have close ties to the Islamic Revolutionary Guard Corps (IRGC).[8] The group which controls the Western regions of Yemen seized the capital city Sana’a in September 2014.[9] Most of Yemen’s population of 30 million people are in Houthi controlled territories, giving it a sizable demographic base with about a third of the population Shiite in religion. Still, given the impoverished nature of the war-torn country, with 80% of the people requiring humanitarian assistance and 50% on the brink of starvation, this population base is not economically—much less industrially—productive.[10]

Thus, the claim that the military grade armaments showcased at the Martyr Leader Exhibition for Military Industries can be said to be ‘Made in Yemen’ has to be considered ‘an exercise in the interpretation of semantics.’ The claim can also be viewed as being tied into ongoing Iranian propaganda narratives (in coordination with the Houthis) directed against both Arabic and English speaking audiences.

What has been pieced together from intelligence reports, in country visits, and field interviews by the Houthi analyst Michael Knights is that:

The accumulated balance of evidence strongly suggests that Iran and Lebanese Hezbollah have developed powerful military and technical advisory missions in Yemen since 2014. According to Yemeni leaders present in Sana’a between 2014 and 2017, IRGC advisors were confined to Sana’a and to a missile construction site in Sa’ada. These advisors were “like a diamond to the Houthis” and were “kept in safe places to help give operational and strategic advice and guidance on tactics and procedures.”86 Lebanese Hezbollah operatives were more numerous and were not only kept in Sana’a and Sa’ada but also allowed forward as far as command posts and the Red Sea coastal defense sites.87 … A number of small-scale military industries have been established since 2014 to support the Houthi war effort and maximize domestic reuse and production capabilities, in order to minimize the effect of the international arms embargo on the Houthi movement … As mentioned earlier, a missile construction hub was transferred from Sana’a to Sa’ada. In Hodeida, a drone workshop operates, drawing on a supply of rolls of fiber-glass to make airframes.91[11]

Further per Knights, “In 2017-2018, IRGC advisors were integral to the development of several advanced new platforms well beyond the capacity of Yemeni technicians”[12] and that:

…it is clear that Iran and the Houthis have developed a small but effective military industry in Sanaa and Saada. As the UN Panel of Experts documented, this industry fuses imports from Iran (e.g., drone engines, guidance systems, liquid/solid-fuel components) with domestically available military items and imported industrial materials (e.g., fiberglass).[13]

Additionally, according to the above cited UN report:

The Panel estimates that the Houthis diverted at least $1.8 billion in 2019, originally destined to fill the coffers of the Government of Yemen, pay salaries and provide basic services to citizens, to fund their operations.[14]

With IRGC (and Hezbollah) technical personnel and material resources situated in Yemen, the illicit shipment of weapons components from Iran (and other countries, including China)[15] ready for assembly, and a dedicated Houthi armaments budget (as some % of the diverted Yemeni Government revenues), the missile and drone   higher end weaponry at the exhibition can conceivably be termed “Assembled in Yemen” while the lower technology naval mines (with their blatant English labeling) may legitimately be claimed to be “Made in Yemen.”

In broader context, the Houthi Exhibition can be considered as yet another indicator of ongoing pan-Shiite geo-political activity orchestrated by the Iranian regime as it challenges Sunni states (de facto Western allies) for greater strategic influence in the Middle East. At the operational level, the evolving quality of armaments (and their growing quantity) at Houthi disposal—directly tied to IRGC initiatives—will increasingly imperil Saudi Arabian security interests and the sea lines of communication (SLOC) in Western Yemeni waters.

[1] Also see the embedded video of the VIP tour of the exhibit in this news report which also showcases many other munitions. Houthi military officers can be seen providing a tour to Mahdi al-Mashat, president of Yemen's Supreme Political Council. “Yemen: Unveiling new defense achievements, from drones to Sair, Qasem 2, and Quds 2 missiles + video,” Tasnim News (Farsi). 11 March 2021, https://www.tasnimnews.com/fa/news/1399/12/21/2468309/یمن-رونمایی-از-دستاوردهای-جدید-در-حوزه-دفاعی-از-پهپادهای-جدید-تا-موشک-های-سعیر-قاصم2-و-قدس2-فیلم.

[4] The three EFPs placed under the bottom of the Houthi Samaad-2 (see the Tasnim News video) appear to be staged for propaganda narratives as no means of dropping the EFPs for armor targeting purposes (terminal guidance and detonation) exists.

Alma Keshavarz received her PhD in Political Science at Claremont Graduate University. Her dissertation focused on hybrid warfare applied to the Islamic State, Russia, and Iran’s Islamic Revolutionary Guard Corps. She previously earned a MA in political science at the same institution. She also holds an MPP from Pepperdine’s School of Public Policy and a BA in Political Science and English from University of California, Davis. She has held various research intern and associate positions and has served as a graduate assistant at Pepperdine University. Her research interests include non-state actors, specifically Hezbollah, cyber security and warfare, and national security strategy with a regional focus on Middle East politics, specifically Iran, Lebanon, Yemen, and Syria. She has written a number of SWJ  articles and has also co-published a number of the works for the Foreign Military Studies Office (FMSO), Fort Leavenworth, KS. She is fluent in Spanish and Farsi and is a past Non-resident Fellow in Terrorism and Security Studies at TRENDS Research & Advisory.