The truest test for a U.S. Department of Defense (DoD) Foreign Area Officer (FAO) is to serve in a host nation during a crisis, as it provides the opportunity for a FAO to 1) leverage the relationships which they have established; 2) synchronize efforts among U.S., host nation, and international entities; and 3) improve the relationship between the United States and the host nation by effectively highlighting the impacts of successful U.S. efforts through timely and accurate strategic messaging.  While it can be difficult to successfully accomplish these three feats during any one crisis, when compounded with multiple crises, the chance of success dwindles. However, it is in crisis response that the value of a FAO is most clearly demonstrated.   This was the case in November 2020, when the U.S. DoD team in Guatemala—including FAOs within the Office of Security Cooperation and the Defense Attaché Office—effectively responded to five simultaneous crises by planning, coordinating, synchronizing, and executing emergency and humanitarian and disaster relief (HA/DR) efforts in a Joint Interagency and Inter-governmental Multi-national (JIIM) environment.

In November 2020, Guatemala faced five national crises: two back-to-back hurricanes (Eta and Iota), a volcanic eruption, and mass protests over changes to the national budget, all while continuing to address the ongoing challenges of the COVID-19 pandemic. Within a three-week time span, these five crises challenged the county from the capital to the farthest and most remote regions of the country. Hurricane Eta slammed the eastern and central regions of Guatemala in early-November, affecting vast portions of the country, decimating roadways and bridges, while also causing mudslides and flooding that killed hundreds of people and left hundreds of thousands homeless. The sheer scale of Hurricane Eta's impact required the Government of Guatemala to deploy at full capacity. Less than a week later, Hurricane Iota arrived bringing more devastation throughout the country.  Furthermore, while recovering from Hurricane Iota, concurrent demonstrations started in the capital and other major cities in objection to the government’s proposed 2021 budget, severely restricting the Government of Guatemala’s ability to maintain HA/DR efforts while mitigating the spread of COVID-19. 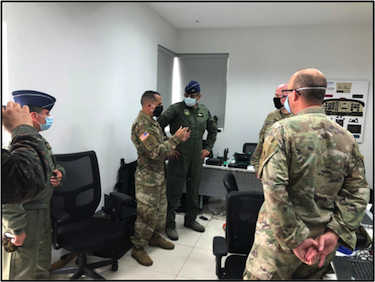 Following Hurricane Eta, the President of Guatemala, Alejandro Giammattei, requested U.S. emergency and HA/DR support from Ambassador William Popp.  Once approved by the Department of State, the DoD team in Guatemala leveraged their relationships within the Guatemalan Ministry of National Defense—established over years—to ascertain what type and quantity of U.S. military response would best compliment the combined efforts of the Ministry of National Defense and the Coordinadora Nacional Para la Reducion de Disastres (CONRED), the Guatemalan equivalent of the U.S. Federal Emergency Management Agency.  With the proper identification of the assistance requested by Guatemala, the DoD team coordinated with U.S. Southern Command (SOUTHCOM) to secure the support of two helicopters (1x HH-60 and 1x CH-47) and their associated crews from Joint Task Force-Bravo in Honduras, along with a communications team from U.S. Special Operations Command South.

Later, when protests erupted in the country, the FAOs leveraged relationships once again to quickly understand the changing operational environment. By quickly ascertaining the nature of the internal security situation and the Guatemalan military’s role, the DoD team was able to adjust HA/DR operations. Simultaneously, members of the DoD team ensured that SOUTHCOM leadership and the country team were aware of the impact of the political situation—supporting the United States government policy development and response to the additional crisis.

Due to the effects of Hurricane Eta, a large portion of the Guatemalan populace were either displaced or isolated, cut off from any government response and/or relief efforts.  The DoD team in Guatemala thereby organized a planning cell in concert with the Ministry of National Defense and CONRED to plan, coordinate, and execute U.S. military emergency response and rescue efforts throughout the country. The DoD team synchronized the U.S. emergency response and rescue efforts with the Ministry of National Defense's daily operations in order to rapidly respond to information provided by CONRED, rescuing or providing immediate emergency relief to numerous citizens throughout the country via airlift.

Following the initial emergency response and rescue efforts, the DoD team’s operations shifted to HA/DR in support of U.S. Agency for International Development’s approved Mission Tasking Matrix, which coordinated, deconflicted, and prioritized the critical needs of the Government of Guatemala identified by CONRED.  While the shifting of operational control and direction from solely DoD-led to interagency can often cause challenges, the FAOs of Team DoD Guatemala smoothly and effectively transitioned due to their thorough understanding of the JIIM environment and ability to leverage their previously-established relationships.  This subsequently allowed for the continuous and successful synchronization of HA/DR efforts—including international efforts provided by El Salvador and Colombia—until all HA/DR missions were complete and the Government of Guatemala could continue relief efforts on its own.

As the protests grew in intensity, the DoD team worked to ensure that U.S. rotary wing assets and the HA/DR effort were insulated from the additional crisis. Effective and deliberate messaging ensured that there were no misconceptions about the U.S. efforts in Guatemala. In addition, the Force Protection Detachment ensured that crews and DoD personnel were aware of the volatile environment and stayed clear of protest areas.

Once the DoD team in Guatemala anticipated that there was going to be a U.S. response to aid the Government of Guatemala, the team began to coordinate with the U.S. Embassy’s and SOUTHCOM’s public relations offices in order to ensure synchronization and alignment in strategic messaging.  Conducted primarily via social media, the messaging highlighted the impacts of successful U.S. emergency response, rescue, and HA/DR efforts within Guatemala.  The DoD team effectively told the story of the U.S. response through the deliberate planning for PAOs to be incorporated in daily operations, capturing, via photographs, the support the U.S. was providing from the capital to rural areas.  Additionally, the DoD team coordinated the approval for a New York Times’ journalist and photographer to board the rotary-wing flights, documenting and subsequently reporting on the U.S. HA/DR efforts within the country, which reached both domestic and U.S. audiences.  The daily strategic messaging in both English and Spanish, highlighted that “the U.S. is indeed a friend in times of need” and reinforced the notion that the U.S. military is more than a war machine, but also a humane force for good within the region. 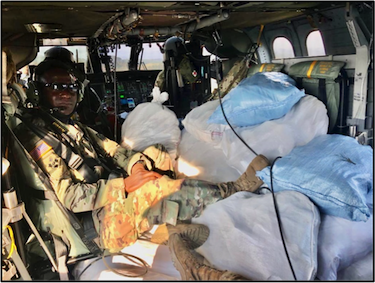 MAJ Ola Ogunlola (A/ARMA, 48B) aboard a JTF-B UH-60 transporting lifesaving relief supplies to remote villages affected by the storms

By the time HA/DR operations concluded, U.S. military efforts in Guatemala had flown 38 missions, delivered 267,050 lbs. of relief supplies and hygiene kits, and rescued or medically evacuated at least 55 isolated Guatemalans successfully.  The U.S. efforts would not have been as successful without the FAOs of Team DoD Guatemala who effectively leveraged their established-relationships, synchronized interagency and international efforts, and ensured timely and accurate strategic messaging.  This success resulted in appreciation from national leaders, the military, and the general population within Guatemala and potentially a renewed commitment to the U.S.-Guatemalan partnership, a partnership that is invaluable to U.S. interests in Central America and the hemisphere.

The views expressed in this study are those of the authors and do not reflect the official policy or position of the Department of State, Department of Defense, or the U.S. Government.

LCDR Matthew N. Hite, U.S. Navy Foreign Area Officer, has served in various policy and intelligence positions including assignments to the National Counterterrorism Center, the Naval Criminal Investigative Service, the Chief of Naval Operations Intelligence Plot, and the Navy Secretariat.  LCDR Hite deployed to Iraq in support of Operation Iraqi Freedom and Afghanistan in support of Operation Enduring Freedom in command and staff positions.  Additionally, he holds a M.A. in Defense and Strategic Studies from the U.S. Naval War College.  He is currently assigned as the Navy Section Chief in the Office of Security Cooperation-Guatemala.

Major Ola Ogunlola, a U.S. Army Foreign Area Officer, has served in various operations, policy, intelligence, and security cooperation positions including the Planning and Operations Officer in the Security Cooperation Office, Haiti; Deputy Chief of the Institution Effectiveness Section at the Inter-American Defense College in Washington D.C.; Deputy Branch Chief of the Latin America Branch at the National Ground Intelligence Center (NGIC), Charlottesville, VA. Major Ogunlola deployed twice in support of Operations Iraqi Freedom as a Platoon Leader and Operation Enduring Freedom in Afghanistan as a Company Commander. He holds an MBA from the University of Maryland University College and a Master of International Public Policy from the Johns Hopkins University’s Paul H. Nitze School of Advanced International Studies. He is currently assigned as the Assistant Army Attache, Defense Attache Office-Guatemala.