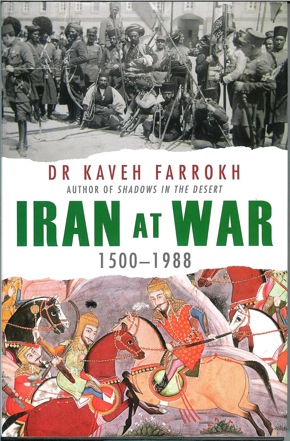 As the United States and the international community faces Iran over a variety of contentious issues from the acquisition of militarized nuclear capabilities to support for the Syrian regime, as well as Hizbullah in Lebanon it becomes necessary for members of the United States Armed Forces and our partners to immerse themselves on book about Iran.  Dr. Kaveh Farrokh of Langara University in Canada’s Vancouver, British Columbia has published a timely volume immersing readers in five centuries of how Persians have waged and conducted war.  The book delves deeply into the history and psychology of warfare and provides a grounding of how Iranians see threats and challenges today.

The book begins with the Safavids, the empire that ruled Persia from 1501 to 1736, and was largely responsible for imposing Shiism in the region, making it the state religion and forcing the conversion of Sunni Muslims, Jews and Zoroastrians.  His insights are fascinating, and include the caste system introduced by the Arabs when they conquered Persia, which led to a yearning for an Islamic system that incorporated and respected Persian identity.  Shah Ismail I, the founder of the Safavid Empire, is detailed and we see a military leader who although was merciless towards Sunnis, personally provided medical care to his soldiers.  Shah Ismail would battle the Uzbeks, Portuguese, and Ottoman.  It was under Shah Abbas I that the Persian army began to acquire gunpowder, and readers will be surprised to learn of the intrigues between the Shiite Muslim Empire of the Safavids and various European monarchs wanting to use the Safavids to divert the growing power of the Sunni Ottoman Empire.  Imagine what the Ottomans could have accomplished if it were not for the Shiite Safavid Empire challenging the eastern edges of their empire.

The section on Nader Shah is exquisite, and contains a few unique tactical innovations, like the use of camels with incendiary materials sent within the ranks of Elephants causing them to panic and turn against their Mugal opponents.  Reading Nader Shah’s campaigns matter for it will give you a grounding on fighting in the terrains as varied as Iraq to Afghanistan.  After the Shah Tahmasp I was attacked by the Ottomans, Afghans and Russians, the Safavid Persian Empire was carved up between these powers.  Nader Shah would reorganize the Persian Army and would be instrumental in restoring the Persian Empire created by Shah Ismail and Abbas, he would also put aside the weak figurehead Shah Tahmasp II and assume rule evolving from Nader Khan to Nader Shah, he is right or wrong Islam’s Napoleon and just as controversial.  Nader Shah use of a highly mobile light cannon, the Zanbourak, that can be packed on camels and set up quickly to amass firepower is a must read.

When you read Farroukh’s historical account through the ages, pay particular attention to battles fought in what is now Iraq and Afghanistan to gain a sense of the complexity of military operations in both regions.  The book continues with the Zand Dynasty (1750-1794) founded by one of Nader Shah’s generals.  Of note, Nader Shah became so paranoid at the end of his reign that he blinded his own elder son and left no real heir, you will notice this problem among a few Safavid rulers.  Under the Qajar Dynasty (1794-1925), the book discusses how Persia adapted to the twentieth century, World War I, you will note the influence of Germans in the modernization of the Persian military, and more importantly to undermine British and French control from within their colonies and possessions.  The book discusses the modernization of the Iranian Armed Forces under Shah Reza Pahlavi, the Pahlavi Dynasty would be Persia’s last ending in 1979.  The amounts of American weapons acquired under the Shah would sustain the Islamic Republic in their war with Iraq.  The section on the Iran-Iraq War is a must read and offers a fresh narrative of the tactics used by the Islamic Republic against Saddam’s armies.  My only critique is that I would have liked to have seen a discussion or even section on Iranian use of proxies like Hizbullah to asymmetrically undermine their adversaries.  That said, the book is recommended for anyone interest in warfare generally, the Middle East, and even Afghanistan.  In short, this is the kind of book worthy of discussion in America’s War Colleges of the 21st century.

We're waiting for a copy to be purchased here at the San Francisco library.

I've seen elsewhere there are a number of minor editing flaws in the work, which serve as detractions.

As for the concluding remarks offered in this review, I think it advisable to change perspectives on Iranian support for Shia intra-State actors, as well as neighbor regimes, that is to say approach their study as one of natural alliiance and shared interests, similar to that of the Anglo-American relationship during WWII.

As for the author's current work on Allied and Axis intelligence and propaganda operations in the World War Two Middle-East, I actually find World War I operations in Turkey, Iran and Iraq a fascinating.topic of study.