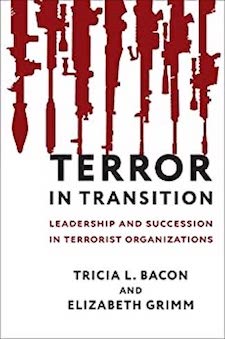 During the past 10 years, a prominent line of terrorism research has studied the consequences of leadership targeting. What happens after militant organizations lose their leaders? Most studies of leadership decapitation have either been case studies of single groups, or quantitative global studies of hundreds of groups. More generally, the terrorism literature has insufficiently analyzed individual leaders of militant organizations —in spite of their obvious importance, and regardless of whether they were killed. To address these issues, Terror in Transition makes a highly valuable contribution to the study of leadership of terrorist organizations.

As a general overview, the book analyzes how terrorist groups adapt to leadership changes. It emphasizes the centrality of the founder of the group, and it creates a typology of successors based on their relationship with the founder’s vision. This typology of successors, which can be seen as a typology of leaders generally, is a major contribution to the study of militant organization leadership. The authors test their theory first with in-depth case studies of four important and diverse organizations: the Ku Klux Klan, Egyptian Islamic Jihad, al-Qaeda in Iraq, and al-Shabaab. It also carries out a medium-n analysis of 33 terrorist organizations, demonstrating the generalizability of the argument.

To describe the book’s contents in more detail, the Introduction begins by pointing out that when terrorist leaders are killed, journalists and scholars speculate about how the group’s violence might change, and how else the leadership loss might affect the group. This uncertainty occurs despite the substantial amount of research on effects of leadership decapitation that has been published in recent years. As the authors point out, advances have been made in understanding leadership removal’s effects—but significant gaps remain. The Introduction proceeds by identifying five types of successors: caretaker, signaler, fixer, visionary, or figurehead. It clearly defines leadership, terrorism, and succession. (It would have been helpful to define terrorist organization as well, and to distinguish “religious groups” from ethnonationalist groups with religious elements.) Elsewhere, social movements and other key concepts are clearly defined. The introduction also provides a road map for the rest of the book.

In Chapter 2, Bacon and Grimm introduce their theory of terrorist group leadership succession—explaining how a group will respond to losing a leader, depending on a variety of factors such as the founding leader’s vision, and whether successors prefer incremental or discontinuous change. The theory sets out several principal building blocks. First, it points out that each group has a “why,” the group’s reason to exist, and a “how,” its means to mobilize resources and carry out actions. This why vs. how framework is useful for any analysis or teaching related to militant organizations. The authors emphasize that these are initially set by the group’s founder. Then, the theory outlines the reasons that leadership transition might occur: death, overthrow, capture/arrest, or relinquishing power. Another key element of the argument is that successors can seek to bring about either incremental or discontinuous change – to the “how” and the “why.”

The combination of these elements, nicely summarized in Table 2.1, shows how these factors lead to five types of successors: caretaker, signaler, fixer, visionary, or figurehead. The authors match up leader types with “changes to framing” (the “why”) and “changes to tactics and resource mobilization” (the “how”). For example, a caretaker has an incremental approach to both framing and tactics and resource mobilization. The fixer, meanwhile, has an incremental approach to changing framing, but a discontinuous approach to changing tactics and resource mobilization. Finally, the model is conditioned by a final aspect: the broader counterterrorism (CT) environment. Groups should respond to leadership loss differently in environments of high CT pressure compared to how they might respond to low CT pressure.

Much of the book, Chapters 3-6, is careful case studies of four prominent and diverse organizations: the early 20th-century Ku Klux Klan, Egyptian Islamic Jihad, al-Qaida in Iraq, and al-Shabaab. These case studies harness evidence from elite interviews, government documents, and other sources. The text draws on fieldwork in Afghanistan, Pakistan, and Somalia. The case studies are enjoyable to read for their rich and clearly written historical accounts. Some examples of interesting details include a review of the role of the Women of the Ku Klux Klan, and an account of the time that al Qaeda leader Ayman al-Zawahiri had two boys executed. The case study of al-Shabaab is especially original and deeply researched. More importantly, the cases clearly and convincingly demonstrate the utility of the authors’ argument.

Chapter 7 further tests the generalizability of the argument on 33 groups, including the four studied earlier and 29 others. This sort of medium-n study is highly valuable, and not conducted frequently enough, especially in a discipline where research usually either focuses on a single case, or (at least) hundreds in quantitative work. The set of 33 groups chosen is interestingly diverse, including mostly Salafi-jihadist groups but also the Turkish nationalist Grey Wolves, the Jewish Defense League, the Afrikaner Weerstandsbeweging, and the Romanian Iron Guard. This section also leads to a data contribution—the appendix includes leadership data on all 33 groups and their 112 leaders, as well as helpful descriptive tables. (A straightforward idea for building on this book’s work would be to expand the data to a larger sample of groups, and then conduct quantitative analysis.)

The conclusion offers valuable summaries and additional analysis, including implications for counterterrorism. The chapter argues that “each of the successor archetypes possesses weaknesses that can be exploited through CT efforts” (p. 194). This highlights the considerable value of the book: that it not only offers a typology and theory that helps us understand terrorist groups, but also that there are clear implications for disrupting these groups’ activities. Acknowledging group heterogeneity, and realizing how some tactics might work better on certain types of groups, is a great contribution. The final chapter also thoughtfully notes limitations of the work, and offers valuable suggestions for future research.

Some readers might have quibbles with certain elements of the book. One debatable issue relates to the scope condition of studying religious terrorist organizations. The book seems to use a rather broad notion of religious groups, not only groups that are primarily religiously-motivated, but groups that have religion as one of their motivational elements. Organizations such as the Ku Klux Klan, the Grey Wolves, and the Iron Guard are arguably more ethnonationalist than religious. One the one hand, this raises questions about how precisely the theory applies to primarily religious organizations. On the other hand, the broad conceptualization of religious terrorist groups can be seen as an advantage—that the theory applies widely.

Overall, Bacon and Grimm have written an outstanding book, essential reading for anyone seeking to understand terrorist organizations, or leadership of violent groups in general.

Postscript: Just as this review of Terror in Transition was finished, the announcement of the killing of al-Qaeda leader Ayman al-Zawahiri became the top news story around the world. This underlines the importance of the topic of the book, and its usefulness for academics, policymakers, and popular audiences.

Brian Phillips is a Reader (Associate Professor) at the University of Essex. He is a co-author of Insurgent Terrorism: Intergroup Relationships and the Killing of Civilians (Oxford University Press, 2022).