Rio de Janeiro's bloody war on crime continues amidst a deepening COVID-19 crisis. The latest killing of at least 24 citizens[1] by police in the city’s northern Jacarezinho neighborhood is a reminder of the persistence of police violence in the battle-scarred city of six million.[2] It is also the predictable outcome of years of belligerent tough-on-crime rhetoric from Brazil's president Jair Bolosonaro and Rio state's recently impeached governor, Wilson Witzel.[3]

The morning raid was supposedly launched to apprehend members of the Comando Vermelho (Red Command), a notorious drug trafficking faction that dominates large swathes of the city. The operation was supposedly triggered by reports that the heavily armed faction was recruiting youth into their ranks. This is an odd justification given the pervasiveness of this practice over the past three decades. The outcomes were disastrous.[4]

Over 250 state police officers stormed into the favela, shooting indiscriminately into homes, buses, and the street. While heavy-handed police operations are routine in Rio de Janeiro, this one generated, according to police officials, the largest death toll of any intervention in the city’s history.[5] The previous record involved the killing of 19 people in 2007 in neighboring Alemao. This one was larger, and at least one officer was also killed.[6] Local residents reported scenes of chaos and terror, with videos showing many cowering to avoid shootouts.[7] 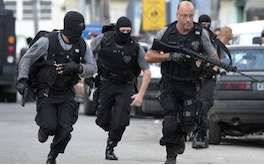 The Jacarezinho massacre is a predictable result of chronic failure of state leadership. Every one of the last six governors of Rio de Janeiro have gone to jail.[8] The latest to be impeached on corruption charges, Witzel, was also among the most hard fisted. His inflammatory rhetoric coupled with the systematic erosion of police oversight emboldened officers to use excessive force. Witzel is widely authorizing the use of snipers in helicopters and celebrating the killing of "bandidos." The latest mass killing was a tragedy foretold.

Rio de Janeiro is a violent city by any standard. There were over 2,400 reported homicides in 2020. At least 1, 245 people were murdered by the police the same year according to ISP, the state's public security institute.[9] While this represents a decline compared to 2019, a record-breaking year of police violence, it is still one of the highest levels of police killings anywhere on the planet.[10] By way of comparison, the US registered 989 killings in 2020, in a population of 331 million.[11]

The recent police operation was also likely a violation of Brazil’s federal law. The Supreme Court prohibited police operations in Rio de Janeiro during the COVID-19 epidemic in 2020.[12] Police killings and other types of violence fell dramatically in the wake of the ruling. But police violence started escalating in the latter half of 2020 and into 2021, including after state authorities terminated police oversight bodies.[13]

The outrageous violence plaguing Rio de Janeiro will continue so long as repressive policing continues. The wave of killings is a reminder that hyper militarized interventions are not just ineffective, they are counterproductive.[14] They generate massive collateral damage, both physical and psychological, and also undermine trust of citizens in law enforcement. A commission of inquiry and disciplinary action are mandatory, and a radical change of police culture is essential.

[2] Robert Muggah, “How did Rio's police become known as the most violent in the world?” The Guardian. 3 August 2021, https://www.theguardian.com/global-development-professionals-network/2016/aug/03/rio-police-violent-killing-olympics-torture.

[8] Gabriel Barreira, “Witzel é o 1º governador a sofrer impeachment no RJ desde a ditadura; outros 5 foram presos em 3 anos [Witzel is the first governor to be impeached in RJ since the dictatorship; another 5 were arrested in 3 years].” G1 (Globo). 1 May 2021, https://g1.globo.com/rj/rio-de-janeiro/noticia/2021/05/01/witzel-e-o-1o-governador-a-sofrer-impeachment-no-rj-desde-a-ditadura-outros-5-foram-presos-em-3-anos.ghtml.

[11] Fatal Force: 985 people have been shot and killed by police in the past year.” Washington Post. 5 May 2021, https://www.washingtonpost.com/graphics/investigations/police-shootings-database/. Dataset available at https://github.com/washingtonpost/data-police-shootings.

This blog is  very…

This blog is  very informative

This blog is what I was…

This blog is what I was looking for. This piece of content will really help me. Thanks for sharing it. visit my sites: click here

I don't get it, you wrote this with no solution suggestion?