Quantifying Chaos in the Era of COVID19

Reconceptualizing Threat Across the Western Hemisphere

The Barriers of Bias

Social Scientists dedicate years of education and professional practice towards helping others understand and mitigate cognitive biases. Human bias and associated errors manifest from subjective realities we often project onto individuals, groups, and subsequently- perceived threats. For the military, this can have considerable implications as to how we prioritize and effectively combat emerging threats. Transregional crises such as the global coronavirus (COVID19) pandemic have the capacity to exacerbate a variety of threats as fragile states struggle to ensure national security while simultaneously attempting to address health crises.

While it is imperative to leverage personal military experiences, it is also important to recognize our experiences have the capacity to result in inaccurate assumptions, conclusions, or implicit bias[1]. As a result, we may be dedicating resources towards causes that yield less return on investment (ROI) while more critical threats flourish undetected.

The simple solution is to integrate data into our decision-making process rather than solely relying on observations of deployed forces, leadership experience, or self-assessments. At the very least, we are then able to validate our assumptions prior to acting and maximize the effects of our collective efforts.

To serve as an example, I lead the Data-Driven Decision-Making (D3M) Cell in the U.S. Special Operation Command South (SOCSOUTH) J39. This talented team of Social and Data Scientists equip military leadership with D3M capabilities with clearly defined metrics and threat assessments. Fortunately, SOCSOUTH leadership is receptive to new findings and leverage our analytics to articulate evolving courses of action (COA). Thus, we are able to induce minor strategy pivots to ensure the command has a presence in the right areas of interest (AOIs) to fully support partner nations (PN) and reduce indirect threats to the United States.

Throughout the course of my research in 2020, however, I came to realize the extent to which our known threats sometimes fail to align with target audiences’ perceived threats across U.S. Southern Command’s (SOUTHCOM) Area of Responsibility (AOR). This holds great significance because cooperation from specific target audiences can be essential to achieving a desired end state. If a target audience perceives our priorities as irrelevant, it is highly unlikely we hold the capacity to influence any form of behavior change.

For Psychological Operations (PSYOP), this poses a severe issue, as well as a new opportunity: educate target audiences with credible data and tailor associated messaging.

As a Social Scientist, it was prudent to analyze the extent to which our perceived threats align with that of our target audiences to ensure we hold a full understanding of our operational environments, produce effective PSYOP communication campaigns, and create statistical atmospheric baselines. In my experience, only the strongest leaders are willing to have their opinions, assumptions, and ultimately their decisions challenged by statistics. Fortunately, I served a supportive leadership who found merit in this research effort to challenge our assumptions and clearly define the extent to which any potential priority divergences exist. The Global Research and Assessment Program (GRAP) became our gateway to this research endeavor.

GRAP activities generally include atmospheric assessments, surveys, and quantitative insight to educate military leadership on the environments in which they hold episodic or persistent presence to support a PN. In this study, findings were derived from a combination of GRAP surveys, which were conducted in April and May of 2020 in six AOIs: Colombia, El Salvador, Ecuador, Panama, Peru, and Trinidad and Tobago. The diversity of AOIs across the Caribbean and Central and South America provide us an initial glimpse at any potential competing priorities between us and our own target audiences.

Image 1 portrays these cumulative findings when survey respondents from these PN countries were asked which threat(s) pose the greatest threat to self and family.

Unsurprising given the time of survey dissemination, COVID19 was dramatically prioritized as the primary threat of concern. What I found rather unexpected was that natural disasters and effects of climate change far outweighed perceived threats posed by violent extremist organizations (VEOs) and External State Actors (ESA).

To put this in perspective, survey respondents prioritized natural disasters roughly 10x greater than malign ESA presence and activity. An argument could be made that target audiences do not fully understand the extent to which ESA presence and activity is indeed malign and capable of directly implicating their well-being. On the other hand, perhaps it is we who are not fully understanding and leveraging opportunities to support our target audiences in times of natural disasters, climate change, or related health crises. For example, increasing collective efforts between Civil Affairs (CA) and PSYOP to work with vulnerable populations across the AOR with indirect potential to increase support for the United States. This alone is capable of fostering key political and military relationships to garner access and placement for strategic and operational advantages.

While there is a degree of variance across countries, this translates into concern surrounding inadequate standards of medical care. Image 4 illustrates the 63% of survey respondents who perceive their local hospital and emergency response system as unprepared to support their community’s needs in the event of a crisis. Together, these findings provide context for Image 5, which illustrates the 43% of survey respondents experiencing elevated levels of fear[2]. Whether or not these levels of fear are consistent over time or a recent increase attributable to COVID19 remain unclear due to data limitations.

What is clear, however, is that human and health crises are far outweighing target audiences’ perception of threat relative to gangs, ESA, narcotics, etc.

So why the divergence? The underlying purpose of this paper is not to suggest SOUTHCOM perceived threats and priorities occurring throughout the AOR are more vital than that of our target audience. However, we now know a divide exists and there resides a multitude of implications such as inaccurate messaging, delivering the wrong kind of civil support, and a renewed focus on human crises which exacerbate pre-existing national security crises.

Out of both academic interest and obligation, I always compare survey findings to existing quantitative measures. Neither is “right” or “wrong,” but it provides another means of comparison. The Fragile States Index’s Demographic Pressures variable takes into consideration levels of demographic pressures associated with natural disasters, disease, and resource scarcity. Image 6 is a 15-year trend analysis leading up to COVID19, which I created to help us better understand if target audience fear and subsequent behavior changes are unsurprising.

As Image 6 portrays, every surveyed country statistically was improving with regards to demographic pressures. This suggests prior to COVID19, population constraints related to disease, natural disaster, and resource scarcity were considerably improving organically over time. However, this is on a scale out of 10. Thus, as recent as 2019 some countries like El Salvador and Peru were still facing considerable hardship prior to the emergence of COVID19. 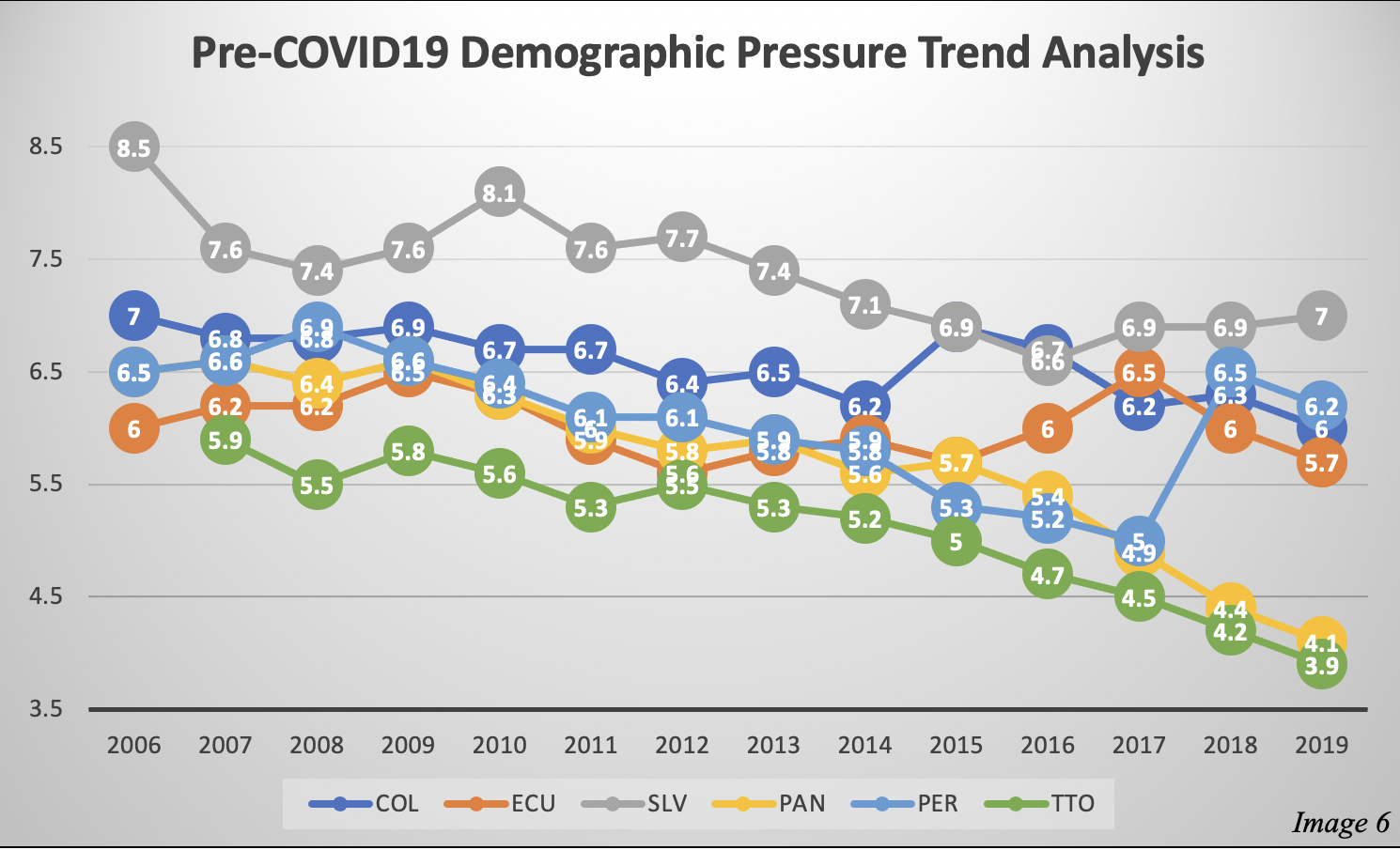 Regardless of one’s personal or political beliefs with regards to COVID19, the fact remains the majority of our target audiences perceive 1) China is responsible, 2) China failed to warn and prevent the spread of COVID19, 3) hospitals are unprepared, and 4) hold immense fear for their safety.

Thus, any efforts to educate vulnerable populations about threats they do not prioritize are unlikely to manifest in subsequent behavior change. A solution to this dilemma is to connect a valid priority of ours to one of theirs. For example, it would be feasible to publicly recognize the target audience’s valid human crisis concerns, as a preference to communicating how malign ESA activity and influence exacerbates their issues. Adopting a competitive approach to the People’s Republic of China, based on a clear-eyed assessment of the Chinese Community Party’s intentions and actions, is a crucial place to start, while consistently integrating rigorous D3M methods and tools. This holds the capacity to remedy human crisis issues through CA, while indirectly helping to support PSYOP in their messaging efforts to increase U.S.-PN civil, political, and military cooperation.

While these statistics solely serve as an initial baseline, directed sentiment analysis can be derived in a variety of ways such as social media scraping, content analysis, or a survey series. In time, it will be possible to detect new trends in a target audience to determine whether or not these perceived threats change and to what percent shifted priorities are correlated to U.S. activities to earn our place as a partner of choice.

Recognizing the potential for our own intrinsic biases to influence personal and/or collective beliefs and actions is essential to ensure effective decision-making.

With this statistical insight derived from recent surveys, we better understand 1) divergences of perceived threat and 2) a potential need to educate ourselves and target audiences across the AOR and why our priorities merit their attention. By understanding the data supporting our priorities, we gain their cooperation to help us counter emerging threats posed by a variety of threats including gangs, violent extremist organizations, and beyond.

Thus, the goal is not to diminish one’s perceived threats, but better understand the perspective to derive solutions in an effort to promote balance and security in the region for collective prosperity.

Dr. Jason Christensen is a Booz Allen Hamilton Social Scientist at U.S. Special Operations Command South. He earned a BA in Global Studies and a MS in Security Technologies from the University of Minnesota. By the age of 25 he also earned a PhD in Security Studies and a Graduate Certificate Degree in Intelligence and National Security from the University of Central Florida. His current research interests include state fragility and counterterrorism.

I would like to acknowledge the SOCSOUTH J39 Team, Danae Bowen, and MAJ Chris Telley for their contributions to this research. My sincerest gratitude to our survey platforms who equip us with remarkable, credible insight in real time in some of the most remote and hostile corners of the AOR. Finally, the views expressed are mine alone as the sole author of this paper and do not necessarily reflect the official position of U.S. Special Operations Command South, Booz Allen Hamilton, and/or the Department of Defense.

[1] This is often referred to as the “false consensus effect”

Dr. Jason Christensen is a Booz Allen Hamilton Social Scientist at U.S. Special Operations Command South. He earned a BA in Global Studies and a MS in Security Technologies from the University of Minnesota. By the age of 25 he also earned a PhD in Security Studies and a Graduate Certificate Degree in Intelligence and National Security from the University of Central Florida. His current research interests include state fragility and counterterrorism.