We tend to think of (so-called) narco-submarines as a Latin American phenomenon. Properly speaking they are LPVs (Low Profile Vessels); alternatively SPSS (Self-Propelled Semi-Submersible—I do not use this term). Locally in Latin America they are known as ‘narcosubmarinos’ or ‘semisumergibles.’ Now we have another Spanish name to add to the list, ‘planeadora fantasma,’ meaning ‘Ghost Glider.’ This is because narco-submarines are not confined to the Americas. Similar methods being used elsewhere, most noticeably in Spain.

The most widely reported Spanish narco-submarine (and I use this colloquial term unapologetically), was found on 24 November 2019 on the Galician coast. The 72 feet long craft was large and carried over 3 tons of narcotics, but it was otherwise like the ones found in the Pacific or Caribbean. In contrast, the one found in the same area on 13 August 2006 was completely unique. And the same can be said of the latest 'Ghost Glider,' found on 27 August 2020. The basic difference is that the November 2019 boat was built in Latin America while the other two were built in Spain. Different ideas, conditions and modus operandi have led to different approaches in design. 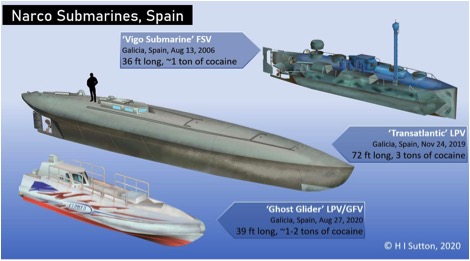 An elaborate artisan submarine was found abandoned off Spain's Galician coast near Vigo on 13 August 2006. This is about the time that narco-submarines, as we would recognize them today, were beginning to be interdicted in Latin America. It was a FSV (fully submersible vessel), 36ft (11 meters) long and 6.5ft (2 meters) across. And unlike LPVs, was able to fully submerge, down to a depth of about 10ft (3 meters). Underwater it was powered by batteries driving two electric motors. And it had over 1,000 gallons of fuel for surface running. It was estimated to be capable to carrying about 1 ton of cargo. Other aspects were also relatively advanced, including a folding snorkel mast and radar antenna.

Despite its sophistication there is no suggestion that this tiny craft was suitable for transatlantic voyages. More likely it was intended to rendezvous with another ship offshore, pick up the drugs and transport them back to the Spanish shore.

A regular LPV of the style we see in Latin America. There is compelling evidence that this was designed by the same master boat builder who is responsible for several others. Design details, such as a small splitter plate ahead of the cockpit windows and the V-shaped hull, create a ‘designer’s fingerprint’. This allows us to tie together multiple incidents.

The first LPV from this designer was interdicted by the Colombian Navy on 3 January 2019. Since then at least four more have been found, the most recent being found in its jungle boat yard on 6 August 2020. This last one was unusually large, being about 100 feet (30 meters) long. In fact all of the LPVs attributed to this unknown master boat builder stand out against their peers.

But we should not make too much of the particular designer. If the 2019 narco-submarine could cross the Atlantic, virtually any large LPV could. In overall terms it was not remarkable. This should be more alarming to Law Enforcement than if it was in some way special.

Current thinking, based on publicly available information, is that it was built in the Colombian jungle near the inland border with Brazil. It then sailed all the way down the Amazon to the coast before setting off across the Atlantic. It went via the Azores before heading towards Galicia.

This latest craft sits between the go-fast vessel (GFV) category and LPVs. Again, it is a unique design unlike those seen in Latin America. It takes a power boat hull, adds a hard RIB collar and then a built-up covered superstructure. It is not currently—based on public sources—possible to say how low it sat in the water. Possibly the collar was part of a ballast system. However we can say that it was intended to avoid detection, hence ‘ghost glider’. It was painted in a way that appears intended to deceive any observers.

The term ‘planeadora’ refers to a speed boat, and ‘planeadora fantasma’ has previously been used to describe the custom go-fast vessels also used off Spain. These craft are often RIBs and several have been specially modified for the task. Most famously the massive 59ft (18 m) seven engine ‘Monstruo’ stopped in 2009.

This latest vessel is about 39 ft (12 meters) long and could possibly carry a few tons of cocaine. The extensive grab rails and aft-sloping cargo hatch suggest that it is designed to be loaded at sea, which makes sense. So like the 2006 Vigo submarine, it is likely intended to meet other ships offshore and then bring the drugs ashore.

It could easy be put into the GFV category instead. But its elaborate construction and emphasis on deception (as opposed to raw speed) makes a strong case for it being a narco-submarine. It is certainly not just a typical GFV.

The Spanish narco-submarine traffic appears to be centered, on Galician drug gangs. This may be skewed by reported incidents, but all three have been discovered in Galicia in the North of Spain. Portugal, Ireland, France and the United Kingdom also appear to be logical landing points.

My suggestion is that the Cape Verde Islands and Azores are stopping off points for transatlantic narco-submarines. They likely meet supply vessels in the area. ACK 3, a Spanish company specializing in defense, intelligence and security consulting which advises European and Latin American military and law enforcement units suggests that language may be a factor. Brazilian crews can communicate with the local population on these islands using Portuguese.

Some of the transatlantic narco-subs may transship their cargo to other vessels along the way. Trawlers operating out of Spain seem the most obvious candidates. But I have not seen any information in the public domain to substantiate this theory. Another possibility is that the drugs are transferred to large cargo vessels heading to Northern Europe or even to North America. These vessels may be coming from a low-risk port so not be tainted in the way that a cargo ship crossing from Latin America might be.

So we can speculate that a Latin American built LPV could set off from Brazil (or Venezuela, Suriname or Guyana) and rendezvouses with a cargo ship off Cape Verde or the Azores. The cargo would be transshipped and the cargo vessel (or fishing vessel) heads north towards Europe. Off the Portuguese or Spanish coast, while still out at sea, it is met by a ‘ghost glider’ like the one seized in August 2020. The transshipping can occur at night, and the drugs are landed in a remote beach in Galicia. Local drugs gangs may only be able to control access to the landing point for a few hours. So some of the drugs may be dropped in pre-determined lurks awaiting retrieval by scuba divers at a later time.

It seems that it is now a case of when, rather than if, another transatlantic narco- submarine appears. And even if none are interdicted, it seems a sure bet that they are out there. And together with ‘ghost gliders’ and less exotic means, drugs trafficking organizations are still able to land their products on European shores.

The narco-submarine model for cocaine trafficking presents European law enforcement with a number of challenges. Detection, tracking and interdiction may all be different compared to the Pacific and Caribbean. And the vast expanse of ocean, often in harsh weather, may stretch existing patrol forces; however, SIGINT, UAVs and new satellite technology such as the Hawkeye 360 constellation may prove powerful tools.