Five years after the signing of the 2016 Peace Agreement between the Colombian government and the Revolutionary Armed Forces of Colombia (Fuerzas Armadas Revolucionarias de Colombia – FARC), an exclusive by the Wall Street Journal[1] revealed that the Biden administration will remove the organisation from the US list of foreign terrorist organisations. This move was deliberately intended to demonstrate US support for the agreement that in many respects is on the rocks, marked by slow implementation, failure to provide adequate security guarantees, and heightened assassinations of former FARC guerrillas, human rights defenders, and community leaders involved in promoting and implementing key provisions in the agreement—including illicit crop substitution.

With the 2016 peace agreement, approximately 13,000 former FARC guerrillas laid down arms, and the organisation itself—earlier this year renaming its party as Comunes[2]—transitioning into a formal political party and was granted 10 seats in the Colombian congress over two terms. While delisting FARC as a terrorist organisation would allow the US to fund programmes aimed at advancing the peace agreement if former FARC members were involved, it is also key in promoting the de-stigmatisation of former combatants more generally who have not only committed to the peace process but committed to reintegrating into Colombian society. 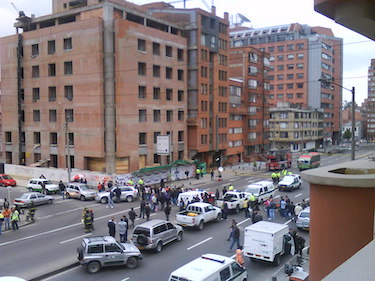 FARC was designated by the US as a terrorist organisation in 1997 during the Samper administration in Colombia, as FARC was reaching its height of power. However, after failed negotiations between the Pastrana administration and FARC between 1999–2002, during which the US also enacted its first “Plan Colombia” aid package, the Uribe administration conducted a deliberate communications strategy to reconceptualise FARC as a terrorist organisation after the legitimacy negotiations afforded the insurgency under the previous administration. This is not to say FARC did not engage in terrorist activities—the organisation engaged in bombings, assassinations, and kidnappings to list some of its tactics which is well-documented.[3] But Uribe’s Democratic Security framework[4] was a guiding policy designed to reassert control over the country by conducting an offensive against the country’s guerrillas to reassert control over the country specifically with US cooperation, while simultaneously conducting an outward facing campaign to deal with these organisations as “terrorists.”

I interviewed a former official under the Uribe administration in 2018, who explained that when Uribe decided to categorise FARC as a terrorist organisation, particularly after the 9/11 attacks, it enabled the government to utilise aid that was intended to be used against drug trafficking to also fight against the FARC. They said that “if the fight of the US is against terrorism, then there is a terrorist organisation in Colombia.”[5] The point here is that there is no denying that FARC engaged in terrorist tactics when it was an armed insurgency. But it is no surprise that there has been a political dimension to US aid provision which now, after the 2016 peace agreement, has practical implications for the implementation of post-conflict processes and programmes so long as the legacy of the terrorist definition remains.

Since formal FARC demobilisation in 2017, former FARC guerrillas face ongoing challenges in reintegrating back into Colombian society. I asked Tanja Nijmeijer, a former FARC guerrilla and member of the organisation from 2002, how the US designation has been impacting reintegration efforts and processes for former FARC members. She explained that for example, “all of the organisations that have been funded by US aid can’t hire ex-combatants” and that “demining organisations from ex-combatants are having a lot of problems with the US,” particularly in terms of the groups’ accreditation and formalisation of a demining organisation as it involved former FARC members. She explained that the US designation means that “no organisation financed by the US can have any relationship with ex-combatants, and in practice that has a lot of implications.”[6]

However, the designation goes beyond the practicalities of post-conflict processes to the stigmatisation of former FARC combatants who have laid down arms and actively involved in reintegration processes. Nijmeijer argued that its “terrifying how people adopt the word ‘terrorist’ from the US and don’t question the contents of the concept, and they just keep on maintaining that there shouldn’t be a podium for terrorists.” In this respect, there is an ongoing mentality that “there is no dialogue possible with people who still consider as terrorists and that leads to stigmatisation, also in Colombia. Because the whole idea around terrorism is that with terrorists you can’t engage in dialogue, because they are not worth being engaged in dialogue with.”

Despite full intentions to co-operate and engage in reintegration processes, security guarantees for ex-combatants appears to be a stubborn ongoing challenge. For example, a recent report by WOLA identifies that while the demobilisation process itself was highly successful, reintegration remains flawed but is slowly progressing, but requires the government to respond to a variety of needs such as housing, education, psychosocial support, basic income and importantly, security.[7] As the report identifies, to protect former FARC guerrillas, “the most effective way to stop them being killed is to increase the probability that the killers might be punished and brought to justice, along with early warning systems and other collective protection mechanisms. However, the changing conflict landscape in Colombia continues to exacerbate insecurities for not only former FARC members but also populations living throughout the country still experiencing conflict. After FARC’s demobilisation, the government is still struggling to fill territorial vacuums that continue to be vied over by armed groups and other smaller drug trafficking organisations, including FARC dissidents.

How FARC dissidents are different

However, a key point to note is that while many of these dissident fronts are indeed made up of former FARC members who decided not to lay down arms, or leave the reintegration process, a significant number of these individuals are in fact new recruits who have had no previous experience within FARC. Whereas many decided to leave to formal reintegration process and return to the battlefield, it has become evident that these groups are less ideological in their current form and prioritising control of vacated territory, consolidation and control over lucrative coca crops, and control of key trafficking routes. These groups have evolved to be strikingly different to original FARC that overwhelmingly committed to the peace process and former FARC guerrillas who are committed to reinsertion and reintegration processes.

Why this demonstrates a commitment to peace

The delisting of FARC comes at crucial time where the 2016 Peace Agreement between the Colombian government and FARC remains fragile. As noted, the US designation continues to have practical implications for its support of the peace process in Colombia where it continues to restrict the US from funding programmes that are aimed at advancing the accords, and that involved former FARC guerrillas- such as efforts to destroy land mines in which FARC has played a critical role. As the WOLA report identifies, “agencies, including USAID, still cannot support activities, like humanitarian demining, alternative development, or events within the framework of Territorially Focused Development Programs or PDETs (Programas de Desarrollo con Enfoque Territorial), if any collectively demobilised former FARC members are involved, even meeting with participants.”[10] Yet more than this, the designation of a formal, legal political party as a foreign terrorist organisation has implications for those who have stuck to the process and sought to reinsert into Colombian society in a life after FARC—many of which have transformed their lives by completing their education, creating small businesses, and cooperating with transitional justice mechanisms. The delisting of FARC as a foreign terrorist organisation would not only have positive effects on supporting a fragile peace agreement, including financially, but also playing a key role in the de-stigmatisation of former combatants who have committed to peace.

[3] For those interested, see the Global Terrorism Database (GTB) database for documented terrorist attacks by the FARC. National Consortium for the Study of Terrorism and Responses to Terrorism (START), https://www.start.umd.edu/gtd/.

This is useful information,…

This is useful information, but I need more, can you write more about it?
run 3