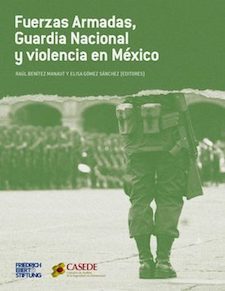 In Mexico, the armed forces are seen as privileged and autonomous institutions with political, legal, and public support throughout their history. The status quo of these militarized institutions remains unchanged and untouchable after the country experienced a democratic transition at the beginning of the 21st century. In developing countries like Mexico, with autonomous military institutions, they can bring more harm than good such as prolonging conflicts at the cost of civilians and jeopardizing the democracy of a country. Fuerzas Armadas, Guardia Nacional y Violencia en México (Armed Forces, National Guard, and Violence in Mexico), addresses the impacts of the abovementioned factors and the civil-military relationship during the 21st century. The book is edited by Raúl Benítez Manaut, a professor at UNAM (Universidad Nacional Autónoma de México) and President of the Colectivo de Análisis de la Seguridad con Democracia (CASEDE) and Elisa Gómez Sánchez, coordinator of Political Dialougue for the Friedrich Ebert Foundation in Mexico.  After an introduction by the editors, the text is divided into four main chapters each written by important Mexican researchers: Raúl Benítez Manaut, Alejandro Pocoroba García, Lisa Sánchez Ortega, and Raúl Zepeda Gil.

In the first chapter, Raúl Benítez Manaut analyzes the historical perception of the Mexican Armed Forces’ autonomy and the civil-military relationship during the 21st century. During the one-party rule era (1929-2000), the PRI (Partido Revolucionario Institucional or Institutional Revolutionary Party) established an autonomous vertical civil-military relationship with the armed forces that included privileges and exemptions unchanged during the democratic transition in 2000, abandoning the nationalistic doctrine and modernizing military structures. As cartel and military violence worsened after 2007, President Andrés Manuel López Obrador (AMLO) initially criticized the militarized role in public safety during his three previous presidential campaigns.  AMLO changed his position after winning the 2018 elections, dismantling the Policía Federal (Federal Police) and creating the Mexican Guardia Nacional (National Guard). The civil-military relationship is complicated despite Mexican military institutions having high public approval rates, civil society organizations (CSOs) criticize their management of the drug war, corruption, and impunity regarding human rights violations, and lack in strengthening CSOs. The arrest and release of former head of SEDENA (Secretaría de la Defensa Nacional or Secretariat of National Defense) Salvador Cienfuegos Zepeda by the DEA (Drug Enforcement Administration) in late 2020 highlight the nationalistic attitude of military institutions that denounce disrespect to their reputation to the public.[1]

Alejandro Pocoroba García, discusses the formation of the Mexican Guardia Nacional  in the second chapter.  This chapter is divided into four components. First, the institution’s origins can be traced back to the Mexican American War as an auxiliary force composed of armed citizens through mandatory service to defend federalist interests and from foreign invasion. However, its influence began diminishing throughout the 20th century with the incorporation of permanent military cadres from other armed force institutions. Second, AMLO reestablished the institution in 2019 as part of his strategy of fighting organized crime and participating in non-security civilian tasks, in which the author emphasizes the National Guard as a civilian de jure and a militarized de facto institution. Third, international organizations such as Amnesty International and the UN High Commissioner on Human Rights expressed concern over the possible deterioration of human rights, while civil associations like México Unido Contra la Delincuencia (Mexico United against Crime) questioned AMLO's security strategy, which could worsen the violence. Lastly, he reflects that the National Guard will gain influence during the following years in public safety and the president's justification for the institution's creation because of corrupt police institutions.

Lisa María Sánchez Ortega analyzes the militarization of public safety from the legal viewpoint in the third chapter. She opens up the debate on the use of militarization, its effects within the scopes of public safety and politics, and the different results it can yield depending on the duration, force, and circumstances of operations. She then reviews militarization during the second half of the 20th century, when the antidrug tasks were handled by the extinct PGR (Procuraduría General de la República or Attorney General of the Republic), and civil authority took care of eradication efforts, but military interference began increasing especially following US pressure which led to mass eradication, seizures, and detentions. During the administrations of Ernesto Zedillo (1994-2000) and Vicente Fox (2000-2006), the former increased interdiction efforts, capture of kingpins, and the creation of new law enforcement institutions while the latter carried out an operation to take down drug traffickers and enacting a law that legitimized the military's influence at times of peace. On the other hand, Sánchez Ortega demonstrates that the militarization during the Calderón (2006-2012) and Peña Nieto (2012-2018) administrations did not only not stop violence, drug trafficking, nor brought peace, but the armed forces have been benefited from legal frameworks that legitimize their conduct even if accused of human rights violations. The current AMLO administration’s negative perception of civil authority institutions have made fully militarized federal forces in charge of public security with a legal framework that attributes them to conduct police work and non-security tasks without requiring their separation from other military institutions and ignoring the criteria from the country's supreme court or the Inter-American Court on Human Rights.

In the final chapter, Raúl Zepeda Gil analyzes the social, judicial, and political bases of Mexico’s armed conflict, the toll that has taken on the human rights of Mexican civilians, and the alternatives to provide the right public policy solutions to the country’s security problems. He discusses the consequences of the “global prohibition regime” on the Mexican social base and the punitive philosophy of criminal populist conservatism, the deterioration of the judicial system, budgetary privileges to military agencies, and modifications to the modus operandi and structures of organized crime groups to confront military corps. He then describes the typologies of crimes and human rights violations that civilians fall victims to at the hands of organized crime and armed forces, such as homicides, extrajudicial executions, and forced disappearances. Lastly, the author takes a holistic approach in solving Mexico’s armed conflict by going over pacification and conflict resolution, significant judicial reforms, demilitarization of public safety, eliminating punitive approaches, discrimination, impunity, and most importantly, strengthening CSOs. He expresses optimism that Mexico would eventually advocate against the policies of the global prohibition regime and become a regional and international leader in the development of new mechanisms of a pacification agenda.

The book is divided into two components: the first two chapters analyze the history, civil-military relationship, and the rise of the National Guard, while the last two chapters study in detail the democratic consequences that the militarization of security institutions has on public safety, the citizenry, and Mexico itself. The four chapters highlight the flaws of the current AMLO administration of giving too many privileges to military institutions, and in fact, they represent no short-, medium-, or long-term solutions to the president's security strategy. It would have been valuable if the book compared Mexico’s case to other developing countries with fragile democracies, hybrid, or authoritarian regimes.  Such a comparative analysis would have given the reader a better understanding of the dangers that excess militarization poses to democracies, as well as the impact of corruption on military institutions and its correlation with the influence of cartels and human rights violations.

Fuerzas Armadas, Guardia Nacional y violencia en México would be valuable to scholars, lawmakers, CSOs, activists, law enforcement officials, and researchers who wish to understand how the Mexican government’s strategy to militarize public safety has never worked during the last three sexenios (administrations) and to create awareness of the dangers of excess militarization in public safety. The text’s final chapter proposes policy solutions that should be holistic within the political, economic, social, and legal contexts. These policies could work for Mexico and likely for other Latin American countries.

Pedro Izquierdo is a graduate student at George Mason University pursuing a master's of Public Policy with a focus on terrorism, transnational crime, and corruption. He earned his BA in International Studies with a minor in Spanish at Adelphi University where he attended the 2017 National Conference on Undergraduate Researchers and gave a presentation on Enrique Peña Nieto's failed anti-corruption policies. He is fluent in Spanish and English and his areas of interest are corruption, Latin American affairs, organized crime, drug trafficking, financial crimes, regional security challenges, and illicit trade.