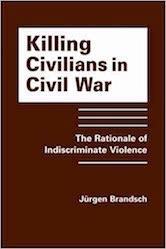 Killing civilians in war is a lightning rod for controversy.  Ethical, moral, and practical concerns frame the discussion—and more importantly the reality on the ground.  International law is clear, under International Humanitarian Law (IHL), the deliberate killing of civilians and other persons hors de combat is prohibited—that is it is a war crime.  Specifically, civilians are protected under IHL.[1]  Despite these norms, deliberate and indiscriminate killing of civilians persists.  Hugo Slim observed that despite widespread condemnation of deliberate targeting and suffering massacres—as well as rape, displacement, famine and disease—are often by design.[2]  What then is the logic of deliberately targeting civilians in war?  And what is that logic, in the case of Brandsch’s inquiry, in civil war?

Jürgen Brandsch, head of the Project on Small Arms and Light Weapons Control at the Bonn International Center for Conversion (BICC) seeks to answer why—despite conventional wisdom suggesting that targeting civilians in civil war makes little strategic sense—indiscriminate violence continues.  Killing Civilians in Civil War is an important work.  It provides an in-depth look at the logic of ‘indiscriminate’ targeting of civilians in civil war.  As a consequence, he finds that despite moral approbation, many actors (both state and non-state actors) find that targeting civilians is at times a rational choice that yields positive results for the perpetrator of the atrocity.  This controversial proposition is worthy of study—especially if we seek to understand the dynamics of these atrocities and ultimately prevent them.

In order to further that understanding, Brandsch, who received his doctorate from The University of St. Andrews, takes a deep dive into the targeting of civilians in civil war—and tangentially in insurgency and terrorism.  His inquiry is comprehensive, rich with data, and at times is likely dense for the lay reader.  His inquiry, published in association with the Handa Centre for the Study of Terrorism and Political Violence at St. Andrews, is well organized.  After an introduction, it contains three major sections: Part 1: What Do We Know About Indiscriminate Violence; Part 2: How Does Indiscriminate Violence Work in Practice? and Part 3: Conclusion.

Brandsch’s introduction sets the stage by examining a German Wehrmacht reprisal against Ukrainian partisans in Baranivka, Ukraine on November 1941 (pp. 1-3).  In response to two German officers, and one soldier killed, harsh reprisal was employed, killing 10 male inhabitants, that were selected at random, and then killing them by firing squad.  This type incident is more common than we like to admit.  Did it work for the Wehrmacht and suppress opposition or was it counter-productive enhancing resistance?  These questions are as relevant now as they were ten.  Collective punishment—that is punitive targeting of civilians-- were seen in Turkish attacks against Kurds, by Russian security forces in Chechnya (p. 2), by the French in the Algerian Civil War (1954-1962),[3] and in contemporary conflicts including Syria[4] and Mozambique’s Cabo Delgado.[5]

The literature of indiscriminate violence is a puzzle; (p. 2) it largely suggests that such attacks are ineffective, counter-productive, or increase resistance or opposition support (pp. 2-3).  Other studies take an opposite view and suggest that ‘indiscriminate’ violence may in fact be an effective—albeit ethically and normatively challenged—tool for suppressing insurgency by coercing civilians and breaking civilian support for rebels (p. 2).  Little consensus on operational utility of civilian exists.  Brandsch suggests that both counterproductive and coercive effects are possible.  These can be complex and exist together, at various points of time, requiring assessments of relative benefit.  In addition, the target of the violence may not be the target for coercion—the perpetrators may seek to influence other groups or actors with the ‘targeted’ violence.  To address these potentials, Brandsch disaggregates the various factors involved in targeting disparate target sets or as the author states: defining and determining “the effects of strategic indiscriminate violence against civilians in civil wars” (pp. 4-5).

To bring clarity to the use of violence, Brandsch parses the definitions of ‘indiscriminate’ violence to define targeting based on individual action (behavior) as ‘selective violence,’ violence targeting groups (villages, tribes or ethic groups) based on group action (group-behavior) as ‘group-selective violence,’ and violence with out a targeting rule or perceivable pattern as ‘arbitrary violence’ (p. 5).  This disaggregation allows assessment of the effects of the (indiscriminate) violence by actor, audience, i.e., the population, as defined as constituencies, a groups or groups within a target universe, and non-participating observers (p. 9).

The Ontology of Indiscriminate Violence

“Part 1: What Do We Know About Indiscriminate Violence” reviews existing theories of government use of indiscriminate violence (Chapter 2) and nongovernmental indiscriminate violence (Chapter 3).  This review is systematic and rigorous and provides insights into the ‘positive’ (beneficial for the attacker) and ‘negative’ (counterproductive for the attacker) potentials of employing violence against civilian targets.  Obstacles for achieving this understanding are addressed in Chapter 4, which also examines coercive strategies and their utility. Chapter 5 presents Brandsch’s ‘Theory of Group-Selective Violence.’  His theory is based on rational choice and identifies two types of ‘group-selective’ targeting.  The first involves the attacker targeting a ‘specific’ group to achieve coercion or ‘specific group-selective violence.'  The second type involves the targeting of a group to coerce another (or other groups) yielding ‘general group-specific violence.’

The Mechanisms of Indiscriminate Violence

“Part 2: How Does Indiscriminate Violence Work in Practice?” examines the effects of indiscriminate violence.  This examination relies on an extensive review of the literature, historical case studies, and detailed empirical investigation.  These chapters (Chapters 6-8) focus on the use of ‘general group-selective violence’ in order to assess their potential strategic effectiveness.  Chapter 6 reviews empirical findings on indiscriminate violence.  Chapter 7, “Group-Selective Violence Across History” looks at historical case studies of civilian targeting despite customary normative restrictions and moral objections.  This is easily the most accessible chapter for practitioners and readers without training in the social sciences.  Sieges (pp. 150-152), colonial enforcement actions employing violence directed against tribes and ethnic groups (pp. 153-60), including actions in French Algeria (Algérie française),[6] targeting villages in counterinsurgency (pp.160-166), and targeting families (pp. 166-167). Chapter 8 looks at violence directed against civilians in ethnic wars and provides evidence of detailed empirical tests (with rich quantitative data and analysis). The chapter assesses that when multiple ethnic groups are present in a state experiencing ethic civil war that the government may resort to group-selective violence to deter other groups from entering the conflict (pp. 173, 195).

The concluding chapter (Chapter 9) summarizes the text and the theories assessed and developed in Brandsch’s study as well as its findings.  Dr. Brandsch concludes—with several caveats and limitations—that ‘group-selective violence’ can indeed confer operational advantages to the attacker.  The conclusion also adds useful discussion on terrorism and ‘group-selective’ targeting (pp. 202-204).  The conclusion also reinforces the importance of recognizing the ethical implications of studying indiscriminate violence and the ethical implications of employing policies that embrace indiscriminate violence, as well as the use of deliberate targeting itself  (pp. 205-207).

The text includes five tables and 17 figures (all indexed in a separate list), as well as two appendices with four and five tables respectively, a glossary, a comprehensive bibliography (grist for a master class on the topic itself), and an index.  Throughout the text there is a rigorous attention to detail and ample description of the hypotheses assessed and their underlying datasets and methodology employed.  Together the text makes a significant and important contribution to the literature.  The text is aimed a researchers, but also provides promising insights for intelligence analysts and commanders seeking to understanding adversaries that choose to violate IHL norms and attack civilians. Such understanding is necessary to frame the policies and diplomatic initiatives needed to instantiate the prohibition against deliberately targeting civilians and maintaining distinction in armed conflict—especially non-international armed conflicts and civil wars.[7]

[1] See Customary IHL Rule 89.  State practice establishes Rule 89. Violence to Life as a norm of customary international law applicable in both International and non-international armed conflicts.  State Practice Relating to Rule 89. Violence to Life includes treaties, such as the Hague Regulations (1899, 1907,) The IMT Charter (Nuremberg), Geneva Conventions (1949), Article 7(1)(a) of the ICC Statute (1998); the Lieber Code (1863), numerous other instruments, and state practice.

[7] See “Principle of Distinction.” ICRC Online Casebook: How Does Law Protect in War? 2020.