Criminal cartels and Transnational Criminal Organizations (TCOs) rely on corruption to enable their pursuit of criminal profit and power. Indeed, Mexico’s cartels emerged from the seeds of corrupt police profiting from the narcotics trade.[1]  While violence is the public face of criminal cartels and transnational gangs, corruption is the core threat to public trust and state legitimacy and capacity.  Public corruption, including bribery, abuse of power, and collusion of police, judicial and public officials with criminal enterprises allows those enterprises to elude detection and avoid state interference.  Corporate corruption, as seen in commercial enterprises like PEMEX (Petroleos Mexicanos) and banks, allows access to resources and financial flows that foster money laundering.  Extortion and blackmail, as well as influence peddling are also involved.  Corruption enables the narcotics trade, human trafficking, migrant smuggling, arms trafficking, and resource exploitation, including fuel theft, the production of counterfeit goods, and wildlife crimes. This essay considers cross-border cartel corruption potentials in the United States. 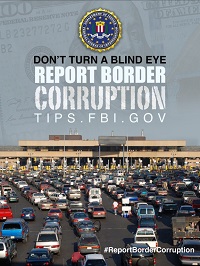 Corruption plays a pivotal role in the emergence and evolution of criminal cartels. It also fuels violence and influences targeting choices.  Corruption enables cartel power by providing avenues for impunity.  Corrupt police, judges, and public officials facilitate cartel transactions with networks of co-opted public officials helping cartels and their affiliated gangs avoid detection, interdiction, and criminal sanction should they be caught.[2]  This influence has a long legacy in Mexico where the current cartel framework descended from the plazas established by Miguel Ángel Félix Gallardo, a corrupt Mexican Federal Judicial Police official.[3] Félix Gallardo was behind the torture/murder of DEA Agent Enrique ‘Kiki’ Camarena.  He was also closely integrated with the then-ruling Partido Revolucionario Institucional (PRI).[4]

Collusion between the government at all levels (federal, state, and municipal) benefits the cartels by challenging the state.  Corrupt criminal-state networks (narcopolitca) can effectively supplant the state to exercise territorial control and economic power.  In addition, economic hegemony allows the cartels to penetrate legitimate businesses and purchase political power.  The resulting corrosive influence erodes the legitimacy of the state.[5]  Cartels effectively make a strategic investment in corruption: co-opting public officials and weaponizing graft.

Corruption reaches the highest levels of the Mexican government.  Consider the case of Genaro García Luna, Mexico’s former Secretary of Public Security from 2006-2012 who was indicted in the Eastern District of New York for conspiracy.  He allegedly took bribes from the Sinaloa cartel providing sensitive law enforcement information to the cartel and safe passage for their drug shipments in return for bribes.[6]  García Luna’s case illustrates the depth of cartel penetration into the Mexican state, with corruption and collusion reaching its highest levels.[7]

In Honduras, corruption also reached the apex of the state with President Juan Hernández and ex-President Pepe Lobo implicated as co-conspirators in a case against Hernádez’s brother, a Honduran politician.  The money laundering and drug trafficking alleged in the case was leveraged to ensure the co-conspirators’ political power.[8]  These incidents illustrate the potential emergence of a narco-state. In El Salvador a large segment of the population (42% of survey respondents) believed gangs, rather than the government, ruled. The major gangs in El Salvador (and the rest of the Northern Triangle of Central America) are the maras: Mara Salvatrucha (MS-13) and 18th Street (Barrio 18) both with roots in Los Angeles and a presence across the US.[9]

The process of cartel penetration into the state is often described as one of ¿Plato o Plomo? (Silver or Lead) meaning take the bribe or suffer death for yourself or your family.  That certainly is part of the equation but the corrosive roots of corruption are deeper and exploit the interpenetration of crime and politics.  Both exploit raw power for economic gain, enhancing personal or organizational reach.  Corruption plays a role in state transition through a process of ‘criminal insurgency’ where the combined forces of corruption and violence erode state legitimacy.  Together with weak state capacity, criminal enclaves where cartels and gangs (territorial gangs) effectively rule and exert a near-monopoly on violence reconfigure the state through a process of co-opted state reconfiguration (CStR).[10] A lack of public confidence in the state erodes state legitimacy.  When combined with a lack of state capacity to contain violence, insecurity, and limit impunity the result is diminished state solvency.[11]

The main areas of concern for cartel-related corruption in the United States are the US-Mexico border region (including border cities, especially the twin plazas such as San Diego-Tijuana, El Paso-Ciudad Juárez, the various hub cities used to distribute narcotics by Mexican criminal cartels and other transnational TCOs, and state and federal prisons and local jails where cartel prisoners can gain access to and corrupt corrections officials (and recruit prisoners and other gangs into their enterprises). This border region can be described as a ‘hyperborder’ due to its complexity, bi-directional connectivity and  ‘inter-penetration’ of criminal enterprises.[12]   Key distribution hubs include, San Diego, Los Angeles, Houston, Phoenix, Dallas, New Orleans, Atlanta, and Chicago.  Prison gangs like Barrio Azteca, Tango Blast, Nuestra Familia, and Eme (Mexican Mafia) are cartel allies and have the potential to serve as vehicles for cartel penetration of prison systems (and corrupt prison officials.  Prisons provide cartels access to street gangs (like MS-13), outlaw motorcycle gangs, and other organized crime groups (which also have the potential to corrupt prison and law enforcement officials). Prisons and jails provide an avenue for gangs to project their power and criminal influence out to the streets (by violently enforcing fealty of gang members in custody).

Border corruption, especially along the Southwest Border (SWB) is a major concern. Customs and Border Protection (CBP) officer have been identified in many types of misconduct including arms trafficking (including straw purchases of weapons trafficked south to Mexico) and taking bribes to avoid enforcement action.[13]  Instances of cartel recruitment of CBP agents, including grooming agents prior to their being hired have been reported.[14]  In 2015, a Border patrol agent in South Texas was charged with capital murder for his role in a Cártel del Golfo (CDG or Gulf Cartel) murder involving beheading the victim. Luna was acquitted of murder but found guilty of corruption. His brother an alleged CDG sicario or hit man was convicted of capital murder.[15]  The arrest rate of CBP officers and Border Patrol agents rose steeply (11%) between FY 2017 and 2018 including seven incidents of corruption.  While only a small number of CBP/Border Patrol personnel are involved in this misconduct, the rate of misconduct is five times that of other law enforcement agencies.[16]

Corruption is also a concern in the Rio Grande Valley of Texas. Consider the case of Jonathan Treviño, commander of a police narcotics unit who stole drug money and escorted drug shipments for pay.  He was convicted for his corrupt acts, as was his father the Hidalgo County Sheriff Lupe Treviño who was convicted of taking campaign contribution from a drug trafficker affiliated with the Gulf Cartel.[17]  South Texas is a known hub of corruption—some related to the cross-border drug trade, some not.[18]

In Chicago, police and public corruption is deeply rooted.[19]  Corrupt police have been convicted for accepting bribes and kickbacks, but more importantly social network analysis of police misconduct demonstrated how corruption could spread like a disease compromising police integrity.[20]  In Southern California, several cities in the LA Basin have been riddled by corruption. These include Bell, where city officials (both elected and appointed) were convicted on graft and corruption charges, including misusing public funds. The mayor of Cudahy, a nearby city accepted bribes from a marijuana dispensary.  Public officials in nearby South Gate, and Vernon have also been netted in corruption cases. Corruption not only erodes public trust but cost taxpayers money and deprives them of public services.[21]  While the nexus with organized crime in these cases is undefined; the corrupt patterns provide the foundation necessary for corrupt linkages to flourish.

Corruption—for both the police and public officials—is usually a sporadic issue, contained by active oversight and internal investigations.  When oversight and transparency is absent corruption can gain a foothold.  The narcotics trade and other organized crime activities like vice and human trafficking are ripe for exploitation.  The large sums of money involved tempt some public officials and police.  Good community relations and high degrees of public trust limit the opportunities for corruption.  When the police actively protect their community and perceptions of police and political legitimacy are high, corruption is easily contained.  When corruption erodes those public bonds of trust, criminal enterprises can insert themselves into the government mix.  Criminal cartels and gangs often do so by design; they exploit familial relationships and identity, such as the bonds found when people come from the same neighborhood or town.

Gangs and cartels seek to penetrate and/or infiltrate the police and other law enforcement agencies, the courts, and corrections.  They do so by seeking to corrupt officials and at times insert their own recruits into the hiring process to achieve long-term access.   They use both sworn law enforcement officer (LEOs) and non-sworn secretaries and clerks (who often have deep access into criminal records systems).  In addition to penetration, cartels and gangs bribe police LEOs and public officials.  As in Mexico, this corrosive interaction is often more pronounced at local levels—municipalities and counties.

Corruption provides opportunities. It provides opportunities for gangsters and corrupt public officials, as well as corporate officers with fiduciary responsibility to gain power, influence, and profit.  It also provides these actors to operate with impunity protecting their enterprises and their corrosive assault on the state and public trust. Is corruption entrenched in the US?  The answer is likely no.  The drug cartels and other organized crime groups have exploited endemic corruption potentials to further their goals but the transparency and professionalism of most police and law enforcement agencies have kept them from getting a deep foothold.  Nevertheless, corruption has been a recurrent problem for American law enforcement, especially regarding the narcotics trade since the landmark Knapp Commission in New York City (1970).[22]

Detecting corruption and insulating government agencies and corporations from corruption requires concerted oversight.  Internal audits and inspections and monitoring public complaints can provide indicators of corrupt action; so can decreases in public trust.  Increases or decreases in enforcement activity, or shifting enforcement activity in favor of one cartel or gang at the expense of another may also potentially signal corruption. Excess financial gain, erratic campaign contributions, and/or unexplained income among public officials and LEOs can also be an indicator; in prison setting increases in smuggling phones and contraband into the facilities may also signal potential corruption.  In all cases multi-lateral task forces lime the FBI’s Border Corruption Task Forces can also yield intelligence about corrupt activity.[23]   Effective public corruption investigations, using both state and Federal statutes can limit the convergence of TCOs with local gangs providing potential barriers to the erosion of public trust.

[7] Jeremy Kryt, “Why the Drug War Can’t Be Won—Cartel Corruption Goes All the Way to the Top.” The Daily Beast. 14 December 2019, https://www.thedailybeast.com/the-drug-war-cant-be-won-because-cartel-corruption-goes-all-the-way-to-the-top

[18] Alan Greenblatt, “Why is Public Corruption So Common in South Texas?” Governing. May 2016, https://www.governing.com/topics/politics/gov-public-corruption-crystal-city-texas.html.