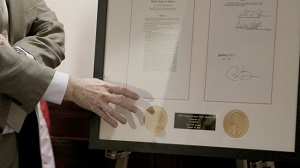 The Medal was prominently draped under a silky red cloth, in the most appropriate location in the Headquarters, the Donovan Room.

Maj. Gen. William Donovan was the first director of the Office of Strategic Services, the precursor to today's Central Intelligence Agency and modern day U.S. Special Forces. In this room, retired Lt. Gen. Charles Cleveland, former USASOC commander and member of the OSS Society, presented the medal to USASOC for its contribution to the OSS.

"Congressional Gold Medals are the highest civilian honor Congress can bestow. Congressional rules require that two-thirds of the House of Representatives and U.S. Senate, respectively, must cosponsor the legislation," remarked President of The OSS Society, Charles Pinck.

The medal acknowledges and recognizes OSS members' contributions to the security of the Nation during World War II. What makes a Congressional Gold Medal unique is each medal is specific to the recipient.

On the front of this medal, the inscription reads "OSS" and reveals three figures -- a woman, a paratrooper, and a man in a suit -- representing the broad range of work undertaken by the OSS. Each of the figures devoid of detail, highlighting the way OSS agents carried out their duties.

The figures also reflect the diversity in the OSS, as its almost 13,000 members were gathered from all branches of the military and civilian personnel. The opposite side of the medal reveals the OSS spear and code words used by former OSS agents. 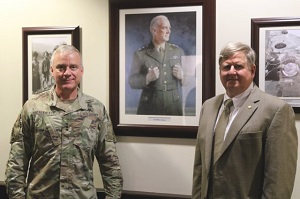 The OSS mission required extraordinary actions and attitudes from the men and women, which were tasked to carry the burden of mission successes. One of the lasting results of their courage and perseverance is Special Operations Forces.

How does SOF trace their lineage back to the days of the OSS? "The OSS Operational Groups and Jedburghs were the World War II predecessors to U.S. Special Forces. Both elements are recognized on the OSS Congressional Gold Medal. TEAM HUGH was the first Jedburgh team to jump into France on June 5, 1944, the day before D-Day. UNION I and II were Jedburgh missions to the Haute-Savoie region of France. PEEDEE was an Italian Operational Group. Its mission marked the only time during World War II the Germans surrendered a major city (Genoa) to irregular forces," answered Pinck.

The OSS Jedburgh teams organized, trained, and fought with resistance groups in Europe and Asia, playing an important role in America's ultimate victory; World War II. Current SOF maintains this mission set along with others, while applying innovation and a modern twist. The value of organizing, training, and fighting alongside our partners remains a time honored tradition.