Peace Talks with Taliban Are 'Dead'

Peace Talks with Taliban Are 'Dead' 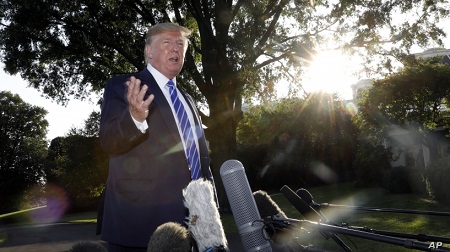 "I took my own advice," Trump told reporters Monday. "We had a meeting scheduled. It was my idea, and it was my idea to terminate it. I didn't discuss it with anybody else."

The Taliban, according to Trump, "are telling people they made a big mistake" by carrying out an attack last Thursday in Kabul that killed a U.S. Army soldier and 11 other people.

As a result, "as far as I'm concerned, they're dead," Trump said of the discussions with the militants in Afghanistan.

The president also stated that U.S. forces have "hit the Taliban harder in the last four days than they've been in over 10 years."

A White House meeting with the Taliban would have been "a step too far," said Trump, adding that he thought "Camp David would be good, and I still do."

U.S. involvement in Afghanistan is the longest war in U.S. history. It was started with U.S. military efforts to wipe out al-Qaida terrorist training grounds protected by the Taliban that were used to launch the 2001 terrorist attacks on the U.S. The 18th anniversary of the 9/11 attack is Wednesday.

The Taliban say American troops "will suffer more than anyone else" with Trump's abrupt cancellation of the peace talks.

The move to call off the talks is "a major blow to the peace process on the whole," according to Michael Kugelman, the Wilson Center's senior associate for South Asia. "But at the end of the day, President Trump wants out of Afghanistan. He's made no secret of that. And his best way to get out of Afghanistan is to get a deal with the Taliban."

Kugelman tells VOA that it plays much better politically for Trump to leave Afghanistan with some type of deal than with no deal at all.

"You'll have detractors, even supporters, essentially say that he's basically going to surrender, and he doesn't want that, especially as the U.S. presidential election gets closer,"  Kugelman explained.

"We've been policeman there for a long time, and the government there is going to have to take responsibility" for its own security, Trump added on Monday. "We'd like to get out, but we'll get out at the right time."

Republican and Democratic lawmakers are criticizing Trump for his plan to invite the Taliban to Camp David — for decades the scene of high-level talks between U.S. and foreign leaders.

Republican Congresswoman Liz Cheney, daughter of former Vice President Dick Cheney, who was in office at the time of the 2001 terrorist attack, said, "Camp David is where America's leaders met to plan our response after al-Qaida, supported by the Taliban, killed 3,000 Americans on 9/11. No member of the Taliban should set foot there. Ever."

Sen. Bob Menendez, ranking Democrat on the Foreign Relations Committee, said of the meeting, "It's another example of the Trump administration's foreign policy, which is a high-wire act that ultimately is focused on Trump as a persona, but not in the strategic, methodical effort of creating peace."

Republican Congressman Adam Kinzinger, an Air Force pilot who served in Iraq and Afghanistan before winning a seat in the House of Representatives, said on Twitter, "Never should leaders of a terrorist organization that hasn't renounced 9/11 and continue in evil be allowed in our great country. NEVER. Full stop."

Negotiators for the U.S. and the Taliban have held nearly a year of peace talks.

Before he was ordered to return home from the region, U.S. chief negotiator Zalmay Khalilzad said his team of negotiators had drawn up a draft framework agreement that, if approved by Trump, would allow 5,000 American troops to leave five military bases in the country within 135 days.

"We have a very specific number," but he was not going to publicly reveal it at this time, Trump told reporters on the White House South Lawn before boarding the Marine One helicopter.

"Our way is clear. We have chosen sustainable and dignified peace, and we will not go back," he said. "Negotiations [with the Taliban] are impossible without a cease-fire."

Abdullah Abdullah, Afghanistan's chief executive officer, blames the Taliban for the deadlock in the peace process and says because of them, the opportunity for the restoration of peace has been lost.

"Unfortunately, today we are as far away from peace as we were in past years," he said.