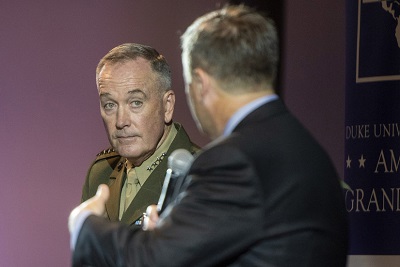 DURHAM, N.C. -- The chairman of the Joint Chiefs of Staff laid out the process for military support to the U.S. Department of Homeland Security during a discussion with students in Duke University’s Program in American Grand Strategy Monday.

The chairman spoke of the process solely from a military perspective. The Department of Homeland Security’s Customs and Border Protection agency have the mission of securing the borders. DHS officials have said that they are worried that caravans of Central American asylum-seekers pushing up from the south may overwhelm CBP personnel. DOD was tasked to provide logistical and medical support.

Homeland Security told DOD in writing what capabilities they needed, Dunford said. DOD officials studied the request and proposed what is being deployed now. This includes logistical support, specifically to harden points of entry.

“There are soldiers on the border putting up concertina wire and reinforcing the points of entry,” the chairman said.

DOD personnel are also helping with movement and providing trucks and helicopters. DOD is also providing some medical support.

“There is no plan for U.S. military forces to be involved in the actual mission of denying people entry into the United States,” Dunford said. “There is no plan for soldiers to come in contact with immigrants or reinforce the Department of Homeland Security as they are conducting their mission. We are providing enabling capabilities.”

The military is following an order from President Donald J. Trump to support the Department of Homeland Security, the chairman said.

From a military standpoint, he said, he asked a number of questions. The first was, “Do we have unambiguous directions on what the soldiers … have to do?”

The answer is yes, Dunford said, and what’s more, the soldiers understand what is expected of them.

“Number 2: ‘Is this legal?’ And the answer is, yes,” Dunford said. “And three, do they have the capability, the wherewithal to perform the task we’ve asked them to accomplish?”

The service members on the border “know exactly what they are doing, they know why they are doing it and they have the proper training and equipment to do it,” he said.