Gen Vol Warner died last week. He was the epitome of what a Leader is all about and a major factor in my own development.

I first met Vol Warner on a Ranger 25-mile road march. Not the sort of venue one expects to find a Brigadier General. The road march and the General forever cemented in my mind, how leaders lead by following. He set my life standards of what professionalism and soldiering truly mean.

It was August 1974 at Ft Stewart, Georgia and the day was as heated and soporific as ever experienced. He joined us to inspect and assess the qualities of the newly formed Ranger battalion. I was tasked by the battalion commander, KC Leuer to be his escort/aide during his visit. Gen Warner arrived shortly after 0430 and I briefed him on the plan-a 25-mile full ruck road march by the entire battalion. I handed him a full ruck and off we went. It was expectedly enervating, mind numbing and physically exhausting. Gen Warner simply kept on trudging and made light conversation as we wound our way through all the sandy roads and trails that abound at Stewart.

Prior, in some haste, I packed a Vietnam era Chili LRRP (Long Range Ration Patrol) as my “emergency” ration-light, yet filling in a very glutinagenous manner. Just before we started, I poured water inside to start the reconstitution and put it in my ruck. Around Mile 12, we halted for a 15-minute break. I pulled out the LRRP and offered it to the general with a C ration spoon. He dipped into it and ate some and handed it back to me. I ate some, licked the spoon and put it in my pocket and wrapped the remainder, this time putting it in my pants cargo pocket. Vol rucked up and we moved out on what I know was a painful experience for him with no prior road marches on the Capstone program.

At Mile 25, toward the end of the day, we finally halted and prepared to return to barracks. The General and I sat on the edge of a ditch dripping in sweat and dust. Our faces streaked with rivulets and our fatigues soaked through. I pulled out the LRRP and spoon and offered it to him. He took it and ate half the remaining contents and passed it back to me. I consumed the rest.

I had not met any generals before on a close, near personal basis, but he set my model for all others. Over my career, we crossed paths many times and I made it a point to seek him out for counseling and conversation. As he progressed to full general, he never changed his demeanor or his soldier values. Any man who would go on a 25-mile road march and happily share a chili LRRP would never disappoint in his leadership.

Vol Warner never disappointed and set the soldier lodestone for me. Others might, but I could over look their transgressions-after all, they had never been on a road march and shared a chili LRRP. 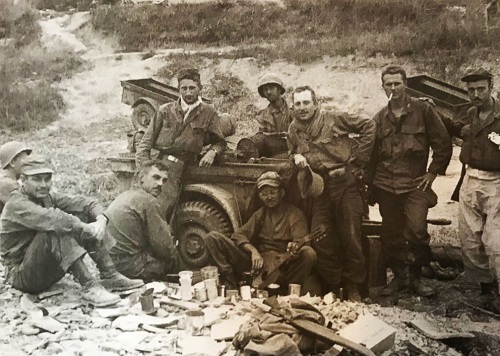 2Lt Vol Warner is second from right. A true Grunt