In 2020, the very mention of the F-14 in the United States gives off a nostalgic vibe, likely spurring up memories of the jet being featured in the 80’s hit, Top Gun. In Iran, however, there is a starkly different reality for the F-14 where a dwindling fleet continues air defense roles over 40 years after their delivery. Anyone could ask in disbelief, who uses a 40 year old fighter jet?

This image of an obsolete Iranian Air Force (IRIAF) is routinely supported by Iranian domestic jet fighter production “achievements”; One such recent achievement was the 2018 released Kowsar fighter jet, a “domestically-designed and manufactured fighter jet”, bearing unmistakable resemblance to the 1960s U.S. F-5 fighter jet. Continued waves of U.S. sanctions and pressure on nations seeking to sell arms to Iran dampen the nation’s ability to get out of this perceived aerial obsolescence quicksand.

Applying the view of Iranian aerial obsolescence as a broad stroke over the entirety of the Iranian aerial arsenal glosses over the very real and potent threat of emerging Iranian drones and cruise missiles. A rare glimpse into the potency of these technologies was the September 2019 attack on the Saudi oil facility at Abqaiq. But the Abqaiq attack only scratches at the surface of Iran’s drone and cruise missile capabilities and ambitions.

A couple weeks before the Abqaiq attack, an unusual scale model of an Iranian aircraft was presented at the MAKS 2019 airshow: the turbojet powered ‘Mobin’. While its manufacturer, the Iranian Aviation Industries Organization (IAIO), confirmed to Jane’s that the craft was a “multipurpose ground-launched UAV”, only days earlier Iranian press outlets including the Tasnim and Mehr News Agencies had clearly labeled the craft a cruise missile. Interestingly, the Mobin can actually be adapted for either a tactical UAV reconnaissance or cruise missile role.

The Mobin may signal the direction of future Iranian drone and cruise missile development, one in which these two traditionally distinct product paths merge to produce a common platform through which reconnaissance and cruise missile roles can certainly be fulfilled through current modularization and, through future iterations, UCAV, loitering munition, and SEAD roles can be achieved in a single platform. 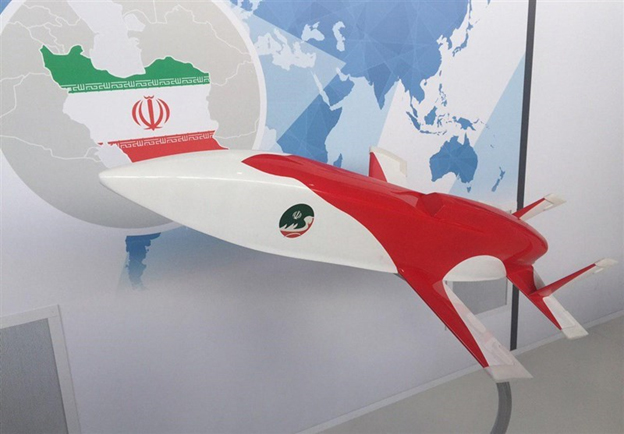 A scale model of the Mobin displayed at MAKS 2019.

With a payload of 120 kg (265 lbs) and a radar cross section (RCS) of less than .1 m2, the stealthy Mobin can fly at an altitude of 10 meters for 45 minutes and also boasts a top speed of 900 km/h (559 mph). For a cruise missile reference, the U.S. Tomahawk cruise missile has an RCS of around .5 m2 according to one source and .1 m2 according to another, but this number has likely decreased due to U.S. stealth improvements since the study dates. For a general RCS reference, a human has a 1 m2 radar cross section. The Mobin is powered by a single Toloo-4 compact turbojet which is slated to produce 815 pounds of thrust. The craft’s incorporation of terrain contour matching guidance (TERCOM) and digital scene matching area correlation guidance (DSMAC) provide the craft a lethal combination of being able to both fly low and to strike accurately, making it the ideal weapon to traverse the Strait of Hormuz and strike targets on the other side.

While the Mobin may showcase recent technological advancements in Iran’s aerial arsenal, Iran is no stranger to the drone battlespace. In July of 2019, the IRGC Aerospace Force (IRGCAF) was found to be employing the Iranian made Qods Mohajer-6 drone against Kurdish dissidents. In 2012, the capable Iranian made Shahed-129 drone was developed for the IRGC which was then later spotted in operation over Damascus in 2014. The IRGCAF has drone combat experience in multiple theatres in the region across multiple intensities over just the past decade that has battle hardened its drone pilots. The recent revelation that it was not an IRIAF but an IRGCAF air defense unit that shot down a civilian Ukrainian jetliner this month around Tehran has made it clear that the IRGCAF is tasked with more critical roles – like protecting the skies over Tehran. Given the IRGCAF’s prioritization within the Iranian Armed Forces, its influence in the development of drones, and its direct combat experience with drones, the IRGCAF, not the IRIAF, is the likely end user of the Mobin and in the future, more advanced Iranian offerings of cruise missiles and drones. This preference for the IRGCAF is also rooted in the doctrinal roots of IRGC combat units.

The cultivation of asymmetrical naval warfare crafts and tactics by the IRGCAF’s sister branch, the IRGC Navy (IRGCN) makes it palpable to envision the IRGCAF leveraging drones in both first and second strike capacities. Drone and cruise missile swarm tactics are likely part of the IRGCAF doctrine. In the near future, the IRGCAF drone and cruise missile force will likely develop potent and real SEAD capabilities to destroy enemy air defenses, threatening to open up gaps in enemy air defenses to then leverage other IRGCAF and IRIAF munitions platforms to destroy targets.

Returning to the greater discussion about Iranian aerial doctrine, an anecdote may show us a layer of the Iranian leader’s mindset that would otherwise be missed in doctrinal analyses. A 2018 video of Ayatollah Khamenei reminiscing about an early tank hunting experience with the 92nd Brigade during the Iran-Iraq War (1980-1988) shows the Ayatollah’s will to destroy Iraqi tanks though he is armed with only a Kalashnikov. He laughs as he comments that they had to return to base since they had no RPGs to destroy the enemy tanks. 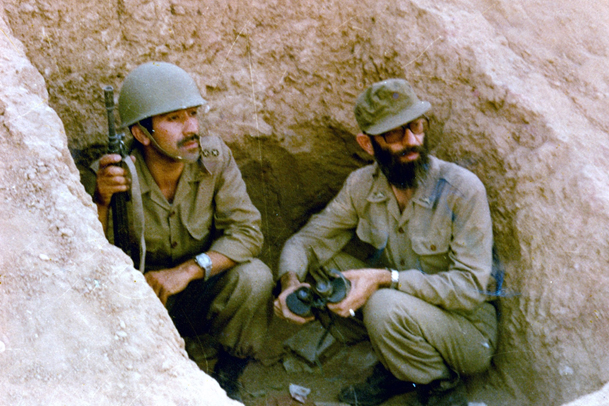 Even if Iran is able to procure modern aerial munitions and fighter jets, perhaps in October of 2020 if Russia sells such systems to Iran, Ayatollah Khamenei likely realizes that like the outgunned Kalashnikov wielding tank hunter he once was, he will still likely never procure symmetric munitions that will effectively counter Iran’s enemies. The continuing development of the IRGCAF’s offensive drone and cruise missile capabilities, however, give him a limited aerial capability window he and Iran so desperately need.

With Top Gun 2 set for release this summer, revived public interest in the F-14 may spur articles mocking the continued Iranian use of the F-14. Iran will likely continue presenting indigenous weapons to the ever increasing tune of laughter of the international community while perhaps cultivating such “advances” as propaganda items domestically. But one country won’t be laughing about Iran, Russia. Observers of Iran’s drone program would be keen to note the defense negotiations between Tehran and Moscow already underway in which Iran may be poised to be a drone exporter, further validating the potency of Iranian drone developments. Perhaps yet, these negotiations may afford the Iranian drone program a capability not yet realized: a beyond line of sight (BLOS) satellite uplink, transforming the limitations of line of sight drone operations and unlocking a beyond regional presence of Iranian drones.

Another mid-term possibility is that if Iran is able to progress in its nuclear weapons ambitions, and then in miniaturizing nuclear warheads like North Korea achieved in 2017,the Mobin or a future successor to the Mobin, could be modified into a crude, first strike, nuclear tipped stealth cruise missile with key cities like Dubai, Kuwait City, and Abu Dhabi well within its missile envelope. An increase in stealth missile range would put Riyadh within the Iranian cruise missile envelope. Only the Iranian leadership will be laughing if the threat from Iranian drone and cruise missile developments are not taken seriously.