Today is an appropriate time for encouraging and indeed advocating some further innovative change both to and for contemporary intelligence. This article aims to accomplish that objective by featuring and further advancing an understanding of the recently introduced and developing concept of ‘Intelligence Engineering’, abbreviated henceforth as ‘IE’, and also known as the ‘Bridgehead Methodology’.

Without the wholesale dismissal of previous intelligence efforts, and, in fact, as demonstrated, in many ways building on current intelligence endeavours to take them further forward in the current, early-2020 COVID-19/Coronavirus context, a claim prevails that contemporary to future intelligence work can be done ‘differently’. That is with Intelligence Engineering (IE) and what follows throughout this article proposed as a possibility- and opportunity-generating solution. A working definition of IE forms a helpful place to begin.

What is ‘Intelligence Engineering’ (IE)?

Defined most succinctly, ‘Intelligence Engineering’ (IE) is somewhat self-explanatory. Applying with note at a minimum to both ‘real’ and ‘artificial intelligence’ (AI) to evolving ‘collective intelligence’ or COLINT worlds, at its least, as stated in its companion textbook for training and education purposes, IE involves: ‘the use of scientific and technical knowledge to artfully create, operate, maintain, and dismantle complex devices, machines, structures, systems, and processes that support and/or disrupt human endeavour occurring in the intelligence context.’

However, IE is not - and in its intent is indeed deliberately and markedly distinct from, nor should IE be confused or conflated with - the more negatively-heading ‘engineering of intelligence’. That last mode of work involves activities - such as the popularly termed  selective ‘cherry-picking’ of intelligence from a smörgåsbord of sources - which have greater disturbing implications and dangerous ramifications, frequently including already from their outset.

Not at times without controversy, several common and substantive lessons from history, and especially those from foreign policy analysis, repeatedly and obviously teach that closely associated situations and conditions of ‘blowback’, for instance in relation to domestic and/or international affairs, are best firmly avoided. Conditions and situations of ‘disconnect’, or when episodes, events and developments are more ‘divorced from reality’ (however precisely ‘reality’ might be defined), are discouraged.

IE Represents Intelligence as ‘an Art’ and as ‘a Science’ Nexus

Effectively engaging and aiming towards an extended reconciliation of the age-old persistent, and well-worn, ‘intelligence as “an art”’ and ‘intelligence as “a science”’ debates through their greater nexus or fusion, IE harnesses both those worlds’ different, yet readily harmonisable, empowering qualities.

Due to its nature and rather like its parent of engineering, in its potent IE offers stakeholders an approach and methodology of optimally balancing viable ‘art’ and ‘science’-based ways, means and ends of conducting, for example, (advanced) intelligence analysis to assessment (estimate) work. That is as well as simultaneously addressing broader psychology-related ‘groupthink’ (essentially when all involved participants think alike) to ‘polythink’ (when all participants think differently and push to head in different directions, impeding subsequent courses of action) and ‘perseveration’ (sustaining something beyond optimal levels and limits) to ‘bias’ and ‘mirror-imaging’ concerns. Those traits, in their close consideration, and - most ideally - avoidance or mitigation when confronted, are immediately familiar to any intelligence analyst.

The IE purview extends further. Going beyond merely perhaps more spatially-orientated concerns and considerations, time factors also matter. In temporal terms, both a priori (before) and post facto (after) concerns and considerations feature during the course of IE. Those constructs figure in relation to broader (general) and/or more specific (bespoke) occurring episodes, events and developments - for instance, those occurring in domestic and international affairs - with a strong focus on ‘positioning’.

Ultimately, the positioning includes better getting ‘ahead of’ event and development ‘curves’ as they unfold, at times rapidly. When in this more pre-emptive or preventative conceptual space or location, distinct overlaps to - somewhat more widely understood - approaches, such as to John Boyd’s well-known airpower-related ‘OODA Loop’ of Observe, Orient, Decide and Act, are equally apparent.

IE ‘Stands on the Shoulders of Giants’, Yet Pioneers

As seen with the previous reference to John Boyd’s ‘OODA Loop’, in many ways IE demonstrably both builds on and brings together in order to take further onward in its distillation, a variety of already established ‘conventions’ for conducting contemporary intelligence analysis to assessment/estimate work.

IE’s core innovation is, therefore, very much being ‘highly connective’ in its originality and refinement. Also continuing to rapidly develop in parallel in their own contemporary evolution, three established intelligence analysis-related conventions most obviously standout for their further reference here.

More details now follow. While naturally not entirely perfect and subject to a number of professional caveats, necessitating their use in tandem, those above intelligence analysis-related constructs are particularly concerned with ‘to be considered’ theme-issue-problem-risk-hazard and up and across to threat spectrum-ranging ‘aspects’, ‘dimensions’, and/or ‘factors’. Those, in turn, are evaluated in the form of commonly adopted indicator and (strategic early) warning (SEW) processes, as they are progressed, as already witnessed, over several different geographies, spaces/places or locations, and varying timelines and timeframes. Many selection options or choices prevail as what become guiding frameworks to menus are laid out.

Firstly, there are a variety of closely ‘Strategic Futures/SFA’ and ‘Red-/A+B-Teaming’ associated approaches and methodologies drawn upon by IE. In their detail they are summarised effectively in ‘Figure 3.5 - The red teaming Venn diagram’ and 'Table 3.1’, as both published in the UK MoD’s DCDC, Red Teaming Guide (Shrivenham: UK Defence Academy, March 2013 [2nd edition]), across pages 3-9 to 3-11.

Extrapolating from that document, in terms of providing insights into their types that are most suitable for IE, the ‘Strategic Futures/SFA’ and ‘Red-/A+B-Teaming’ associated approaches and methodologies consist of: ‘Written Estimates’, ‘Futures Wheels’, ‘Trend (time/impact) Analysis’, ‘Force Field Analysis’, ‘Using Analogies (past/present)’, ‘Decision-Trees’, ‘other Indications/Indicator and Warning Systems’, and ‘Scenario Methods’, together with adopting other closely related ‘foresight’ and ‘environmental- to horizon-scanning’ techniques.

Further approaches, such as with ‘crowd-sourcing’ and greater ‘Collective Intelligence’-related methodologies, can be added to that above list of typologies. Many different ways to structure and provide direction to IE-related work soon standout. When highlighted, they also benefit from being employed in various combinations in their multiple harnessing and overlay.

Secondly, Federation-/System-of-Systems Dynamics or SoSD feature. As the supporting IE companion textbook - Svendsen, Intelligence Engineering - notes in-depth, SoSD units are harnessed ‘for the purposes of, first, analysis (SoSA), and then which areas should be focused upon for subsequent engineering (SoSE).’

Primed for their most judicious selection and use with due-diligence during the IE process(es), SoSD-based toolboxes and toolsets are formed and presented. Continuing:

As a rough guide, (1) STEEP(L)—social, technological, economic, environmental, political, and legal or legislative units should be drawn upon as they are commonly used in commercial and business intelligence–related contexts; (2) PESTLE—political, economic, social, technological, legal or legislative, and environmental units should be drawn upon in contexts related to those navigated by EUROPOL [(the European Union's Police Office)], such as the tackling of cyber and transnational and organised crime; (3) PMESII—political, military, economic, social, informational or intelligence, and infrastructural units should be harnessed in relation to contexts associated with the North Atlantic Treaty Organisation (NATO), such as crisis management and other activities in operational spaces and battlespaces; (4) DIME—diplomatic, informational, military, and economic units; and (5) HSCB—human, social, cultural, and behavioural dimensions—should be drawn upon in contexts similar to those negotiated by entities such as the U.S. Military both in war zones and in relation to humanitarian and disaster-relief operations.

Notably, discussion thus far throughout this article and examination of the book on SATs suggests that the SATs for ‘Decision support’, ‘5.1 Structured brainstorming’, ‘5.5 Cross-impact matrix’, and ‘5.7 Quadrant crunching’, alongside the SATs featured in chapter 6 of that previous volume, ‘Scenarios and indicators’, can all be cited most immediately as having particular relevance to IE and its progression. Isolated concepts are overridden.

Drawing on the IE Templates: An Initial COVID-19/Coronavirus Case Study

Next follows a couple of ‘screenshots’ of the first two IE tables or matrices, demonstrating how the COVID-19 or Coronavirus of early-2020 can be evaluated using the IE approach and the IE templates: 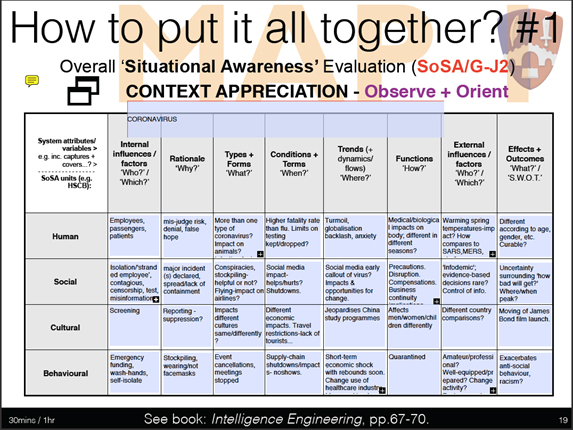 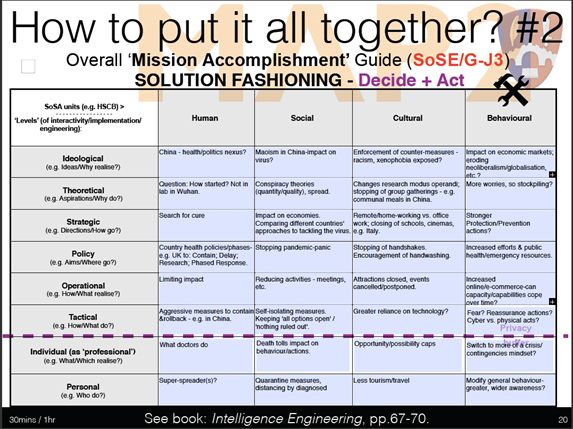 Conclusion: IE as ‘Operating Beyond the Conventional’

The overall conclusions of this article contend that IE work is increasingly representative of ‘operating beyond the conventional’. This is demonstrated in all of IE’s heralded ‘specialness’ extending beyond merely ‘classical’ or ‘traditional’ and ‘supportive’ intelligence operational parameters and functions; with today there being a greater leading, directing, and even shaping role both for and demanded of intelligence. Enterprise-related intelligence performance and organisation(al) considerations remain readily open to further optimisation efforts, together with being implemented in a greater combined manner. IE assists.

IE accordingly further lives up to its ambition of ‘doing intelligence differently’. A consideration that includes the different conduct of intelligence in advanced intelligence analysis and assessment/estimation domains that are rapidly unfolding in relation to contemporary operational- to battlespaces. That is however those contexts might be precisely defined and described in all of their rich macro- to micro-ranging detail, such as spanning from conducting multi-functional to special operations - for example, ranging from counter-terrorism (CT), counter-proliferation (CP), counter-organised crime, and counter-insurgency (COIN) to ‘high-end warfare’ in domestic and international affairs - to navigating globalised strategic risk (GSR) in and across multiple (multi-)domains of activity, such as physical (sea, air, land and space) and virtual (cyber/digital).

Today’s multiple complexities, whether geostrategic or something else quite alternative, always benefit from being better understood. As introduced above - illustrated with drawing on the mini-case study example of the contemporary early-2020 COVID-19/coronavirus challenge - and (at least semi-) structured around IE templates, IE and its associated SoSD-based toolboxes and toolsets suggest that mechanisms for generating greater insight, with the added capability for fostering empowering directions and options for going further forward, are able to be fast available at hand. Continuing to rapidly evolve - together with alongside offering a series of developmental workshops and other facilitators that extend beyond, as well as able to be delivered more remotely via digital means - IE strives on.

Salem B.S. Dandan, is an established security researcher & educator, who specialises on the Middle East. He has an extensive background in both the public & private sectors & as a business entrepreneur - see more here.

Very interesting article! I think the engineering industry is very important to us now. Therefore, there are a lot of companies on the market that provide such services. I collaborated with Engre.co about the aircraft technical support and I can say that they are the best. Engre.co assist in organizing automation at factories and enterprises, which will ensure energy savings, protection against data leakage, and full control over all processes. This optimization will protect the company from emergency shutdowns and will allow the equipment to be properly operated.

"Boyd’s key post-modern insight from science is the fundamental uncertainty inherent in any system for observation, explanation and prediction and the reflexivity of knowledge."

The OODA loop is about exploiting knowledge of the adversary and uncertainty to manipulate the operating environment in order to “Unstructure adversary’s system into a “hodge podge” of confusion and disorder by causing him to over and under react because of activity that appears uncertain, ambiguous, or chaotic.” Boyd, New Conception for Air-to-Air Combat, Slide 22.

The lessons from COVID-19 are:

None of this is to suggest that intelligence and planning are bad ideas. However, uncertainly must always be a key planning consideration. Naval Doctrine Publication 6, “Naval Command and Control.” Department of the Navy (USA), 1995, illustrates Boyd’s concepts of exploiting uncertainty in adversarial engagements.