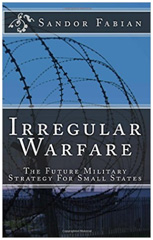 The military strategy for the defense of the homeland that a sovereign nation chooses to employ for its armed forces is one of the most important choices it makes. That decision holds implications for that nation’s budget, natural resources, and human capital and reflects parts of its national identity. This book offers a twist on the concept of defense of the homeland, by taking a position that seems counter-intuitive for the organization of a state’s military and strategy. In order to conserve resources and maintain independence, the author argues that small states should begin to look to the lessons of guerrilla warfare and professionalize it in order to deal with threats from large conventional forces.

The key thesis of this book is to “analyze the theory that it is possible to use irregular warfare as a national military strategy to adopt a ‘professional irregular defense force’ concept as a country’s homeland-defense force; and, if these are indeed valid possibilities, to explore the conditions under which they are preferable to conventional defense”. Borrowing Michael I. Handel’s definition for a small state, the author, Sandor Fabian, defines it as “a state which is unable to contend in war with the great powers on anything like equal terms”. The book is built around the premise that in the post-Cold War era, the best strategy for defense for a small state is deterrence and that denial, as a subset of deterrence, is the implementation of guerrilla strategy. He defines the traditional strategies small states used for deterrence in four general manners: 1) imitating a major power’s military capability, 2) joining an alliance, 3) assuming neutrality and 4) acquiring weapons of mass destruction. Readers will most likely agree that these traditional strategies pose significant challenges for small states with limited resources. He argues instead that small states should then begin to consider implementing an irregular strategy, which builds on the tenets of guerilla warfare, as a legitimate form of homeland defense.

In his background we find that the author is experienced in guerilla and irregular warfare techniques and possibly predisposed to find the best cost-benefit ratio for the employment of forces of a small state. His experience has almost exclusively been in Special Operations communities, which appears to color his arguments. Not all readers will find that the concept is entirely unique or feasible, since the author does not offer recommendations for expense, size, organization or framework for implementing such a strategy in an existing country. However, he does make a compelling case for exploring the approach further and it does merit serious consideration because the subject does not appear to have been thoroughly addressed outside of this book as a legitimate enduring state strategy.

He begins by referencing key lessons on irregular and guerrilla warfare from writings from Sun Tzu, Carl Von Clausewitz, Mao Zedong, Ernesto “Che” Guevara and General Vo Nguyen Giap to argue that for small states, a conventional military strategy is not possible and instead, an irregular military strategy presents the best chance to fulfill the needs of a small state in self-defense of territory.

To make the case that irregular strategy is a viable option for small states he employs a case study method, looking at six irregular strategy wars. The research is thorough and detailed, with the structure of the book suiting the argument well by providing an overview of the terms and concepts as a point of departure and then entering into the case studies by focusing on the overview of the war, and subsequent details of the irregular strategy, the organization and leadership of the irregular force, the internal workings of the force and the external influences of terrain and international support. Fabian chose to focus on the American Revolutionary War 1776-1783, the 2nd Boer War 1899-1902, the War in German East Africa 1914-1918, the Yugoslav Partisans 1941-1945, the First Russo-Chechen War 1994-1996 and the Second Lebanese War 2006.

In each case-study, the author conducts analysis of the irregular strategy employed, the organization & leadership, the internal factors and then the driving factors that provide valuable insight. Fabian drives the reader to the conclusion that it is possible for a small state to employ irregular warfare as a homeland defense strategy by highlighting necessary components that would make it successful, referencing five examples where it worked and one where it did not. Small state defense through irregular strategy is feasible, but given his examples, does not appear to be possible without key advantages that are not universal. Fabian’s analysis attempts to codify the key components for a small state to execute a successful irregular strategy which include: 1) the necessity of a firm and unified political will among the small country’s leaders in favor of an irregular defense strategy and professional irregular defense force, 2) willing leaders from the highest to lowest levels who understand and accept the necessary changes in the existing conventional force structure training system and military culture as a whole, 3) rough natural physical terrain and severe weather conditions that play crucial factors in waging irregular warfare because they degrade conventional military advantages, 4) high level of importance placed on self-reliance and self-sustainment and 5) the importance of knowing the enemy as much as possible while protecting the irregular force’s own information from discovery. Absent, however, is a discussion of what role, if any, great power support could play in implementing an irregular warfare strategy and how the small states objectives could be nested with a great power’s objectives.

What can be drawn from the case studies is that the concept of irregular strategy is comprised of multiple ingredients that are working against a conventional mindset. This poses a problem for small states that want to engage in irregular strategy and reorganize their forces to that end, while operating in a globalized world. They would be an outlier in the international community and be a confusing military partner to engage with. However, that fact does not discount that the irregular strategy may indeed be best suited for a nation that wants to be isolationist. Another key point to identify is that throughout all the case studies there was incredible leadership exhibited by those in charge of irregular forces, which was grown out of conventional warfare training.  The notable exception being Hezbollah, where conventional warfare training was not prevalent, however they nonetheless learned their first lessons by attempting to wage conventional warfare against Israel during the First Lebanese War. This leads this reader to believe that it would be more prudent to raise a conventional army, simultaneously with an irregular warfare element than to exclusively raise an irregular army for all purposes.

Fabian provides a final analysis chapter where he emphasizes his main argument that small states cannot effectively rely solely on deterrence as their main strategy and must consider transforming their militaries into irregular warfare experts. The book is well researched, citing over 100 references properly in the Turabian format. Unfortunately, throughout the book there are minor grammatical errors that detract from the argument being presented. His concept of irregular warfare for a small state is intriguing and needs to be unpacked further to account for the institutional biases and constraints that would arise from actually implementing this concept. Unconventional, irregular tactics have successful precedents throughout history, but are not necessarily considered a definite strategy for an established small state.

Vincent A. Dueñas is a recent graduate of the Master of International Public Policy program at the Johns Hopkins School of Advanced International Studies. He is an Active Duty Army Major with deployments to Afghanistan and is also an Associate Member of the Military Writers Guild. This essay was written to fulfill a requirement in his graduate degree program. The views reflected are his own and do not represent the official position or opinion of the United States Government or any of its agencies.

Does anybody have the e-book…

Does anybody have the e-book or PDF version of this book? I'm currently earning my Master's in International Relations, and need this book for my upcoming class. I'm currently stationed in Guinea, west Africa and won't receive the paper back version in time. Can anybody help?

LTG Flynn in context.
In LTG's book he neither lays the blame for the Islamic State on either Bush or Obama. He recognizes the fact its a Middle Eastern entity that can not be blamed largely on the external influence of the USA or in spite of. But it does conform with this paradigm, in that LTG Flynn lays the blame on Saddam Hussein.
While the Russians coalition for Assad fights Al-Qaeda cells and Al-Nusra in Aleppo the Iraqis lead by Obama's coalition are fighting elements of the Fedeyeen and the bearers of the torch Hussein's Fedeyeen and Al-Qaeda passed to them. Hussein had the vision of creating Fedeyeen fighters to resist in exactly the manner described in this synopsis.
It is from that antecedent the Islamic State grew out of ad hoc elements of Fedeyeen, al-Qaedas and morphed into radical Islamists. In LTG Flynn's brief analysis the germ of the religious fanaticism was planted and arose during the conflict with Iran when Hussein was concerned by the Ayatollah's propaganda regarding his lack of commitment to Islam.
what the synopsis here disregards is how these major cross cultural themes like radical Islam transcends borders, just as communism once inspired revolutions. A parochial government might implement plans to control an insurgency structure but it may prove difficult to control and harness especially in countries with oppressive regimes who might end up only sowing the seeds for "revolution".

Or Yugoslavia until Tito's death. Since he declined to have Yugoslavia join the Warsaw Pact, Tito expected to be attacked by both NATO and the Pact...the Yugoslav Army was supposed to fall back on fortifications and stockpiles of arms and supplies in central Bosnian mountains, and conduct guerilla warfare throughout the rest of the country.

It of course depends who the enemy is. If you're worried about a super power it would seem your first choice should be nuclear weapons. If that's not available then some sort of guerilla war would be advisable. Massing your tanks and guns to confront III Corps and it's air force pals would be suicidal so your best bet is to ensure you make an occupation untenable. IEDs, bridges prepared for demo, arms caches, snipers, ATGW, MANPADS, military training in high school, tunnels....the recipe is well known.

The problem that comes with preparing for this strategy is keeping control of the "commandos" and the arms you give them. Stocking hundreds of small armories with demo, MGs and AT weapons would obviously pose serious security concerns and some of your best "soldiers" might be quite unsavory.

I think I've more or less described Switzerland or perhaps The Transvaal circa 1880.