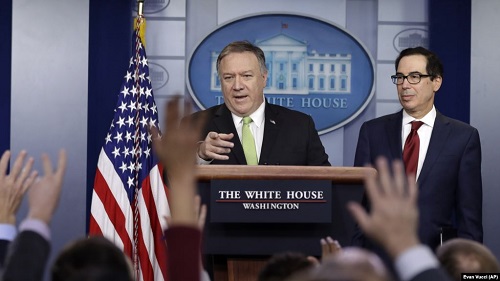 WASHINGTON -- U.S. Secretary of State Mike Pompeo maintains that various sectarian leaders in Iraq support the presence of U.S. forces in the country, despite public demands for them to leave.

While fielding questions from students at Stanford University in California on January 13, Pompeo said a “broad spectrum” of Sunni, Kurdish, and Shi’ite leaders back U.S. counterterrorism efforts in Iraq.
https://www.state.gov/the-restoration-of-deterrence-the-iranian-example/

“They won’t all say so publicly, but privately, they all welcome the fact that America is still there executing its counterterror campaign…and providing an opportunity for the Iraqis to gain sovereignty and independence that most Iraqis want,” Pompeo alleged regarding his phone conversations with around 50 Iraqi community leaders.

Iraq’s parliament on January 5 adopted a resolution calling for foreign troops to leave the country in the wake of a U.S. air strike that killed a top military commander from Iran, whose influence in the country rivals that of the United States.

The Iraqi government “commits to revoke its request for assistance from the international coalition fighting [the Islamic State (IS) extremist group] due to the end of military operations in Iraq and the achievement of victory,” the lawmakers said in the nonbinding resolution.

The killing marked a significant escalation between Iran and the United States, and angered Iraq’s Shi’ite majority who enjoy religious ties with Iran.

The United States has some 5,000 military personnel in Iraq, mainly as advisers.

“And I think we can achieve both of these goals – reduce our footprint, reduce our risk, while still achieving the American objectives in the region, including in Iraq,” he said.