U.S. Pulling Some Combat Troops Out of Africa

U.S. Pulling Some Combat Troops Out of Africa 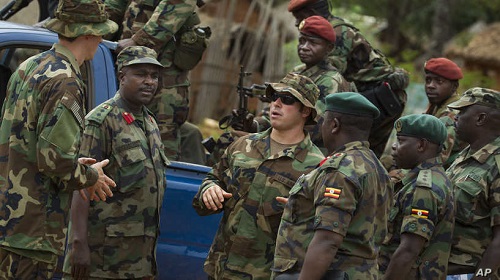 PENTAGON - The United States is starting to change its force posture in Africa, announcing it is bringing home part of an infantry brigade and replacing them with specialized military trainers.

Pentagon officials described the move as "the first of many" that will impact the way the U.S. military operates on the continent, as it shifts its focus from counterterrorism to the great power competition.

In a statement Wednesday, Pentagon Press Secretary Alyssa Farah said the move will help the U.S. "better compete with China and Russia in Africa."

Farah said the U.S. will start bringing home combat troops with the Army's 101st Airborne Division in the coming weeks.

In their place, the U.S. will be sending members of the Army's 1st Security Force Assistance Brigade (SFAB) to work with forces in what defense officials called "spotlight" countries.

"SFABs are manned, trained and equipped specifically for the train, advise and assist mission," Farah said in the statement, adding it was a task they could do "more efficiently than conventional units."

The move is expected to lower the total number of U.S. forces deployed to Africa, and it comes as Pentagon officials are reviewing plans to reduce the estimated 6,000 U.S. troops in Africa.

The shift also comes as a new U.S. report warns the danger from terrorist groups in Africa is spreading and that many African forces are not ready to take on the terror threat alone.

Still, top defense officials insist whatever changes are made, the U.S. is not going to abandon African allies.

"We're not walking away," Major General Roger Cloutier, the commander of U.S. Army-Africa, told Pentagon reporters by phone Wednesday from Vicenza, Italy. "We are still engaged."

Cloutier said the U.S. is continuing to plan exercises and other training missions with partners across the continent — with 300 planned for this fiscal year alone.

He also said the U.S. is preparing to have 4,000 troops participate in the "African Lion" exercise in late March, joining 5,000 troops from African and allied countries.

"The United States and the U.S. military is still committed to being great partners," Cloutier said, adding he would emphasize that message during a summit with African militaries later this week in Ethiopia.

Other U.S. defense officials said Wednesday the decision to send in troops with the Security Force Assistance Brigade actually will make the U.S. a better partner. Its soldiers, they say, are better positioned to establish relationships and to meet the needs of partner nations.

That is something the Pentagon sees as critical as it competes with China and Russia, both of which have made significant investments in Africa, with both troops and resources.

Defense intelligence officials have raised concerns, in particular, about China, which is now offering training and technical assistance in addition to arms and other weapons.

At the same time, top defense officials have suggested U.S. military might could be replaced, in part, with diplomatic efforts, as well as with humanitarian and economic aid.

They also are pushing allied countries to do more in Africa, especially when it comes to combating terror.

"[In terms of] Our European partners, there is room for them to step up in Africa and to do more," Defense Secretary Mark Esper told reporters while on his way to Brussels to meet with NATO allies.

There are some signs U.S. allies are willing to help.

France, which already had 4,500 troops in Africa, recently announced it is sending another 600 military personnel to the Sahel to increase pressure on the Islamic State terror group's affiliates in the region.

But during a visit to the Pentagon last month, French Defense Minister Florence Parly cautioned U.S. capabilities in intelligence and surveillance cannot be replaced.

"The U.S. support is critical to our operations," she said at the time. "Its reduction would severely limit our effectiveness against terrorists."

Allies like France are not alone in their concerns.

The Republican chairman of the Senate Armed Services Committee, while praising the decision to send Security Force Assistance Brigade personnel to Africa, cautioned it alone is not enough.

"The SFAB's capabilities are well suited for many of AFRICOM's important missions to train and advise our partners on the continent," Senator James Inhofe said in a statement Wednesday. "At the same time, the growing security threats in Africa — from terrorism to China and Russia — require additional capabilities that special operations and other troops currently serving there provide."