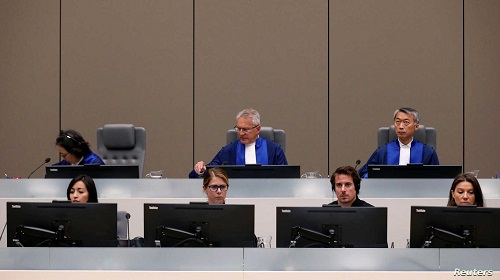 The United States severely criticized the International Criminal Court (ICC) on Thursday for authorizing an investigation into war crimes allegedly committed by American armed forces and other parties to the conflict in Afghanistan.

“This is a truly breathtaking action by an unaccountable political institution, masquerading as a legal body,” Secretary of State Mike Pompeo told reporters in Washington just hours after the ICC announced its ruling.

“The ICC today stumbled into a sorry affirmation of every denunciation made by its harshest critics,” he said.

The ICC in The Hague announced its ruling Thursday, overturning an April 2019 rejection of the probe into allegations of crimes against humanity in Afghanistan.

“The Appeals Chamber considers it appropriate to amend the appealed decision to the effect that the prosecutor is authorized to commence an investigation into alleged crimes committed on the territory of Afghanistan since May 1, 2003,” Presiding Judge Piotr Hofmanski said.

The decision will allow ICC Prosecutor Fatou Bensouda to examine the actions of U.S. armed forces and members of the CIA, the Taliban insurgency, Afghan government security forces and other armed groups operating in Afghanistan.

Pompeo reiterated Washington is not a party to the ICC and said all necessary measures would be taken to protect American citizens from what he called “this renegade, unlawful so-called court.”

Pompeo did not elaborate but in a statement last year, the top U.S. diplomat said that the Trump administration would revoke or deny visas to ICC staff seeking to investigate war crimes and other abuses allegedly committed by U.S. forces in Afghanistan.

Washington disputes the ICC's authority over U.S. citizens. Afghanistan, however, is a member of the global court.

Pompeo accused the global court of becoming a “vehicle for political vendettas,” saying the multilateral body lacked oversight and responsible leadership. He went on say the Afghan government itself pleaded with the ICC not to take this course.

Since 2017, Prosecutor Bensouda has been seeking a formal investigation into the alleged crimes.

The Afghan government has also opposed the investigation.

The  ICC ruling comes just days after the United States and the Taliban signed a landmark agreement to try to bring an end to the Afghan war, now in its 19th year.

“It is all the more reckless for this ruling to come just days after the United States signed an historic peace deal on Afghanistan, which is the best chance for peace in a generation,” Pompeo said Thursday. He was referring to the U.S.-Taliban agreement the two adversaries signed in Qatar on Saturday to close their conflict and allow U.S. troops to withdraw from the country.

Afghan and global rights groups hailed the ICC for upholding the rights of victims, and paving the way for the United States to be held to account for the first time for its actions in Afghanistan.

The Afghanistan Independent Human Rights Commission (AIHRC) called the decision an “important step for justice in Afghanistan,” while Amnesty International said the ICC reversed “a terrible mistake” and decided to stand by the victims whom it said have been “shamefully ignored” for years. Amnesty said the decision will be "extremely popular with those fighting for justice and deeply unpopular with the parties to the conflict, including powerful states that attempted to bully the court and who have eluded it for so long."

“Today, the International Criminal Court breathed new life into the mantra that 'no one is above the law’ and restored some hope that justice can be available — and applied — to all,” said Katherine Gallagher, senior staff attorney at the Center for Constitutional Rights (CCR) and ICC Victims Legal Representative.

“In authorizing this critical and much-delayed investigation into crimes in and related to Afghanistan, the court made clear that political interference in judicial proceedings will not be tolerated,” noted Gallagher.

A 2016 ICC report focusing on Afghan hostilities concluded there was a reasonable basis to believe that the U.S. military, Afghan government and the Taliban committed war crimes.

Prosecutor Bensouda alleged while arguing before the judges last year that members of the U.S. military and intelligence agencies “committed acts of torture, cruel treatment, outrages upon personal dignity, rape and sexual violence against conflict-related detainees in Afghanistan and other locations, principally in the 2003-2004 period.”

She said the Taliban and other militant groups have killed thousands of Afghan civilians since 2009 in attacks, including targeted killings. The report accused Afghan security forces of torturing prisoners at government detention centers.

At a hearing before the Appellate Chamber in December, the Afghan government said it objected to the investigation and had set up a special unit to investigate war crimes.

There was no official U.S. delegation at the hearing, but President Donald Trump’s personal lawyer, Jay Sekulow, appeared on behalf of the European branch of the American Center for Law and Justice and told judges that the U.S. position would not change.

Sekulow said, “It is not in the interests of justice to waste the court’s resources while ignoring the reality of principled non-cooperation.”