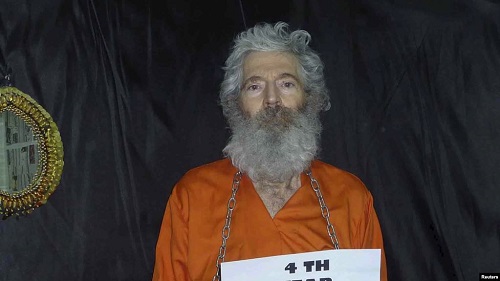 The United States has demanded that Tehran give “a complete accounting” of happened to retired FBI agent Robert Levinson, who is believed to have died in Iranian custody.

"While the investigation is ongoing, we believe that Bob Levinson may have passed away some time ago," White House national-security adviser Robert O'Brien said in a statement on March 25 about the 58-year-old American who disappeared in Iran 13 years ago.

"Iran must provide a complete accounting of what occurred with Bob Levinson before the United States can fully accept what happened in this case," O’Brien added.

Levinson's family said earlier in the day that it had received word about his likely fate from the U.S. government.

“We recently received information from U.S. officials that has led both them and us to conclude that our wonderful husband and father died while in Iranian custody,” the Levinson family said in a statement.

"We don’t know when or how he died, only that it was prior to the COVID-19 pandemic,” it added.

Following the family's announcement and before O’Brien’s comments, President Donald Trump told reporters that “I won't accept that he's dead."

Levinson was “sick for a long time” before he was detained, Trump said, adding that he felt “terribly” for the family but still had some hope that Levinson is alive.

“It’s not looking great, but I won’t accept that he’s dead,” Trump said at a White House news conference. "They haven't told us that he's dead, but a lot of people are thinking that that’s the case."

Levinson disappeared when he traveled to the Iranian resort of island Kish Island in March 2007. He was working for the CIA as a contractor at the time.

The United States has repeatedly called on Iran to help locate Levinson and bring him home, but Iranian officials said they had no information about his fate.

However, when he disappeared, an Iranian government-linked media outlet broadcast a story saying he was "in the hands of Iranian security forces."

The Levinson family said he would be alive today “if not for the cruel, heartless actions of the Iranian regime."

“How those responsible in Iran could do this to a human being, while repeatedly lying to the world all this time, is incomprehensible to us. They kidnapped a foreign citizen and denied him any basic human rights, and his blood is on their hands,” the statement added.