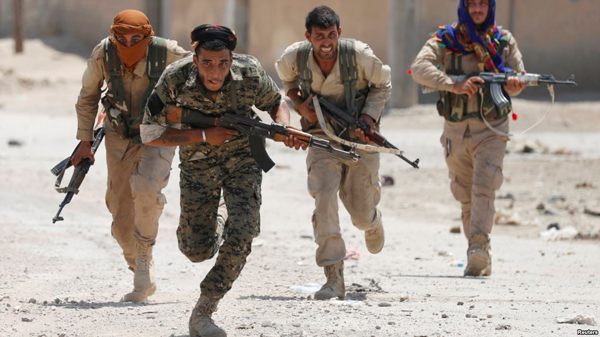 Turkey is building up military forces on the Syrian border, while Turkish President Recep Erdogan steps up his rhetoric suggesting an imminent military operation into Syria. Ankara is reportedly courting Moscow for its support for a possible operation into Syria's Afrin enclave, which is now under the control of the Kurdish YPG militia.

Ankara accuses the YPG, which controls large swathes of Syrian territory along its border, of being an offshoot of the PKK, which is fighting the Turkish state.

“We will take important steps to implement the new campaigns in the near future,” Erdogan declared Saturday to cheering supporters in the Turkish city of Malatya. “We would rather pay the price for foiling plans targeting our future and liberty in Syria and Iraq, than on our own soil.”

The prospect of a military operation has been praised across Turkey’s pro-government media. "Our greatest advantage is the leadership of a president who sees this threat exactly ... and responds to it courageously, both by discourse and by action,” wrote Mehmet Acer in the staunchly pro-Erdogan Yeni Safak. He welcomed "this new attack-based security approach, which we define as the 'Erdogan doctrine'.”

Erdogan is courting nationalist voters, with one eye on looming presidential and parliamentary elections which could be held as early as next year.

The rising political rhetoric has been matched by a reported surge in attacks against the YPG in Afrin by elements of the Turkish backed Free Syrian Army (FSA).

Turkish forces, as part of Operation Euphrates Shield, entered Syria backing elements of the FSA against both Islamic State and the YPG. The FSA is on the border with the Afrin enclave but so far further gains have been stalled.

“Turkey’s Operation Euphrates shield was stopped by moves by both United States and Russia,” said retired senior Turkish diplomat Aydin Selcen, who is now an regional analyst. Both Russia and the U.S. deployed military forces as a buffer against further gains by Turkish-backed forces in Syria.

“The problem facing Turkey is Russia and the U.S. are stopping Turkey from intervening,” said Semih Idiz, political columnist for the Al Monitor website. "They are agreed on an overriding agenda [of] defeating ISIS (Islamic State). Now Turkey has this Kurdish agenda and it does not have support of either Russia or the Untied States ... That is the dilemma facing Turkey."

Moscow has deployed military forces in the YPG-controlled Afrin region, some of them reportedly close to the Turkish border. But, “Turkey sees a window of opportunity,” said analyst Selcen. “Now there is a change on ground between Russia and U.S.”

Selcen said Moscow is infuriated by the growing military cooperation between the YPG and the U.S. to drive the Islamic State from its self-declared capital of Raqqa. The YPG makes up a large proportion of the Syrian Democratic Forces seeking to capture Raqqa, an operation that excludes the Syrian regime.

Russian frustrations were heightened in June when a U.S. jet shot down a Syrian government fighter-bomber reportedly targeting SDF forces.

Ankara has stepped up its diplomatic courting of Moscow, having announced plans last month to purchase an advanced Russia air defense system. The Turkish foreign minister, Mevlut Cavusolgu, spoke on Sunday with his Russian counterpart Sergey Lavrov on the sidelines of the ASEAN meeting in Manila.

Turkish, Russian and Iranian officials are scheduled to hold a two day meeting on Syria beginning Tuesday in Tehran.