Struggling to Save Peace Talks, Afghanistan Now Must Deal With Refugee Return

Struggling to Save Peace Talks, Afghanistan Now Must Deal With Refugee Return 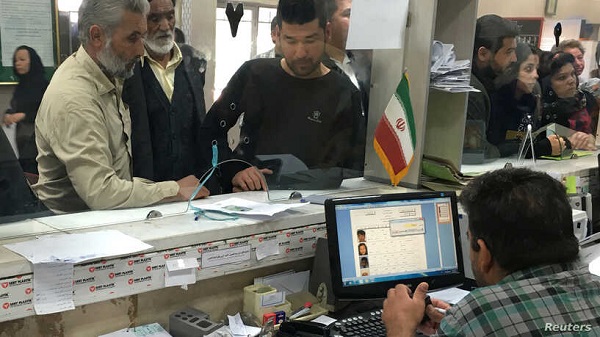 With peace talks between the government and the Taliban teetering, and a dispute between President Ashraf Ghani and his rival, Abdullah Abdullah, causing a political impasse, Afghanistan is bracing for yet another dilemma: the return of tens of thousands of Afghan refugees from Iran and Pakistan amid fears of the COVID-19 outbreak.

According to Afghanistan’s Ministry of Refugees and Repatriation, over 150,000 Afghan refugees have returned from Iran since late February.

Sayed Abdul Basit Ansari, the ministry’s media adviser, told VOA that the influx was due to fears among the refugees that Iran has turned into the coronavirus epicenter in the region, with more than 27,000 confirmed cases and 2,000 deaths.

“We have some Afghans who are deported from Iran, but most of them are returning voluntarily. They return because they fear contacting the virus in Iran,” said Ansari, adding that an average of 10,000 Afghans every day are crossing the border from Iran.

The U.N. refugee agency, UNHCR, estimates that 3 million Afghans are living in Iran; about 900,000 are refugees, and the rest are documented or undocumented Afghans.

Earlier this week, local Afghan outlets reported that Afghans in Iran were being denied health care services, despite the increased number of cases. Iran’s health ministry, however, rejected the claims, saying 18,000 Afghans had been treated in Iran’s hospitals.

Afghanistan had reported 80 confirmed cases of COVID-19 as of Wednesday, with the majority of the people infected in Iran, according to Afghan officials. The country’s health minister, Ferozuddin Feroz, has warned that the virus could kill 110,000 Afghans if its spread is not controlled.

Afghan authorities Wednesday put Herat, Farah and Nimruz provinces near Iran on lockdown. They shut the country’s borders with Iran in late February, but that measure lasted only two days because the “citizens of Afghanistan have the right to return to their country,” said Alema Alema, Afghanistan’s deputy minister of refugees and repatriation affairs.

With the large number of returnees and limited testing capacity, health officials admit that positive COVID-19 cases could be much higher than reported. The only hospital for coronavirus testing so far is in Kabul. Officials say international organizations such as UNHCR and the International Organization for Migration have offered to help, but an effective response to the pandemic needs much swifter action.

Nader Farhad, spokesman forUNHCR in Afghanistan, told VOA that the organization was hiring 20 more staff members to help the Afghan government with awareness, registration and coordination tasks at the border crossings. The organization will ensure the border has proper “crowd management, cleanliness, maintenance and lighting” needed for better screening, Farhad said.

Farhad said that proper screening at the border was not enough to contain the COVID-19 outbreak. He added that many who have been tested are allowed to roam freely in Afghanistan, making it impossible to track them later.

“Those who have returned do not necessarily go to their villages, or even their provinces that they reported. They may go to live in cities, since most of them used to live in cities in Pakistan and Iran,” he told VOA.

Wahidullah Mayar, a spokesman for Afghanistan’s Ministry of Public Health, told VOA it was possible that some returnees could avoid the border screening by crossing into areas uncontrolled by the Afghan forces.

“Even if the government wanted to close the border points, people would use illegal crossings along the border,” he warned.

In mid-2017, Pakistan launched a massive military-led construction program to fence off its border with Afghanistan. Pakistani officials say the fence, set to be completed this year, will improve border security by limiting militant infiltration. However, Afghan officials say the fence could separate thousands of cross-border families.

According to UNHCR, there are about 2.5 million Afghans living in Pakistan, of which 1.4 million are registered by the agency as refugees. The organization estimates that since 2002, over 4.4 million Afghan refugees have returned to Afghanistan under its Voluntary Repatriation Program.

The government in Islamabad says an additional 880,000 Afghans reside in Pakistan and hold Afghan Citizen Cards (ACC). The rest, estimated at 400,000 to 500,000, reside illegally in the country without proper documentation.

Qaisar Afridi, spokesman for UNHCR in Pakistan, told VOA that the organization earlier this month resumed its voluntary repatriation program at its centers in Azakhel village of Nowshera district in Khyber Pakhtunkhwa, and in Baleli village of Quetta district in Balochistan, after a three-month winter break.  Each registered individual receives $200 upon returning to Afghanistan to ease resettlement.

Afridi said 28 people from nine families were returned to Afghanistan, but the process stopped because of the closure of border-crossing points.

“UNHCR and health partners carry out regular hygiene promotion activities within the refugee villages. The community workers are prioritizing and creating awareness among the refugees about the coronavirus,” he told VOA.

Nisar Azizi, refugee attache at the Afghanistan consul general in Quetta, told VOA that even after the coronavirus outbreak is controlled, most Afghan refugees wish to remain in Pakistan until a lasting peace is established in Afghanistan.

Azizi said he was in touch with Afghan refugees in 12 refugee villages and camps in Quetta, and “they didn't show a willingness for the voluntary repatriation to their homeland because of the worsening security situation and unavailability of jobs” in Afghanistan.

He said many Afghans, particularly those who migrated to Pakistan during the Soviet invasion of Afghanistan in 1979, have intermarried and established themselves in Pakistan over the years.

“Their youngsters are happy to stay in Pakistan,” he said, adding that “if the government of Pakistan doesn't push them by force, they will never move or repatriate to Afghanistan.”