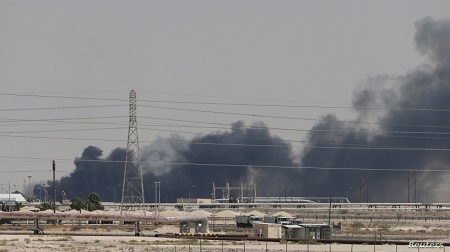 Amateur video of the early morning attack in Abqaiq, in eastern Saudi Arabia, showed several blazes raging. By afternoon, video showed huge plumes of smoke rising into the sky. Saudi officials said no workers were killed or injured in the attacks.

A military spokesman for Yemen’s Houthi militia, Col. Yahya Saree, claimed responsibility Saturday for the drone attacks on Saudi oil facilities and vowed to increase them if Saudi-coalition forces continued their strikes on targets inside Yemen. It was not clear, however, if the drones originated in Yemen.

Saree said 10 (Houthi) drones hit the two oil facilities run by Saudi Aramco, the state-owned oil giant. He said the attacks are being dubbed “Operation Balance of Terror” and are a response to what he called the “ongoing crimes of blockade and aggression on Yemen” (since the Saudi-led coalition began battling the Houthis five years ago).

Saree claimed the attack was the “largest to date” and that it “required extensive intelligence preparations,” including information from sources inside Saudi Arabia.

Later Saturday, however, U.S. Secretary of State Mike Pompeo blamed Iran for the attacks on the Saudi oil plants, and ruled out involvement by Yemen’s Houthis.

“Amid all the calls for de-escalation, Iran has now launched an unprecedented attack on the world’s energy supply. There is no evidence the attacks came from Yemen,” he said in a tweet.

The attack on the oil processing sites in Saudi Arabia happened around 4 a.m. local time.

Residents of Abqaiq posted video of what appeared to be Saudi anti-aircraft guns firing into the air at the drones, as the attacks took place. Some Arab news channels claimed that Saudi air force early warning planes were dispatched to the country’s northern border, amid fears the drones were coming from Iraq. VOA could not independently confirm the allegations.

James Krane, a Middle East energy specialist at the Baker Institute at Rice University in Texas, told Reuters, “This is a pretty serious escalation of the proxy war between Iran and Saudi Arabia. With something like this, we might see the U.S. get dragged in. Iran is telling us, ‘You need to put us on the front burner.’

“They’re not going to be put out of the picture forever. With (former U.S. national security adviser John) Bolton out, who knows? It is hard to see that Bolton’s departure isn’t part of the calculus,” Krane added. “Iran is stepping up what they see is its defense and looking for us to make the next move, and we’ve just fired the hardest-line guy in the Cabinet.”

The attacks Saturday were the latest of many recent such assaults on the Saudi Arabia’s oil infrastructure, and they have been the most destructive.

Saudi Energy Minister Prince Abdulaziz bin Salman said in a statement by the state-run Saudi Press Agency Saturday that the damage at the facilities led to “the temporary suspension of production operations,” affecting an estimated 5.7 million barrels of crude supplies at the Abqaiq site and the Khurais oil field.

Saudi Aramco said in the statement some of the shortage would be offset with stockpiled supplies and added it would provide additional information in the next 48 hours.

The drone assaults also led to concerns about the global oil supply and what will likely be an increase in tensions in the region.

Drones not likely launched in Yemen

Hilal Khashan, who teaches political science at the American University of Beirut, told VOA that he suspects the drones may not have been launched from inside Yemen because the Houthis don’t have drones capable of flying as far as Saudi Arabia’s eastern province. Khashan does believe, however, that forces inside the kingdom helped guide the attacks.

“There is no doubt that in order for the Houthis to land the drone on the target they need coordinates and they need someone on the ground to guide them in determining the coordinates. It sounds plausible to me that they have support on the ground in the Eastern Province,” Khashan said.

There has been some speculation that alleged Houthi drone attacks on the Saudi Yanbu pipeline last May were launched from Iraq, which is much closer to the target than Yemen. That attack damaged two oil pumping stations along the largest Saudi cross-country oil pipeline.

Saturday’s attack comes as the Saudi oil giant Aramco prepares to publicly sell shares of the company, leading some analysts to speculate the attacks were meant to depress the value of the company when its shares go on the market.

Several analysts on Saudi-owned al-Arabiya TV accused Iran of perpetrating Saturday’s drone attacks from bases operated by its Revolutionary Guard and local Shiite proxies from inside Iraq. VOA could not confirm the claims.