On the ground at Vibrant Response 13 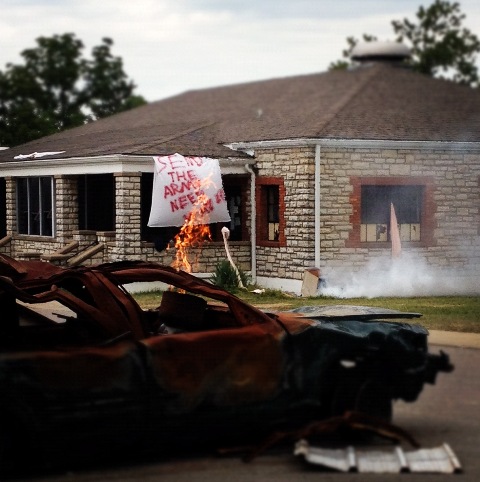 Charred hulks of buildings lie smoldering in this once-proud American metropolis, while dazed victims wander the streets aimlessly in search of food, water, and their missing loved ones.  Meanwhile, rescue workers clear the city streets block by block, pulling victims from the rubble.  Others still try to calm unruly mobs

Over 9,000 people--including US military forces, along with Federal, State, and local responders--participated in an extensive training exercise spanning the entire state of Indiana.  Known as "Vibrant Response", the exercise tests the Defense Department's Chemical, Biological, Radiological, and Nuclear Response Enterprise (CRE).  The scenario begins with the notional detonation of a 10-kiloton nuclear weapon--three-fifths the power of the "Little Boy" bomb--in a major metropolitan area.  Responders from all levels of government must cooperate to provide a timely response, as prescribed in the National Response Framework.

Major disasters can often cause a chain reaction, resulting in complex catastrophes.  Just witness the 2011 earthquake off the coast of Japan, which spawned a massive tsunami, which in turn caused nuclear meltdowns at Fukushima.  It was the same with the fictitious nuclear detonation during Vibrant Response, which forced responders to react to riots, public health hazards, fires, and industrial accidents.

Though many consider a domestic nuclear explosion unlikely, the skills honed during Vibrant Response pay huge dividends during other major disasters.  One can't help but look at the landscape at MUTC and not see similar environments in the wake of Hurricane Katrina, the Fukushima disaster, or the 2010 earthquake in Haiti.  Had the scenario not specifically mentioned a nuclear detonation, the scene could have just as easily been Los Angeles after an earthquake, or the Midwest following a tornado.

The Muscatatuck Urban Training Center portrayed a suburban area, several kilometers upwind of the explosion.  Though this suburb experienced little in the way of nuclear fallout, the residents had still undergone a massive blast wave which leveled buildings, overturned cars, and littered the streets with debris.

There's little imagination required at MUTC--the cadre took painstaking efforts to strew debris across the urban training area.  With the help of pyrotechnics, smoke generators, and an army of role-players, the men and women of the Defense CBRN Response Force (DCRF) have to constantly remind themselves that they're not in the midst of a zombie apocalypse.

(The analogy to the Zombie Apocalypse is entirely warranted--Max Brooks, author of "World War Z: An Oral History of the Zombie War", paid a visit to MUTC during Vibrant Response.)

MUTC sits near the agricultural campus of Purdue University, and features a number of buildings--residences, steam rooms, high-rise buildings, parking decks, neighborhoods, trailer parks, and schools.  As MUTC is a training venue for urban environments ranging from Chicago to Kabul, participants may find flooded subdivisions--as we saw in Hurricane Katrina--located a few hundred meters from a rural Afghan mosque.  Yet, for its size, there is no finer urban training venue available in the world.

After donning an Observer/Controller's vest, Jeff Chase, one of the exercise controllers, takes me for a driving tour of the training area.

Our first stop is a casualty collection point, manned by the 102nd Forward Surgical Team (FST) from Joint Base Lewis-McChord.  Survivors of the blast filter through, some with minor injuries, others requiring major surgery.  The surgical team sets up shop in massive, air-conditioned tents within a few hours after arriving at MUTC.  Over the course of a few days, the FST provides Level 1 trauma care to hundreds of patients.  Casualties requiring more critical care are quickly shuttled by ground ambulance to a local hospital, or shuttled to a helicopter landing zone for evacuation aboard US Army UH-60 Black Hawk helicopters.

The casualty collection point doesn't just accept humans, either.  During modern disasters, animals pose a unique challenge: pets are important parts of our families, while livestock provides millions of Americans with their livelihoods each year.  Thankfully, the Forward Surgical Team includes a detachment of eight veterinarians.  Jeff Chase and I follow their convoy from the casualty collection point to a makeshift farm on the outskirts of MUTC's "residential" section.

MUTC is home to donkeys, camels, sheep, and even alpacas, which are out in full force when MUTC replicates rural areas, like Afghanistan.  Though it's true that alpacas aren't native to the United States, large livestock farms could be affected by a catastrophic event, as could local zoos.  (The Audubon Zoo in New Orleans survived Hurricane Katrina with miraculously little damage).

Today, veterinarians attached to the 102nd FST scan the animals for radiation, while listening to the concerns of their keepers.  Fortunately, all seems well at the "zoo"; Jeff and I head off to the Incident Command Post.

The command post looks like any other field-expedient military command post, with a slight difference.  As I look at the myriad of computer screens, (what we call the Common Operating Picture, or "COP"), I notice that the local Incident Commander is running his entire command post on Macintosh computers, using open-source Google software for mapping.

As US troops learned during Hurricane Katrina, and again during disaster relief in Haiti, relief workers simply don't have access to the same information systems as the military.  The US military simply cannot share information with the Red Cross over CPOF, CIDNE, DCGS, Palantir, or Blue-Force Tracker.  This can become confusing in a crisis, when seconds count.  Instead, government and non-governmental agencies prefer to collaborate over open-source systems such as Google Earth and Google Documents.

(Best of all, Google Earth is free)

In another sign of the times, Vibrant Response even simulates the effects of social media, in addition to traditional sources.   Through a program known as "Simulation Deck", Vibrant Response replicates the social media reactions from uses on venues such as "Ewetube", "Frogger", and "Bleater".  Participants must monitor each of the venues for blog posts and "Bleeps", responding to critical questions, and disseminating valuable emergency information.

Vibrant Response is not just the largest annual exercise devoted to Chemical, Biological, Radiological, and Nuclear response; it's also the largest one to train US service members to provide Defense Support of Civil Authorities.

The Defense CBRN Response Force (DCRF) consists of units tailored for the CBRN mission--aviation, logistics, operations, and medical support.  However, these units are also worth their weight in gold during a massive catastrophe, such as Hurricane Katrina in 2005.

The lessons learned while integrating with other government agencies will apply to nearly every civil disaster in which federal troops are involved, and perhaps that is the greatest takeaway from Vibrant Response.  We can be almost certain that a major catastrophe--be it natural or man-made--will strike the American homeland in the years to come.  When that day comes, the time, effort, and money spent preparing for the unthinkable disaster will pay huge dividends.

We owe the American people nothing less.

I could tell right away that the U.S. Army people pictured were the genuine article because they were all wearing reflective belts, all worn over the same shoulder too.

First Responders amongst others may appreciate Post 45 on the Oslo Attacks thread, which has a link to the lessons learnt by the Norway and the link: http://council.smallwarsjournal.com/showthread.php?t=13830

There is a similar post written by a US team after a visit to Mumbai, Post 103 refers and link: http://council.smallwarsjournal.com/showthread.php?t=6345

One question. Does the exercise run continuously for days or just during daylight hours? Sometimes similar UK exercises seem to forget nightfall.

I'm going to push back a bit, b/c I think Gian (and those junior O's) had it right in the first place.

Given that the military performed well in no-prep deployments to Haiti and New Orleans, what do you think are the specific tasks that platoons, companies, and battalions are missing?

I agree with you National Incident Management System (NIMS) and Incident Command System (ICS). But, from a ground commanders perspective, those are simply constraints that brigade and division will translate into ROE, SOPs,and reporting processes on the ground.

So, in my mind, the only training and coordination needed would be on the staff levels.

For the line, they know how to secure, recon, attack and defend. All they need is their right and left limits.

Fair points, and i did not mean to convey the idea that just because somebody like me who has responded to mass casualty attacks in Baghdad in 2006 is automatically an expert at domestic crises, sorry if I did. Of course there are significant differences, and those difference require the kind of expertise and education that you spell out in your post. I only meant to convey the idea that we have some experience in these situations, and i think i used the word "immediate" in my post to convey the idea that there are some experiential transfers in terms of an "immediate" response. for example, because i have seen mass casualty attacks, with dead and mangled bodies strewn all over the place, that experience might offer up at least a reaction to a domestic crisis that is less traumatic simply because i have seen these things before. But beyond that immediate experience you are right, the kinds of expertise needed in terms of extened operations are not embedded in the US army and marines simply because we have done tours in Iraq and Afghanistan.

thanks for the clarification
gian

While the expertise acquired in theater gives our troops "Real world experience" in responding in a hostile combat environment, it does not give them the tools necessary to respond to a CONUS or even to a OCONUS All Hazards Incident, up to a point.

As someone who is intimately involved in both Antiterrorism, Emergency Management and CBRNE response in an non-hostile OCONUS AOR, with in-depth experience in more than a few hostile AORs, I run across this false assumption from both field grade and company grade officers fresh out of Afghanistan from time-to-time, claiming they are capable of handling ANY incident that may arise due to their combat experience.

It basically comes down to educating everyone who has the potential for responding to, or participating in an All Hazards incident, in NIMS/ICS and making it centric to their military structure in order for it to make sense to them and get their buy in.

As for the U.S. military responding in the civilian sector...I am against it. Not their job. There are more than enough civilian responders out there who are more experienced and trained than the military. If the military has some unique skill that they can impart to civilians, then go for it...on-base.

excellent post, thanks for bringing it to SWJ community's attention.

I would also add that it has not just been from domestic disasters that our military has learned from but also a decade of wars in Iraq and Afghanistan. Although different in many ways, experiencing and dealing with the effect of a mass casualty attack in Baghdad (or other places in iraq and Afghanistan) gives us a real-life, immediate first responder base of experience too.

I imagine that some of the good folks who planned and executed this important training have had those very experiences.