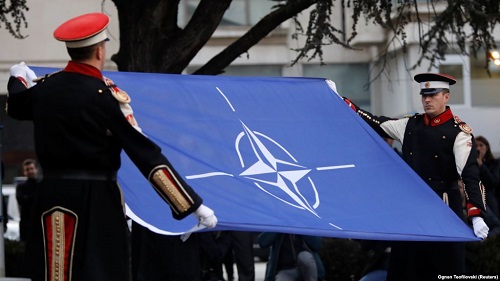 North Macedonia became NATO's newest member with the presentation of its "instrument of accession" to the U.S. State Department in Washington D.C., NATO said in a statement from its headquarters in Brussels.

North Macedonia was granted a protocol on accession to NATO membership in February 2019 after a 2017 agreement with Greece that changed the former Yugoslav republic's name from Macedonia, resolving a decades-long dispute between Skopje and Athens.

Since then, all NATO-member parliaments have voted to ratify the country's membership, and Macedonian President Stevo Pendarovski on March 20 signed the final accession document for the country's entry into the alliance.

"North Macedonia is now part of the NATO family, a family of 30 nations and almost 1 billion people. A family based on the certainty that, no matter what challenges we face, we are all stronger and safer together," NATO Secretary-General Jens Stoltenberg said.

Pendarovski said his country could not appropriately mark the event given the current coronavirus pandemic.

"But this is a historic success that after three decades of independence finally confirms Macedonian security and guarantees our future," he said. "Congratulations to all of you! We deserve it!"

It also reaffirms that NATO's door remains open "to those countries willing and able to make the reforms necessary to meet NATO's high standards, and to accept the responsibilities as well as benefits of membership," Pompeo added.

North Macedonia's flag is to be raised alongside those of the other 29 member states at NATO headquarters in Brussels and at two other commands simultaneously on March 30.

After resolving its name dispute with its neighbor, Greece has also agreed to drop objections to North Macedonia's eventual European Union membership.

The country came closer to joining the bloc on March 26 when EU leaders gave it the green light to begin membership talks.