Who: US Border Patrol Agents find a Mexican cartel (assumed) weapons cache and turn it over to the Bureau of Alcohol, Tobacco Firearms and Explosives (BATF) for further investigation. Border Patrol Chief Rosendo Hinojosa made comments to the media pertaining to the incident.

What: Black bag found in the brush containing:

• 1 Lower Receiver for an Assault Rifle

Where:  Near Fronton, Texas, North of the Rio Grande River on US soil. Mexican city reference: Roughly between Nuevo Laredo and Reynosa.

Why:  The weapons cache was either left in the brush near the Rio Grande for pick up or abandoned due to US LE presence in the vicinity. One assumption is that the weapons were meant for a cartel kill-team/enforcers operating in the region; another is that they were on their way to Mexico. 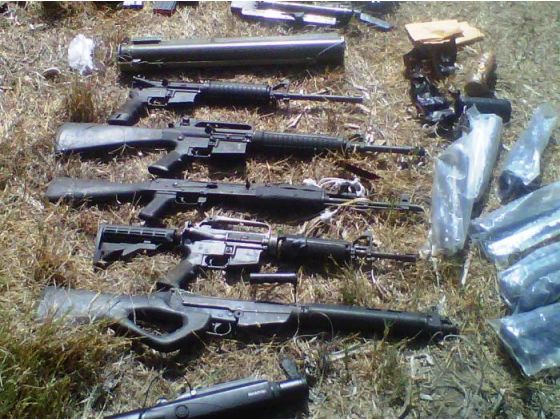 Photo: Courtesy of US Customs and Border Protection (For Public Release)

General ID information only due to the angle and resolution of the picture.

Top Weapon: An enhancement of the sling ring and end cap shows that it is an M-72 Light Anti-tank Weapon (LAW), possibly an A2 model.

2nd Weapon: Either an AR-15 or an M-16 (selector on opposite side) that appears to be a “parts” weapon. It is not in fireable condition as the recoil spring and recoil spring housing are missing along with the stock.

3rd Weapon: Appears in all respects to be an AR-10 (7.62mm x 51mm).  The verified size of the magazine well is consistent with that of a 7.62mm magazine and the slight forward cant of the well is germane to the AR-10 only.  Additionally, the enlarged head on the take-down pin on the receiver of this Armalite is not common to other AR models, but does occur on the AR-10; and the size and format of the brass deflector on this weapon only occurs on the AR-10. There is also no forward assist on the receiver. Production time period and exact model variance from the angle of view is uncertain.

4th Weapon: An AK action in a polymer stock; possibly a knock-off that was originally semi-auto possibly converted to full.

5th Weapon: Weapon with the well-worn receiver appears to be a select-fire M-4 carbine.

6th Weapon: appears to be a Model SAR-4800 Sporter Rifle in 7.62 x 51mm.  The pistol grip on the stock has been trimmed way down to fit a smaller hand.  The barrel has also been cut off just ahead of the gas piston adjustment for maneuverability.

7th Weapon (Partial): No ID due to partial image.

Tactical Analysis: Mexican cartel weapon caches containing military grade weaponry have been regularly found throughout Mexico and even close to the US-Mexican border. This specific cache was found on US soil and contained a rocket launcher (M72 LAW), a grenade launcher (type not identified), and C-4 explosives in addition to assault rifles. Of significance is that an earlier weapons cache was also discovered in this same area by US Border Patrol personnel (assigned to the Rio Grande City Station) on Wednesday 16 March 2011. During that incident a suspicious pickup truck was viewed and when personnel searched the area where it had stopped they found a large duffle bag hidden in the brush. The bag contained:

These weapons were also turned over to the BATF for further investigation. Photo: Courtesy of US Customs and Border Protection (For Public Release)

Initial analysis suggests that cartel operatives for whatever reason, likely Zetas or Gulf cartel personnel given the location of the find, are now bringing heavier infantry weapons into the United States. That analysis, however, is in variance with earlier statements made by Chief Hinojosa who said the weapons in the March seizure were being smuggled into Mexico. In that case military grade weapons such as the 40mm Grenade Launcher (presumably stolen and then resold) are loose in the US and are being sent to Mexico. In either scenario the rocket and grenade launcher seized in September 2011 (and the grenade launcher seized earlier) pose a significant US officer safety threat as does the C-4 which can be utilized in an improvised explosive device (IED) role.