Since 2008, there have been 80 caltrop incidents, where cartel operatives throw tire-deflation spikes at the vehicles of law enforcement officers in order to evade arrest.

The 82nd Legislature prohibited the use of caltrops. Using a caltrop or other tire deflation device against an officer while the actor is in flight is now a third degree felony.

…State Rep. Aaron Pena crafted the caltrop ban at the behest of the U.S. Border Patrol, whose tires have borne the caltrops’ trademark slashes.

“There’s a portion of my district which goes right up to the border, the (Rio Grande) river,” Pena said. “And caltrops are used there probably more than any other location in the United States.”

Almost all reported cases of caltrop use can be found in a 20-mile stretch of the border west of McAllen, Texas, authorities said.

“The first time we were exposed to this was 2008 when we had one incident,” said Rosendo Hinojosa, chief of the Border Patrol’s Rio Grande Valley Sector. In 2009, there were 12 incidents, with 13 last year…

What:  Use of caltops—tetrahedra-like and sea urchin shaped metal devices with sharp tips— used to deflate the tires of pursuing police vehicles. The devices deployed are improvised and created by welding large nails together. While other variants exist—such as cut and bended sheet metal and specifically manufactured caltrops (with hollow spikes and a central air vent to maximize tire deflation)—only improvised caltrops can be identified in the photos released by law enforcement and published by the media.

Why:  Primarily to degrade and terminate the police pursuit of fleeing cartel operatives. See other applications in the tactical analysis. 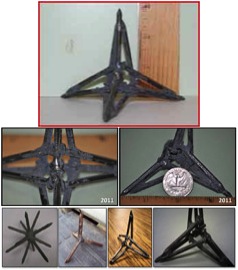 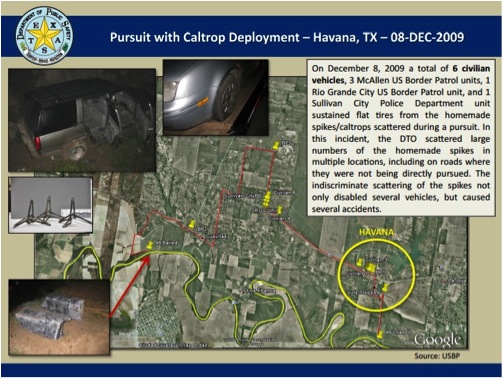 Texas Department of Public Safety [No Restrictions on Use] [4] 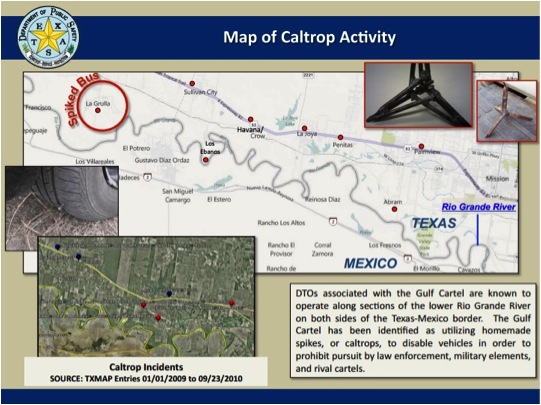 Texas Department of Public Safety [No Restrictions on Use] [4]

General Analysis: Searches were conducted for cartel use of anti-vehicular caltrops in the other Southern border states of New Mexico, Arizona, and California with no incidents or seizures of these devices reported. However, the employment of spiked stakes, individual nails, and nail boards—much like caltrops— have been used in an anti-personnel mode in marijuana grows in California and many other states by cartel operatives. The last reported use of caltrops by the cartels in Texas appears to have taken place in Sullivan City in March 2011 with 20 to 30 cars suffering punctured tires [6]. These devices were made illegal to possess in Texas in September 2011 as a response to the eighty instances of their usage by the cartels in that state since 2008 [7]:

…(17) “Tire deflation device” means a device, including a caltrop or spike strip, that, when driven over, impedes or stops the movement of a wheeled vehicle by puncturing one or more of the vehicle’s tires.  The term does not include a traffic control device that:

(A)is designed to puncture one or more of a vehicle's tires when driven over in a specific direction; and

In Mexico, the most recent reports of caltrop usage are in Reynosa in February 2012 [3][5] and again in August 2012 [3]. Their deployment was combined with other cartel TTPs (tactics, techniques and procedures) during running gun battles and other cartel tactical actions.

Tactical Analysis:  Caltrops are very old weapons that can be traced back to use by Greek and Roman troops. During the Middle Ages, they were deployed against heavy cavalry forces to serve as a hasty open battlefield barrier, for area denial, and from an ‘anti-vehicular perspective’ to cause damage to the hoofs of cavalry horses. Besides a long pedigree in such combat operations, and sporadically employed for anti-personnel purposes in more modern conflicts, they have also been more recently utilized by U.S. law enforcement in their modified form as ‘spike strips’ to create a barrier across a roadway which if crossed will flatten the tires of a fleeing vehicle containing criminals being pursued by law enforcement.

Additional capabilities are to mimic law enforcement ‘spike strips’ in order to create a roadway barrier to deny an opposing force an avenue of approach.  This would also be considered an ‘area denial’ capability and would be synergistic with the cartel Narcobloqueos (narco-blockades) which have appeared in Southern Texas such as in November 2012 [2]. Besides keeping a force from using an avenue of approach or entering an area, the reverse is also true with a target group of some sort being kept in an area—such as, at least theoretically, in an ambush or killing zone. While these additional capabilities provided by caltrop deployment exist and have been used in cartel operations in Mexico, they have not been documented taking place in Texas in either open media or law enforcement public information reports [3].

[3] In Mexico spike strips are known as “ponchallantas” and have been used by the cartels. See Chivis, “Shootouts and Narcoblockades in Reynosa: Reports ‘El Gringo’ is Dead.” Borderland Beat, Tuesday 14 August 2012, http://www.borderlandbeat.com/2012/08/shootouts-and-narcoblockades-in-reynosa.html. Caltrop usage in parts of Mexico is also quite common with photos of  captured Los Zetas and Cartel Del Golfo personnel with these devices present. The number of devices in these photos has ranged from about half-a-dozen to about four dozen caltrops. For a social media example of some of these devices found in Mexico see, http://menytimes.blogspot.com/2012/09/ponchallantas-varios.html.

[4] Spillover Crime and Cartel Operations, Texas Department of Public Safety, nd [No Restrictions on Use], http://www.senate.state.tx.us/75r/senate/members/dist4/pr11/p032411b.pdf.