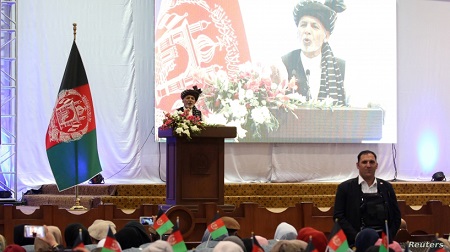 Afghan President Ashraf Ghani told an election rally Friday that more than 2,000 Taliban fighters have been killed over the past week and insisted his elected office is where the insurgent group must come to seek a decisive political settlement to the conflict.

Ghani’s assertions came nearly a week after U.S. President Donald Trump abruptly ended yearlong direct negotiations with the Taliban over the future of American troop presence in Afghanistan. That dialogue process had excluded the Afghan government because of insurgent opposition.

Trump defended his move, citing a recent Taliban car bombing in the Afghan capital that killed 12 people, including an American soldier, and he vowed to intensify military operations against the insurgents.

Ghani did not share details of the estimated 2,000 insurgent casualties he revealed in the public meeting. It was not clear whether the figures were inclusive of the more than 1,000 Taliban deaths the United States said last week it had inflicted on the insurgents in battles over the past 10 days.

The Taliban has rejected the claims made by both Ghani and U.S. officials, though, saying their adversaries have never inflicted heavy losses of this magnitude, nor do they have the capacity to do so.

“Had they been capable of inflicting such heavy casualties on us, the foreign invasion [of Afghanistan] would have succeeded and the jihad [Taliban insurgency] would have ended by now,” Taliban spokesman Zabihullah told VOA.

Mujahid asserted Trump is sitting in Washington and “it is quite possible his generals are feeding him with false information to cover up their failures in Afghanistan.”

Instead, the Taliban spokesman insisted its fighters have made battlefield gains and inflicted heavy casualties on Afghan forces as well as their foreign partners. Mujahid claimed Taliban forces seized control of eight districts in different parts of the country over the past week.

It was not possible to ascertain the veracity of claims made by either side, and both frequently issue inflated battlefield figures.

The U.S.-led peace dialogue with the Taliban, which Trump suspended last week, presumably would have eventually led to intra-Afghan talks between the insurgents and a widely representative Afghan delegation, in which government officials would have participated only in their personal capacities, to discuss a cessation of hostilities and the political future of Afghanistan.

Throughout their negotiations with American interlocutors, the Taliban had maintained they would not talk to the Ghani government, denouncing it as an American puppet.

Ghani, who evidently is emboldened by Trump’s cancellation of talks with the Taliban, has hardened his stance for engaging in future talks with the rebels, saying negotiations will be “impossible” until the insurgents declare a cease-fire.

Afghanistan’s ambassador to the U.S., Roya Rahmani, echoed that sentiment during a short speech Friday in Washington.

"It's impossible to begin the process of rebuilding trust under these conditions," she told an audience at the U.S. Institute for Peace.

"We know peace is on the horizon," she added, cautioning, "We also know it will come on our terms."

The incumbent president is seeking another five-year term in the September 28 presidential elections. During campaign rallies in recent days, Ghani, who is one of the favorite candidates, is now increasingly projecting tough conditions for possible future engagement with the insurgent group.

The fate of the Afghan presidential election is up in the air in the wake of the stalled U.S.-Taliban negotiations. But the vote is back in the spotlight after Trump’s suspension of talks with the Taliban.

While the peace process in Afghanistan now faces an uncertain future and dozens of people continue to die every day across the country, the Taliban has threatened violent attacks against organizers and security forces in its bid to disrupt the democratic process, raising fears of more bloodshed in the days ahead.

Afghan election officials have said about 2,000 of the country’s 7,000 polling centers will remain closed on the polling day because of security concerns in those areas. The Taliban controls or hotly contests nearly half of the 407 Afghan districts, mostly in rural parts of the country.