The US Army Peacekeeping and Stability Operations Institute (PKSOI) has released a two-volume collection on lessons learned for Defense Support to Stabilization or activities related to logistical support, supplies, and servicfes for federal agencies involved in stabilization activities. The Global Fragility Act of 2019 outlined a US strategy to prevent conflict and promote stability in countries identified by the Department of State in partnership with other federal agencies. Among those agencies is the Department of Defense (DOD) with its relatively new interagency support authority, the Defense Support to Stabilization, or DSS. This new authority allows DOD to provide logistical support, supplies and services to other federal agencies so that critical civilian expertise can be in place quickly and efficiently for a unity of effort that the interagency may have lacked in the past. 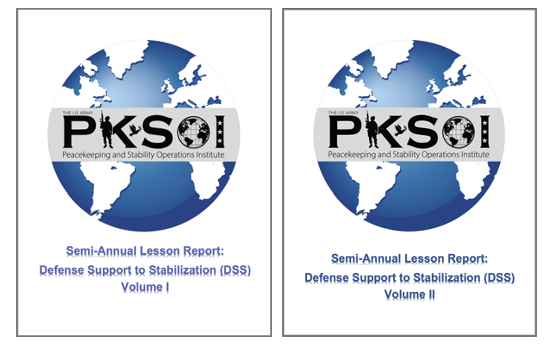 To read these Semi-Annual Lesson Reports: Defense Support to Stabilization (DSS), click on the links below:

This Review Essay of Lise Morjé Howard's "Power in Peacekeeping" looks at Power, Persuasion, and Inducement in Peacekeeping through the lens of US doctrine: both US Army FM 3-0: Operations and the Joint Multi-service Tactics, Techniques, and Procedures (MTTP) for Peace Operations.

Irregular Warfare Podcast: From SAR to GFA: The ABCs of Conflict Prevention and Stabilization

An interview with Dr. Frances Brown, currently with the Carnegie Endowment for International Peace, and Pat Antonietti, the director for stabilization and peacekeeping operations policy in the Office of the Secretary Defense-Policy.

This episode examines how the SAR and the GFA have fundamentally reshaped the way the US government conceives and responds to conflict around the world based on lessons learned from places like Afghanistan and Iraq. One of the SAR’s most important contributions when it was released in 2018 was the establishment of a common interagency-wide definition of stabilization. To wit, “a political endeavor to create the conditions where locally legitimate authorities and systems can peaceably manage conflict.” Meanwhile the GFA codified many of the principles articulated in the SAR into law and appropriated specific money to pilot evidence-based approaches to conflict prevention and stabilization. But as our guests argue, the impact of these initiatives is not only felt in terms of how we approach conflict, but also supports other policy priorities like great power competition with China.

Dr. Frances Brown is a senior fellow and codirector of the Carnegie Endowment for International Peace’s Democracy, Conflict, and Governance Program. She previously served as director for democracy and fragile states on the White House National Security Council staff and managed stabilization and political transition programs in Afghanistan, the Middle East, and Africa for the US Agency for International Development’s Office of Transition Initiatives.

Pat Antonietti is the director for stabilization and peacekeeping operations policy in the Office of the Secretary Defense-Policy. Previously in OSD-Policy, Antonietti served as director for domestic counterterrorism, director for Middle East policy, and country director for Iraq. He is a retired Army officer, having served in multiple field artillery units in Germany, Kosovo, and Iraq, as well as serving as one of the first political-military planners for Afghanistan on the Joint Chiefs of Staff J5 after 9/11.

Where Public Health and Peacebuilding Converge

Assessment of U.S. Strategic Goals Through Peacekeeping Operations in the 1982 Lebanon Intervention

The United States’ intervention in the Lebanese Civil War was a peacekeeping operation defined by long term strategic goals centered around increasing American hegemony in the region. The United States sought to leverage its position as a peacekeeper against Israeli and Syrian advances. However, significant overreach and unplanned events would play a substantial role in limiting the extent of American success in Lebanon.

On the Recommendation to Shut Down the Army's Peacekeeping and Stability Operations Institute SWJED Mon, 01/07/2019 - 10:12am
November 29, 2018 letter from Howard R. Lind, President and Executive Director, International Stability Operations Association, to Secretary of the Army Mark Esper concerning the recent recommendation to shut down the Peacekeeping and Stability Operations Institute. Continue on for the letter.
In Case of Emergency - Don’t Panic, Plan SWJED Fri, 11/16/2018 - 6:18am
If we want to increase the chances of our missions succeeding, we must first understand the complexity of what we are dealing with and plan accordingly. Moreover, we need to treat planning not as a one-time activity but as an ongoing, iterative affair that is responsive to the continual and multifaceted changes characteristic of complex crises.

This article is a continuation of the research published in the author's previous paper, ‘United Nations Peacekeeping Offensive Operations: Theory and Doctrine’.

Military planning can incorporate gender related factors to promote peacebuilding and mitigate the effects of conflict and can be applied to ongoing operations or in post-conflict situations.

The point of departure of this paper is that the UN has not defined offensive operations, and specified what this means in practice.