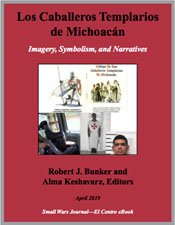 This is a temporary list, pending the launch of our revised Library section.

These books may be of interest to you. They are broken out by English & Spanish.

Mexico: Narco-Violence and a Failed State?  by George W. Grayson

Narcos Over the Border: Gangs, Cartels and Mercenaries edited by Robert J. Bunker

The Transformation of War: The Most Radical Reinterpretation of Armed Conflict Since Clausewitz by Martin van Creveld

The Last Narco: Inside the Hunt for El Chapo, the World's Most-Wanted Drug Lord by Malcolm Beith

The Bullet or the Bribe: Taking Down Colombia's Cali Drug Cartel by Ronald Chepesiuk

Killing Pablo: The Hunt for the World's Greatest Outlaw by Mark Bowden

The Accountant's Story: Inside the Violent World of the Medellín Cartel by Roberto Escobar

Drugs and Conflict in Colombia: A Policy Analysis of Plan Colombia by Charles Preston

Megacities: The Politics of Urban Exclusion and Violence in the Global South edited by Kees Konnings and Dirk Kruijt

Smoke and Mirrors: The War on Drugs and the Politics of Failure by Dan Baum

Colombia and the United States: War, Unrest, and Destabilization by Mario A. Murillo

Illicit Flows and Criminal Things: States, Borders, and the Other Side of Globalization edited by Willem van Schendel and Itty Abraham

Illicit: How Smugglers, Traffickers, and Copycats are Hijacking the Global Economy by Moises Naim

Policing the Globe: Criminalization and Crime Control in International Relations by Peter Andreas  and Ethan Nadelmann

McMafia: A Journey Through the Global Criminal Underworld by Misha Glenny

Global Outlaws: Crime, Money, and Power in the Contemporary World by Carolyn Nordstrom

Networks and Netwars: The Future of Terror, Crime, and Militancy by John Arquilla and David Ronfeldt

Insurgency, Terrorism, and Crime: Shadows from the Past and Portents for the Future by Max G. Manwaring

Planet of Slums by Mike Davis

The Gangs of Los Angeles by William Dunn

This Is for the Mara Salvatrucha: Inside the MS-13, America's Most Violent Gang by Samuel Logan

Shooting Up: Counterinsurgency and the War on Drugs by Vanda Felbab-Brown

The Border: Exploring the U.S.-Mexican Divide by David Danelo

Amexica: War Along the Borderline by Ed Vulliamy

Narcocorrido: A Journey into the Music of Drugs, Guns, and Guerrillas by Elijah Wald

The Reaper's Line: Life and Death on the Mexican Border by Lee Morgan III

The Killing Fields: Harvest of Women by Diana Washington Valdez

The Daughters of Juarez: A True Story of Serial Murder South of the Border by Teresa Rodriguez et al.

Drug War Zone: Frontline Dispatches from the Streets of El Paso and Juárez by Howard Campbell

Across the Border: True Story of Satanic Cult Killings in Matamoros, Mexico by Gary Provost

Folk Saints of the Borderlands: Victims, Bandits, and Healers by James S. Griffith

The Mexican Mafia by Tony Rafael

Urban Street Terrorism : A Study Guide About the Violent Prison and Street Gang Subcultures of The Mexican Mafia and Its Army of Soldiers: Los Sureños by Rene Enriquez and Al Valdez

The Black Hand: The Story of Rene "Boxer" Enriquez and His Life in the Mexican Mafia by Chris Blatchford