Soufan Center: Fighting in the Shadows: Israel and Iran

C/O Futures’ new special report The Mohsen Fakhrizadeh Assassination Operation provides a detailed forensic assessment of the assassination of the man who was modern-day Iran’s equivalent of Robert Oppenheimer, director of the US laboratory that created the first atomic bomb. The report dispels the Iranian regime’s propaganda efforts, false narratives, and wild claims concerning the events surrounding this assassination operation. It provides the definitive and most accurate analysis produced related to this controversial incident with its basis in non-biased facts and data. 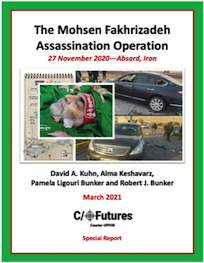 From the Introduction: “The intent of the report is to forensically ‘identify the truth’—or as much of the truth that can be revealed—concerning the actual tactical action that occurred derived from the incident scene imagery that exists.”

The new 69-page special report produced by C/O Futures, LLC entitled The Mohsen Fakhrizadeh Assassination Operation: 27 November 2020—Absard, Iran provides a detailed and accurate forensic analysis pieced together from the relevant imagery of the incident scene where the Iranian General and Senior Nuclear Scientist was assassinated while driving his vehicle on a road in Absard, Iran. The report was primarily authored by David A. Kuhn, who provided its detailed forensic analysis section, supported by the research and writing team of Alma Keshavarz, Pamela Ligouri Bunker, and Robert J. Bunker, who further placed the incident in context, provided a short biography related to Fakhrizadeh, discussed the competing theories and narratives surrounding the assassination, provided Farsi language translation, and obtained the initial incident scene imagery from Iranian social media and Iranian State news linked sources.

Understanding how and why Iran uses proxy forces throughout the Middle East is vitally important for policymakers, military strategists, and operators. The lessons in this volume are not isolated to U.S. approaches toward Iranian use of proxies but have broader implications in great power competition. Russia and China have their own versions of proxies that also seek to compete with the U.S. short of armed conflict. Zorri, Sadri, and Ellis have provided the special operations community with a roadmap to responding to such activities when so many are struggling to find a solution.

The political bloc of Oman, Qatar, and Iran is working together to legitimize Houthis politically and to facilitate Houthi leadership travel to Iran, as well as training for the fighters. All of that serves to benefit Iran's agenda in the region and undermines the GCC even as GCC was created to counter jointly Iran's security threats to the Gulf Arab states in the 1980s.

“To Oppress the Free”: The Iranian Basij and the Dark Side of Unconventional Warfare Doctrine

Iran, since the Islamic Revolution in 1979, has prioritized and dedicated significant resources to protecting the ruling regime from UW threats from within while (leveraging its empirically won UW principles) projecting highly capable UW forces abroad.

Iranians head to the polls on February 21 to elect their next parliament. Following the violent suppression of protests in November and the accidental shooting down of a Ukrainian passenger plane in January, many are deeply disillusioned with Iran’s political system.

Rising tensions between the United States and Iran—illustrated and exacerbated by the January 3 assassination of Iranian General Qassem Soleimani—are rippling out beyond the Middle East. Now, American officials are voicing growing concern about Iranian activities in Afghanistan.

IRGC Threat in the Middle East: How Safe Are Americans in Turkey?

The IRGC and its military wing, the Quds Force, have been two of the top security issues in the Middle East for several years. The Quds Force, for example, is involved in the conflicts in Syria and Yemen, maintains close relationships with terrorist groups in the Middle East and, in 2019, and was designated a terrorist group by the United States. The IRGC, meanwhile, has stepped up its efforts to target Americans and achieved its goal of increasing tensions in the region.

Even if Iran is able to procure modern aerial munitions and fighter jets, perhaps in October of 2020 if Russia sells such systems to Iran, Ayatollah Khamenei likely realizes he will still likely never procure symmetric munitions that will effectively counter Iran’s enemies. The continuing development of the IRGCAF’s offensive drone and cruise missile capabilities, however, give him a limited aerial capability window he and Iran so desperately need.