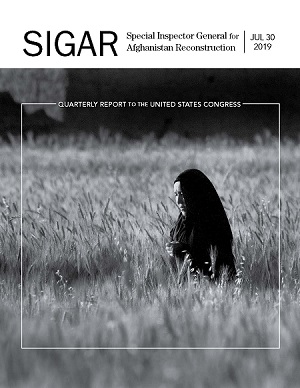 On Thursday, the Special Inspector General for Afghanistan Reconstruction (SIGAR) released its forty-fourth Quarterly Report to Congress.Key Points
-- For the fourth consecutive quarter, ANDSF strength is reported at the lowest level since the Resolute Support mission began in January 2015. This quarter's ANDSF strength decreased by 41,777 personnel since approximately the same period in 2018. According to CSTC-A, the decline was due to ANDSF switching their reporting of personnel strength to the number enrolled in the Afghan Personnel and Pay System (APPS) rather than the number reported on-hand by ANDSF components.-- This quarter's ANDSF assigned strength is 77.4% (79,535 personnel short of its authorized strength), a nearly 10 percentage-point decline from last quarter. -- Resolute Support reported 6,445 enemy-initiated attacks (EIA) this quarter (March 1 - May 31), a 9% increase from the preceding three months (December 1, 2018 - February 28), but a 10% decrease from the same period last year.-- Of the 6,445 EIA reported this quarter, roughly 43% were "effective" enemy-initiated attacks (EEIA) that resulted in ANDSF, Coalition, or civilian casualties. This is a 17% increase compared to the preceding three months (December 1, 2018 - February 28), but a 7% decrease compared to the same period last year.-- ACLED, the Armed Conflict Location & Event Data Project, reported a 66% increase in incidents in Afghanistan this quarter (March 1 - May 31) compared to the same period in 2018. These incidents include violent and nonviolent activity of all parties to the conflict. Violent activity made up 98% of recorded incidents.-- Resolute Support reported this quarter that casualty rates for the ANDSF are the same as they were in the same quarter one year ago.-- SIGAR analysis of Afghan government education enrollment data confirms that no girls were enrolled in grade 12 in 85% of districts in Helmand Province in 2018. -- Girls' education lags across much of southern Afghanistan. All seven provinces where no females were enrolled in at least 50% of districts were located in Afghanistan's South or Southeast regions. Nearly 2.6 million girls are out of school in Afghanistan, according to the Afghan government. -- The United Nations Children's Fund (UNICEF) reported that the number of attacks against schools in Afghanistan tripled in 2018 - to 192, up from 68 in 2017. The report also noted more than 1,000 Afghan schools were closed at the end of 2018 due to ongoing conflict and approximately 500,000 children "were denied their right to education." High levels of school closures continued in 2019.-- According to CSTC-A, the Afghan Ministry of Interior's Criminal Investigative Directorate (MOI CID) has undertaken no investigations or other actions to counter corruption. CSTC-A stated their belief that MOI CID leadership participates in, rather than disrupts, corruption.-- The Afghan government recovers less than 1% (0.2%) of financial penalties issued by the Anti-Corruption Justice Center (ACJC) and struggles to execute warrants and summonses.-- In cases involving prominent figures, the UN says the Afghan criminal justice system "looks like a system promoting impunity." According to the UN, there are numerous incidents when the police failed to make arrests and the AGO failed to issue charges. Further, suspects have been released prior to trial and orders to not leave the country were not enforced.-- According to data from the Department of Defense, nine ANDSF personnel went absent without leave (AWOL) while in the United States between January 1 and July 1. Thirty-nine ANDSF personnel went AWOL in the United States between January and December 2018.Full Report: https://www.sigar.mil/pdf/quarterlyreports/2019-07-30qr.pdfQuarterly Report by Section: https://www.sigar.mil/quarterlyreports/index.aspx?SSR=6

At a recent peace conference in Moscow, Taliban representatives sat in front of the Russian media and gave interviews to a select number of Russian women journalists. It was a message of change when compared to their brutal regime and their repressive policies toward Afghan women. The move was calculated and strategic; it was meant to send a message to the world that they have changed and are no longer a threat to regional and global security.

-- Persistent reports indicating discrepancies between the assigned force strength of the ANDSF and the actual number of personnel serving raise questions regarding whether the U.S. government is taking adequate steps to prevent taxpayer funds from being spent on so-called "ghost" soldiers.

-- Concerns have been raised that the U.S. government has relied on inaccurate data when determining how much it will spend on ANDSF salaries.

-- In 2015, SIGAR reported $300 million in annual, U.S.-funded salary payments to the Afghan National Police were based on only partially verified or reconciled data, and that there was no assurance that personnel and payroll data were accurate.

-- There are continuing reports of significant gaps between the assigned force strength of the ANDSF and the actual number of personnel serving.

-- U.S. Forces- Afghanistan reported that in the quarter ending June 2016 "ANDSF assigned force strength was 319,595 (not including civilians)," however, an Afghan official was reported as indicating that "the best internal estimate put the number around 120,000, less than a third of what is needed to secure the country."

-- The new police chief of Helmand province has been quoted as stating that of the approximately 26,000 ANDSF personnel assigned to the province "40 to 50 percent of the force did not exist physically when we asked for help during operations."

-- DOD outlined actions it was taking to improve the systems used for ANDSF personnel management. However, these systems will only be effective if accurate data is captured and maintained on ANDSF attendance and attrition.

-- Given the persistent reports of absentee or non-existent personnel, my office is concerned about whether adequate steps have been taken to address this issue.