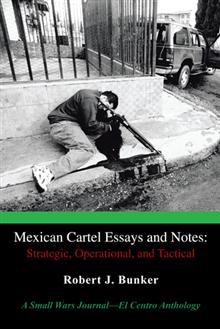 This second Small Wars Journal-El Centro anthology signifies the important debate that this new forum, focusing on the crime wars and criminal insurgencies taking place in Mexico and other regions of the Americas, is helping to generate in U.S. defense and homeland security circles. The debate comes at a time when neither of the two major U.S. presidential candidates were willingly to candidly discuss this issue and at the end of the recent Felipe Calderón administration which saw over 80,000 dead, 20,000 missing, and 200,000 internal refugees stemming from gang and cartel violence during its tenure in Mexico.

Jesus “Chuy” Quintanilla was discovered dead in Mission, Texas, across the border from Reynosa, Tamaulipas.  He was a noted singer of narcocorridos.[1]  Narcomusica (narco-music) plays a key role in shaping the social space of Mexico’s drug war. Narcocorridos are epic folk ballads that extol the merits of the narcos: capos and sicarios alike. Chuy Quintanilla was best known for his narcocorridos:

…depicting the infamous characters and clashes of Mexico’s drug war, and with lyrics that could drop listeners into the thick of a gunbattle, it’d be easy to mistake the singer for a combatant himself.  (Source: [2] The Monitor, 28 April 2013)

Norteño singer Jesus “Chuy” Quintanilla was discovered dead in a pool of his own blood on Thursday, 25 April 2013.  Hidalgo County Sheriff’s deputies responded to the scene.  According to Sheriff Lupe Treviño, Quintanilla had been shot at least twice in the head— the preliminary autopsy report released later stated one shot to the head and one to the neck. While it is too early to determine the motive for the slaying, Quintanilla’s prominent role in narcomúsica and long history of singing narcocorridos make him a prominent figure in Mexico’s narcocultura that shapes the social contours of the drug war.

Jesus “Chuy” Quintanilla appeared to have been shot at least twice in the head and was found near his vehicle, Hidalgo County Sheriff Lupe Trevino said. Irrigation workers found his body on a roadway north of Mission in an isolated area surrounded by citrus groves, Trevino said. (Source: [3]. El Paso Times, 26 April 2013)

Quintanilla who recorded over 40 albums of corridos was known as La Mera Ley del Corrido — The True Law of the Corrido. His nickname is derived from his serving as a Mexican judicial police officer for 20 years prior to his music career.

Quintanilla’s songs covered topics ranging from horse races to cockfights, but the drug war was prominent on his play list. Further, the dress of this individual and his propensity to be posed in his album covers with assault weapons, expensive cars, and beautiful women added to his mystique as a narcocantante. His repertoire included several songs about drug traffickers on the U.S. side of the border.  These include corridos entitled “Tomy Gonzalez,” “El Chusquis” and “El Corrido de Marco,” that commented on alleged drugs dealers in Weslaco and Rio Grande City who coordinated drug trafficking organizations in Texas and the U.S.:

One of Chuy Quintanilla’s most famous songs involves the fierce battle through the streets of Reynosa as Mexican authorities hunted down the Gulf Cartel leader known as Jaime “El Hummer” Gonzalez Duran.

Another top hit, called “Estamos en Guerra,” talks about how the Zetas turned on the Gulf Cartel, which in turn would move to eradicate its former enforcers. (Source: [2] The Monitor, 28 April 2013)

Music is a key element of transmitting alternative cultural values in the ‘narcoscape.’  Narcomúsica (narco-music) is an integral component of cartel influence operations (information operations) and is instrumental is defining (redefining) the persona of the outlaw.  The tradition of narcocorridos builds from the ranchera tradition of folk ballads (corridos) that extol heroic deeds. The narcocorrido variant of traditional corridos has extended its reach from the narco subculture to mainstream audiences throughout Mexico and the United States. Narcocorridos extol the virtues of the drug lord and describe, apotheosize, comment upon and lament the deeds of the narcos, projecting the image of ‘folk hero.’[4]

According to University of Texas, Brownsville Professor Guadalupe Correa-Cabrera, narcocantantes are influential in transmitting narcocultura:

People who sing about these people, drug traffickers are making money from that because there is a captive market and the drug traffickers are going to promote this music,” Correa-Cabrera said. “It promotes, recruits young people presents a life that everyone would like to have and it really serves the purpose of drug trafficking organizations. (Source: [5] Action 4 News, 25 April 2013)

While narcocorridos are popular and bring musical success, they can also bring violent reprisal when the lyrics cross certain gangsters. When the gangsters take exception to the story line, the singers can become targets.  For example, in January 2013, members of the band Kombo Kolombia were found in a mass grave (narcofosa) in Monterrey.  Other narcocantantes killed in cartel-related violence include: Julio Cesar Leyva Beltran of Los Ciclones del Arroyo in Sinaloa

If the investigation determines that Quintanilla was killed because of his narcocorridos it would be the first known assassination of a narcocantante (narco-singer) in the United States.  This would be a significant shift in targeting and the U.S. would be firmly in the operational zone of targeted killings to shape the ‘narcosphere’ or ‘drug war zone.’

Quintanilla was identified with the CDG: Cartel del Golfo (Gulf Cartel) and had dedicated songs to Tony Tormenta (Antonio Ezequiel Cárdenas Guillén)[6] the CDG capo who died with Mexican marines in November 2010 which resulted in a turf battle with Los Zetas in the city of Mier.[7]  One of his songs, “Estamos En Guerra (Los Zetas Vs. CDG),”chronicled the battles following the Gulf-Zeta split.[8],[9]

It is possible that Quintanilla became a target of one or both of those cartels as a result of his characterization of their activities in the current conflict in Tamaulipas.  Certainly both cartels have a presence in Texas and could operate there as seen in recent reports of narcobloqueos (narco-blockades) in Texas.[10]  It is also possible that he crossed other criminal enterprises (such as U.S. gangs) or was targeted for more mundane criminal reasons.  Nevertheless, the modus operandi or tactics, techniques, and procedures (TTPs) involved in his death are consistent with those of narco-assassinations.

Normally, a single murder (narco or otherwise) would possibly at best warrant a tactical note.  This killing, due to the prominence of the victim, his history of singing narcocorridos, and his alleged links with both the CDG and Los Zetas cartels make this an act of strategic significance.  Even if the death is not a cartel-related hit, the information operations dynamics of his murder exude images of narcocultura.

8. For an analysis of the fissure between the CDG and Los Zetas see Samuel Logan and John P. Sullivan, “The Gulf-Zeta Split and the Praetorian Revolt,” ISN Security Watch, ETH Zurich, 7 April 2010 at http://www.isn.ethz.ch/isn/Digital-Library/Articles/Detail/?id=114551.

Knowing Where and How Criminal Organizations Operate Using Web Content

Knowing Where and How Criminal Organizations Operate Using Web Content

We develop a framework that uses Web content to obtain quantitative information about a phenomenon that would otherwise require the operation of large scale, expensive intelligence exercises. Exploiting indexed reliable sources such as online newspapers and blogs, we use unambiguous query terms to characterize a complex evolving phenomena and solve a security policy problem: identifying the areas of operation and modus operandi of criminal organizations, in particular, Mexican drug trafficking organizations over the last two decades. We validate our methodology by comparing information that is known with certainty with the one we extracted using our framework. We show that our framework is able to use information available on the web to efficiently extract implicit knowledge about criminal organizations. In the scenario of Mexican drug trafficking, our findings provide evidence that criminal organizations are more strategic and operate in more differentiated ways than current academic literature thought.