The War on Crime: A Historical Comparative Analysis of Italy and New York

Studies in Gangs and Cartels

Studies in Gangs and Cartels

Concerns over the changing nature of gangs and cartels and their relationships to states in the late 20th and early 21st centuries has resulted in the emergence of a scholarly body of work focused on their national security threat potentials. This body of work, utilizing the third generation gangs and third phase cartel typologies, represents an alternative to traditional gang and organized crime research and one that is increasingly influencing the US defense community. Rather than being viewed only as misguided youth and opportunistic criminals or, in their mature forms, as criminal organizations with no broader social or political agendas, more evolved gangs and cartels, are instead seen as developing political, mercenary, and state-challenging capacities. This evolutionary process has emerged due to the growing illicit economy and other unintended consequences of globalization.

This important anthology of writings by Robert J. Bunker and John P. Sullivan draws upon a collection of their works from the mid-1990s to the present with the addition of new essays written specifically for this publication. The work will be of great interest to academics and students in the fields of political science and criminal justice and to military, law enforcement, and governmental professionals and policy makers.

Studies in Gangs and Cartels at Amazon

Note: This important, yet mostly forgotten, incident from 4 years ago represents a clear ‘firebreak’ in violence potentials for U.S. law enforcement officers vis-à-vis gang and cartel members armed with hand grenades. Such grenades are becoming more and more common in Mexico with thousands seized from the gangs and cartels. Their documented use against police personnel, vehicles, and facilities has occurred numerous times. They represent an increasing ‘officer safety’ concern on this side of the border.

PHOENIX — It was a scenario U.S. law enforcement had long feared: A fragmentation grenade from Mexico's bloody drug war tossed into a public place.

Only the grenade thrower’s bumbling prevented bloodshed in a south Texas bar — he neglected to pull a second safety clasp. But the act was proof that one of the deadliest weapons in Mexico's drug battle is a real threat to the U.S., and investigators are stepping up efforts to make sure it doesn't happen again.

While Mexican drug violence has been spilling across the border in the form of kidnappings and killings, grenades are a particular worry because they can kill large numbers of people indiscriminately, and they are a weapon of choice among Mexican cartel members.

“It’s one thing to shoot someone — that’s a very violent act. But to throw a grenade into a crowded bar or a crowded restaurant, that's a different type of criminal you are dealing with, a different mindset,” said Bill Newell, special agent in charge of the U.S. Bureau of Alcohol, Tobacco, Firearms and Explosives in Arizona and New Mexico…

Markings on weapons match  The grenade that failed to explode in the bar in Pharr, Texas, had the same markings as grenades thrown in October at the U.S. consulate in Monterrey, Mexico, and at a television station in early January in the same city. The grenade thrown at the consulate failed to explode, and no one was injured when the grenade hit the Televisa network’s studio as it aired its nightly newscast.

But all three grenades were manufactured at the same time and place, and were at one point together in the same batch from South Korea. Their manufacture date was unavailable.

The United States and South Korea rank as the top two producers of the grenades seized in Mexico, according to the ATF…

The alleged gang member who threw the South Korean grenade into the Texas bar on Jan. 31 wasn't believed to have been acting on behalf of a cartel. Still, Hidalgo County Sheriff Guadalupe Trevino, whose office investigated the case, suspects there is a loose association between the gang behind the attack and Mexican cartel members. 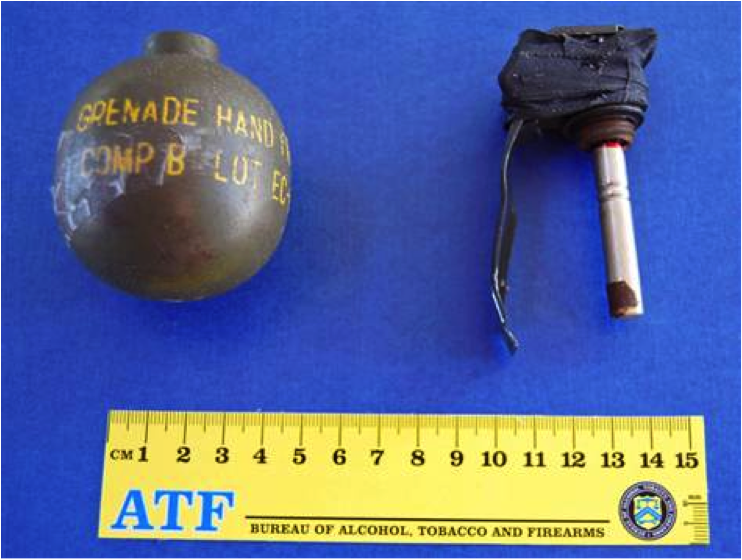 Handout photo provided by the U.S. Department of Alcohol,

Tobacco and Firearms [For Public Distribution]

Who: Gang members, thought to belong to the tri-city bombers, threw the hand grenade. A search warrant was served at 1023 Bell Street, Pharr, Texas with three suspects arrested and several pounds of marijuana and a shotgun seized. [2].

What:  A South Korean K-75 fragmentation grenade (based on the U.S. M67 grenade) was thrown into a bar containing off duty U.S police officers.  An unidentified man who looked in via the front door of the bar threw the grenade inside. The grenade bounced off the floor and landed on a pool table. It fortunately did not explode— a second safety clasp had not been pulled— and it was thrown back out the front door of the bar by one of the off duty police officers. This 2.5 inch spherical 14 ounce grenade produces “casualties by high-velocity projection of fragments” [6]. It has a 4-5 second delay once the fuse is properly activated that detonates 6.5 ounces of Composition B high explosive—“The  effective casualty-producing radius is 15 meters and the killing radius is 5 meters” [6].

Why: Initially, speculation existed that the grenade might have been directed at the off duty U.S. police officers in the bar. Another view is now that “Investigators don’t suspect the Zetas of direct involvement in the attack on the Pharr bar. Instead, they believe members of the Tri-City Bombers gang may have been targeting top leaders of the rival Chicanos gang” [5]. A number of area gangs “…including the Tri-City Bombers, the Texas Chicano Brotherhood, the Texas Syndicate and the Hermanos Pistoleros Latinos…” are said to be violently competing for a spot as the designated South Texas enforcers for the Zetas and ongoing incidents are taking place as they prove themselves worthy [5]. Of the two lines of reasoning, the attack on opposing gang members—rather than upon U.S law enforcement officers—appears to be the more plausible one. 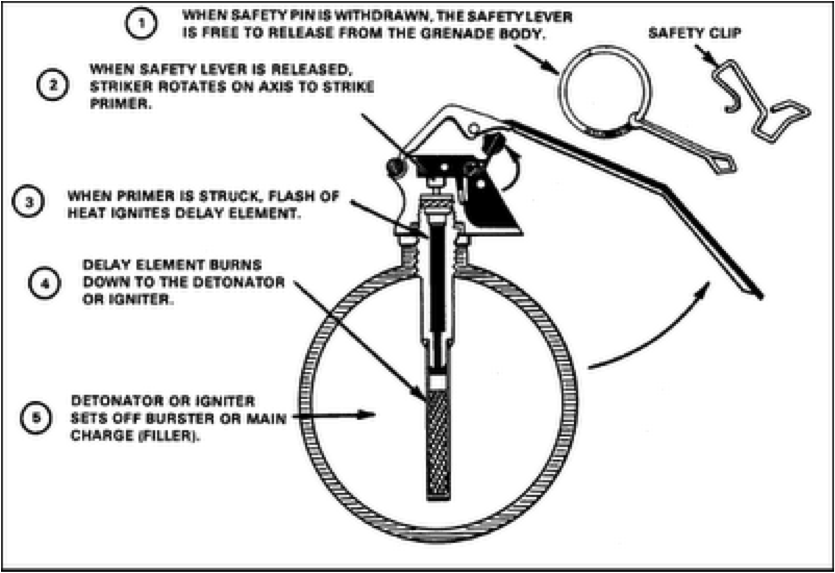 Tactical Analysis: This was a very basic incident— a fragmentation grenade was tossed into a bar— initiated by a gang member untrained in the safety functioning of the grenade. Minimal recon was evident by the perpetrator peering in through the front door of the bar and tossing in the explosive device. Escape and evasion took place by means of running away and or hopping into a get-away vehicle. The criminal act was traced back to the perpetrator within a couple of days so basic OPSEC (operational security) procedures were not likely followed.  This could be attributed to either forensics (via fingerprints or surveillance footage), eyewitness accounts of the fleeing suspect, or ‘word on the street’ from the gang members or their associates bragging about the incident at the bar. The origins of the K-75 South Korean grenade were traced back to a warehouse in Monterrey, Mexico, which contained explosives and high-caliber weapons, which is believed to have belonged to the Zetas—the then paramilitary arm of the Gulf cartel. The grenade was tied to a production lot, via serial number tracing, to two other grenade attacks in Mexico—one against a Televisa news station and one against the U.S consulate in Monterrey [4, 5]. While at that point dozens of grenade attacks had taken place in Mexico, including quite a few across the border in the city of Reynosa, the cross border violence potentials that this attack signified with its tie in to a cartel stockpile of weapons and a U.S. based gang linked to that cartel [the Gulf cartel] is of importance. What is further troubling about this incident is the fact that off duty U.S. law enforcement officers were in a bar late at night that was either frequented by Chicanos gang members or actually contained them at the time of the grenade attack.

[3]. To view the front of the bar, see the photos in this article. “Man throws grenade into bar outside Pharr.” ValleyCentral.com. 2 February 2009, http://www.valleycentral.com/news/story.aspx?list=~%5Cnews%5Clists%5Crecent&id=254235#.UKmmzqX3C9Y.

Many modern internal conflicts defy basic definitions, so use a composite framework instead.

Is Chicago on the Road to Becoming an American Ciudad Juárez?

Some great lessons for law enforcement, military, and intelligence professionals for countering street gangs of all stripes.