The US Must Deny Putin’s War Aims

The US Must Deny Putin’s War Aims

Those aims are being manifested in his smothering of Ukraine by the indiscriminate slaughter of the Ukrainian people and by his lust for possession of Ukraine’s enormous gas fields, the equally gigantic ArcelorMittal steel complex, all her Black Sea ports, and the Dnieper River water supply to Crimea.  All in the name of Putin’s Greater Russia.

He will not stop until he shatters the national fabric of Ukraine, its government and most especially President Volodymyr Zelensky himself.

Putin’s only vulnerability is the stopwatch measuring the speed-to-zero of Russian war funding, and the time before Russia erupts in massive civil unrest.

Putin’s job is to beat the stopwatch before the two war-ending prospects converge.

Meanwhile, Ukraine’s Zelensky also has a stopwatch running against him. He must do three things:  Keep fighting while continuing to seek and receive aid from friendly nations, disperse his government to prevent destruction in a decapitation attack, and keep up civilian morale.

Zelensky’s greatest vulnerabilities are twofold: A possible massive Russian missile barrage or large-scale carpet bombing designed to kill him and his cabinet, and the prospect of having the entirety of his military slowly attrited to combat ineffectiveness in the face of the seemingly endless Russian onslaught.

Logistics support from NATO and other countries is adequate but not optimal, in the face of Zelensky’s imminent need to train fresh Ukrainian forces.  His stopwatch is ticking loudly.

The solution, then, which the United States must endeavor to accomplish, is to make Putin’s stopwatch run faster and Zelensky’s run much slower.

Here is what the United States can do to help alter the timescale of both stopwatches:

Announce that Putin’s war of choice in Ukraine requires a vigorous and bold strategic shift in NATO defense posture: NATO headquarters in Brussels will move to Warsaw, Poland. NATO Headquarters South will shift northeast from Naples, Italy to Volos, Greece or to Izmir, Turkey. NATO Allied Air Force Headquarters will advance from Ramstein, Germany to Lielvarde Air Base in Latvia.

The US Space Force must be charged with a renewed effort to eliminate the Russian nuclear missile threat by massively funding a reborn Strategic Defense Initiative, now enhanced by 40 years of technological progress.

Prepare, and then donate, the 85 surplus Predator drones and their satellite control systems now in the AMARC (Aerospace Maintenance and Regeneration Center) boneyard in Tucson, Arizona for Ukrainian service.

Prepare the 48 easy-to-fly, easy-to-maintain, hard-to-hit A-4 Skyhawks now in the desert at AMARC, as substitutes for losses of Ukrainian Sukhoi Su-25 ground attack aircraft.

Most importantly, wire the Skyhawks for AGM-84 (SLAM-ER) missiles AGM-84H/K SLAM-ER - Wikipedia for extremely low-level anti-ship night attacks in the Black Sea, as well as attacks from the Black Sea against high value targets in Crimea and on the vulnerable Russian left flank.

NATO defines hybrid warfare as a combination of military and non-military, as well as covert and overt means, including disinformation, cyber-attacks, economic pressure, and deployment of irregular armed groups and use of forces. The Russians exploited it with their “Little Green Men” in Crimea. 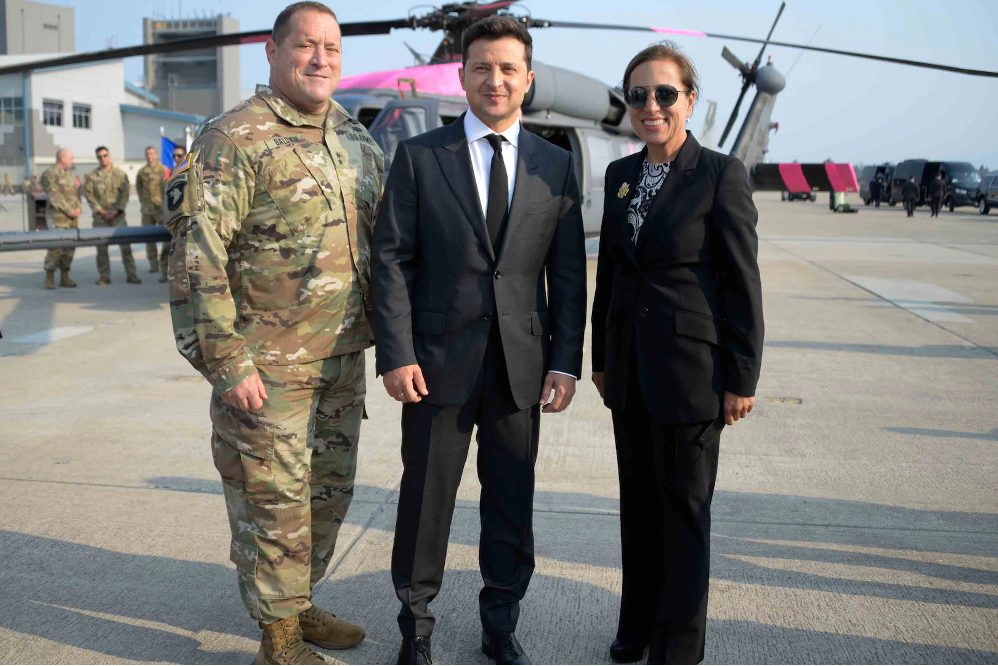 The best way to give the Russians a taste of their own hybrid medicine would be to activate units of the California National Guard which, along with a few units of the Tennessee Guard, have been training Ukrainians since 1993.

These American Citizen-Soldiers have trained and interacted with the Ukrainians for decades, and thus are not faceless entities from the basement of the Pentagon. The Californians are known, credible and trusted. Thus, they are the ideal personnel to work from NATO territory with Ukrainians in two areas:  Information Warfare and Advanced Training.

The California Guard also has, albeit in suspended animation, the most advanced IW unit in the world, the experimental 1st Joint SOFTWAR Unit (Virtual) of which this author is the progenitor. 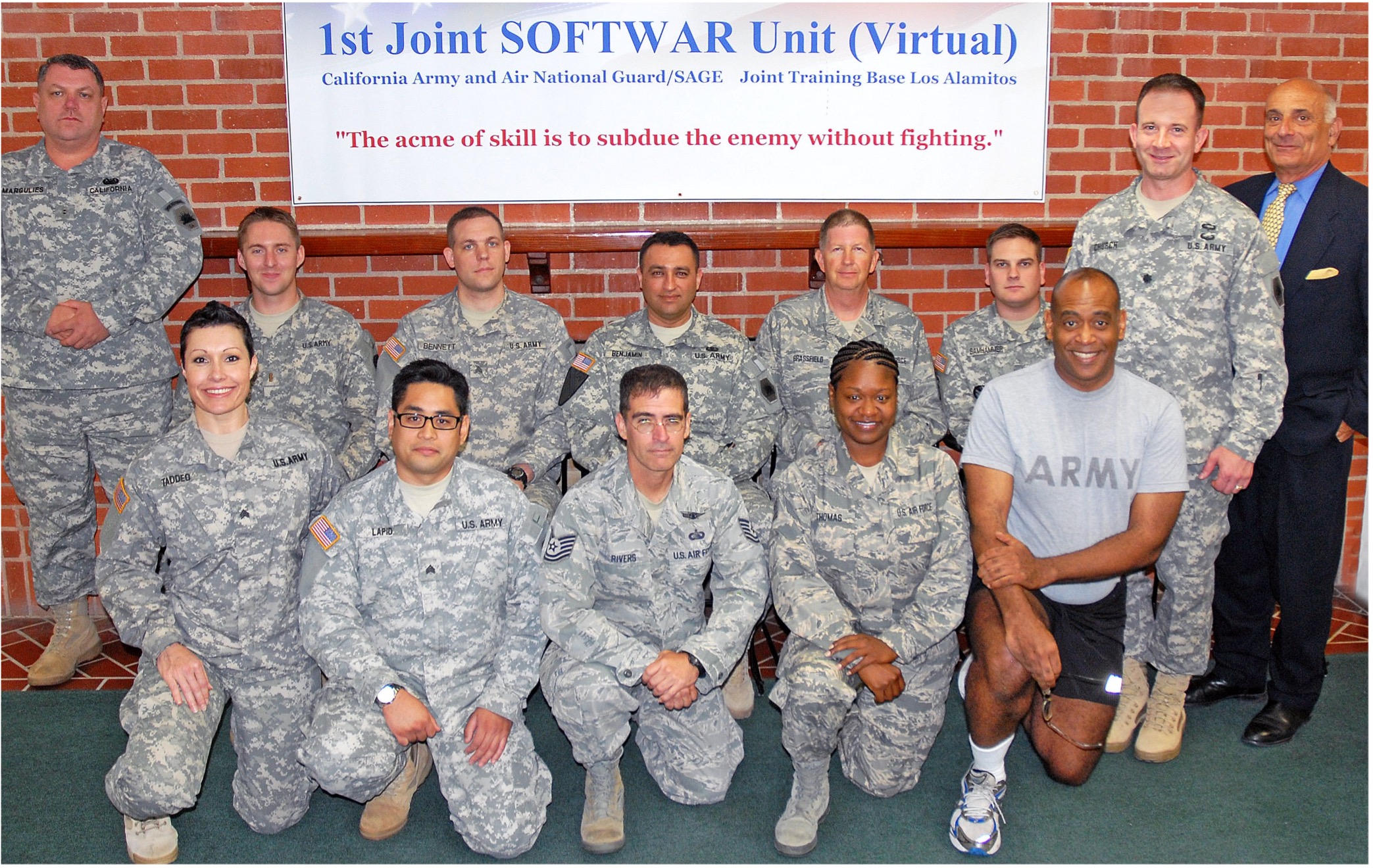 A small detachment of the 1st JSU(V) pictured above, could easily mesh into US units which have already rotated into NATO host countries.

The IW mission of the 1st JSU(V) would be to assist ongoing Ukrainian efforts (which are very good) with the latest methodologies and technologies from the American civilian sector that only Citizen-Soldiers possess.

For instance, given that Putin has already shut down all non-state TV, that he is tightly controlling the Internet, and is jamming shortwave broadcasts from the west, the best way to create public discord in Russia is through the telephone system.

At this writing, the Ukrainians have acknowledged about 600 Russian Enemy Prisoners of War (EPWs), perhaps more. If the Ukrainians were to give each EPW a cell phone and allow him to make ten (or more) humanitarian phone, text or video calls a day, that would be 180,000 calls in 30 days, multiplied many times over by all the families who want to know the status of their sons.

The Ukrainians should monitor but not censor the communications. The result would be growing anger among Russian civilians as word spreads of what’s really happening in Ukraine...from people they know, intimately.

Given the emotional tidal wave that would occur during such communications, Putin would have to contend with skyrocketing domestic discord and mass demonstrations, or he would have to shut down most of his country’s telephone system. The latter, of course, would have an enormous economic and logistical impact and would cause his “stopwatch” to run even faster.

The handful of Californians of the 1st JSU(V) could do wonders operating from NATO forward, given that there are several Alpha Geeks in the unit who can easily spoof country codes on any telephone system, and end-run any Russian countermeasures.

The second mission of the 1st JSU(V) would be to glue together whatever remains of the Ukrainian resistance, should the Zelensky government fall to an overwhelming Russian force of arms.

This mission would be two-fold:  Assist in the organization and training of units in guerrilla warfare, in safe havens or by televised means. The prototype for the latter already exists in the US civilian world.

Second, keep up the morale of scattered groups of Ukrainian Partisans where the airspace is uncontested, or where there is local air superiority exists, by using California’s Reaper UAVs donated to and flown by Ukrainians with Ukrainian markings.

These would be valuable flying TV transmitters, operating at night, to broadcast news and combat information, analogous to the BBC’s organizational steganography to the French resistance prior to D-Day.

The concept of flying TV stations was first demonstrated by Project Stratovision in 1948 with B-29s using a ripple relay technique.

Note that while the Pennsylvania Air Guard’s 193rd Special Operations Group (to which the author was a consultant) operates EC-130J Commando Solo III flying TV stations, they are too big a target with too many people on board to operate in or near contested airspace. 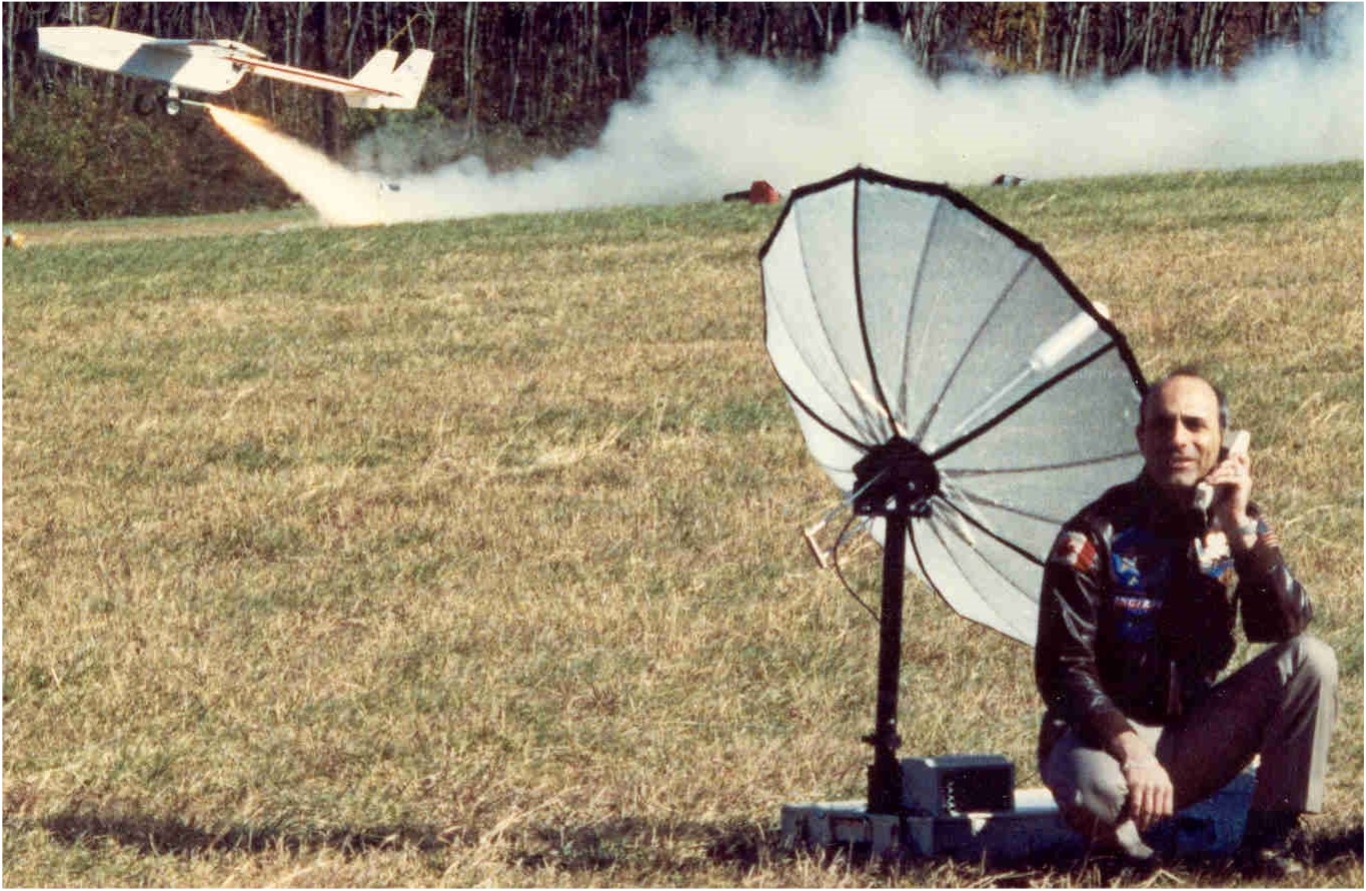 By using the original 1948 ripple relay technique on Reapers carrying low-power TV transmitters, it would be possible to illuminate large chucks of the country with morale-boosting and battle winning information. [The author, pictured above, pioneered the ripple drone technique in 1991].

Such methodologies could be needed for a very long time, as the Ukrainians seem to be willing to fight indefinitely until all Russian invaders are gone or dead.

The world has learned the lesson that appeasement of tyrants does not work. That lesson, at a cost of over 75 million dead in the ensuing World War II, should be strong enough evidence that Vladimir Putin cannot now be seen as the victor or even partial victor in his effort to crush Ukraine.

In the shadow of the US moves suggested above, the tyrant Putin will be reminded that his huge country may have nuclear weapons, but it has the economic power of South Korea… and the stopwatch is running on his bleeding economy.

With that in mind, every effort must be made by the United States above the current level of support, as noted above, to help Ukraine degrade Putin’s military movements, while the West chokes the breath out of his tiny economy and pushes Putin into a choice of 1) domestic implosion, 2) diplomatic escape, or 3) ignominious defeat.

Chuck de Caro is an information warfare consultant and contributing-author of the Cyberwar series of textbooks used by US and Allied war colleges. He has taught at the National Defense University and the National Intelligence University, where he continues to lecture on SOFTWAR. He was educated at Marion Military Institute, The US Air Force Academy and the University of Rhode Island. He served with the 20th Special Forces Group (Airborne) and was later an outside researcher for the Office of Net Assessment, where he became the progenitor of the world’s first prototype virtual military organization called The 1st Joint SOFTWAR Unit (Virtual).