The Law in These Parts: Palestinian Security Justice

The Law in These Parts: Palestinian Security Justice 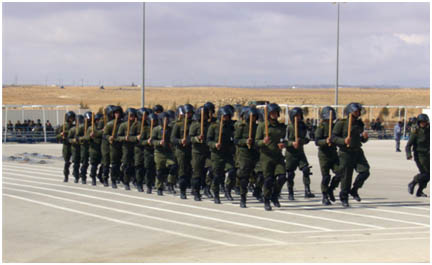 It wasn’t the trial of the century, but the strain of the pending verdict was apparent on the defendant’s face, a young, weary corporal.  The judge, a captain in the Palestinian Military Justice Commission (MJC), had just finished peppering the defendant with rapid-fire questions seeking answers as to why the corporal had abandoned his post and gone absent without leave (AWOL) for six days.  The style of jurisprudence on display had a European feel.  The military prosecutor, a lieutenant, sat with a dubious expression as the corporal explained to the military judge that he needed to go home to tend to a sick relative.  The “courtroom” setting was far from elaborate.  One would find no marble or richly stained hardwood floors here—the proceedings were occurring in the living room of a rented apartment in the West Bank.  Despite the humble décor, and modest means of the MJC, justice was being served. This court-martial is one indicator of the impact reforms are having across the Palestinian Authority (PA) security sector, particularly when it comes to the intersection of security and justice in the West Bank.

“Military” Justice is Not New to Palestinians

The concept of military justice is not new to the Palestinians.  In fact “military” justice was practiced in various forms for decades prior to the Oslo Accords, the agreement that allowed for the establishment of the PA as a limited arms regime.[i]  Although the PA does not have a military force, under the Oslo Accords, the PA was authorized to form the Security Forces that currently number around 32, 000 personnel.  The MJC was created to provide the justice function in support of the security forces units[ii], conducting criminal investigation, prosecution, and adjudication of crimes by security force personnel—the classic court-martial function designed to maintain good order and discipline.  The court-martial of the corporal was not entirely different from the ones heard against Palestinian Liberation Organization (PLO) personnel who fled to Egypt, Jordan and other States following the 1967 War and Israeli occupation of the West Bank and Gaza.  In fact, the MJC still follows the Arafat laws of 1979[iii] relating to penal laws and criminal procedure.  Although these outdated laws are functional, the PA security justice sector is in the midst of a new phase of development as seen by updated draft penal and criminal procedure laws and an adopted Code of Conduct, all awaiting approval by the PA president.[iv]

Security justice must be fair, impartial, accountable, efficient and transparent if Palestine is to ever become a nation-state.[v]  It can operate in living rooms, but it is better to have an open and transparent system where there are designated courtrooms, witness waiting areas and judges’ chambers.  One of the missions of the United States Security Coordinator (USSC) is to assist the MJC in building its security justice capabilities.  Although not known to many people outside the West Bank, the USSC has operated since 2005.  The USSC is also building security capabilities with many of the departments that operate as the Palestinian Security Force (PASF).   .  The corporal on trial had left his post as member of one of the battalions of the National Security Force (NSF)[vi],  whose mission is to defeat illegal militias and armed extremist groups when the force necessary exceeds that of the civil police.  Needless to say, the prosecutor in the court-martial of the corporal argued in summation how the corporal’s absence left his unit in a vulnerable predicament and caused others to fill the gaps. 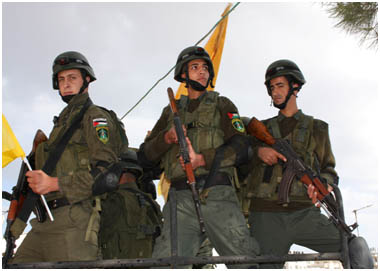 The prosecutor argued with vigor, but he hopes to sharpen his oratory skills from upcoming training provided by the Palestinian Center for Research and Strategic Studies, as well as justice training provided by local and international donor organizations.  The assigned military judge is also looking forward to training for himself and fellow members of the judiciary  where he hopes to improve his written communication skills for drafting decisions.  Both the prosecutor and judge recently witnessed a mock U.S. court-martial and received other instruction from the Defense Institute of International Legal Studies on topics such as human rights, rules for the use of force and prosecuting terrorists.

Besides training, the USSC is committed to improving the PASF through infrastructure projects.  Beside completion of the MJC Headquarters in Ramallah, complete with a new law library, courtroom, and internet server to connect all facilities in the West Bank,  the USSC is funding the refitting and technological upgrade of other military courtrooms in the West Bank.  The design and upcoming renovations of existing space will occur in Bethlehem and Hebron.  Future renovation sites are set for Jenin, Jericho and Nablus.  The USSC is also furthering the MJC’s capabilities with computer training, and the implementation of a case management system designed for the MJC.  This support allows the MJC to commit Palestinian resources on other important initiatives.  For example, the MJC implemented  a website where all decisions are being  published and applicable laws are being uploaded and available for viewing.  The website will greatly enhance the MJC and the PASF in their level of transparency with their justice system.

Justice is served in the West Bank

In the end, the corporal was found guilty, but retained in the NSF.  He was fined for absenting himself from his unit.  He was relieved, and even thanked the prosecutor as he was escorted out of the apartment.  Although the prosecutor did not share the corporal’s contentment, justice was done in the West Bank.  It is not perfect, but justice rarely is – even in the United States.  Arguably good order and discipline was restored to the corporal’s battalion.  Others in the NSF will know that they will face prosecution if they go AWOL or commit more egregious offenses.  The fine was hefty enough for the corporal to think twice before going AWOL again.  With USSC’s continued assistance, the MJC will become more efficient and self-sustaining organization to ensure security justice in Palestine. 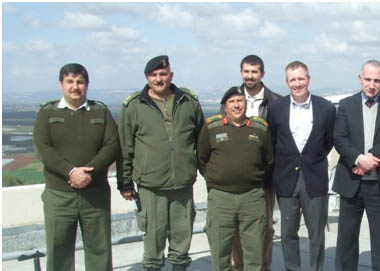 Colonel Deegan (5th from the left) at a site visit for a future courtroom in Jenin in the West Bank, March 2014 with members of the Military Justice Commission, Palestinian Authority and other members of the Palestinian Security Force.

[i] Westerners refer to military justice as “security justice” in the West Bank because the Oslo Accords do not allow the Palestinians to have military forces.

[iii] The Code is named after the then-head of the PLO, Yasser Arafat.

[iv] These proposed laws, drafted by a revision committee composed of stakeholders from inside and outside the PA, were forwarded to the PA Prime minister’s office in 2014, and currently await approval, in spite of the absence of a legislative function in the PA government to push these laws through.

[v] Those inside and outside of Israel and the West Bank differ as to whether there is a one-state or a two-state solution in Israel.  The author take no position on this issue in this article.

[vi] The NSF consists of approximately 10,500 personnel divided into ten battalions, a headquarters and a Rapid Response Unit.  The NSF supports the civil police and act as a national gendarmerie with no arrest powers.