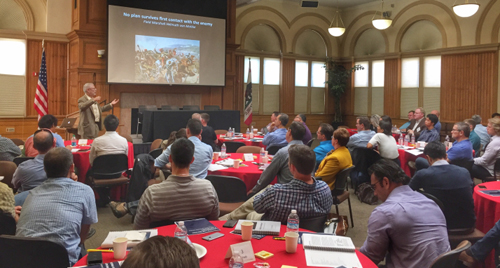 The results: 13 Universities will offer the course in the next year, government sponsors committed to keep sending hard problems to the course, the Department of Defense is expanding their use of H4D to include a classified version, and corporate partners are expanding their efforts to support the course and to create their own internal H4D courses.

It was a good three days.

Another Tool for Defense Innovation

Last week we held our first 3-day Hacking for Defense Educator and Sponsor Class. Our goal in this class was to:

What our sponsors have recognized is that Hacking for Defense is a new tool in the country’s Defense Innovation toolkit. In 1957 after the Soviet Union launched the Sputnik satellite the U.S. felt that it was the victim of a strategic technological surprise. DARPA was founded in 1958 to ensure that from then on the United States would be the initiator of technological surprises. It does so by funding research that promises the Department of Defense transformational change instead of incremental advances.

By the end of the 20th century the Central Intelligence Agency (CIA) realized that it was no longer the technology leader it had been when it developed the U-2, SR-71, and CORONA reconnaissance programs in the 1950’s and 1960’s. Its systems were struggling to manage the rapidly increasing torrent of information being collected. They realized that commercial applications of technology were often more advanced than those used internally. The CIA set up In-Q-Tel to be the venture capital arm of the intelligence community to speed the insertion of technologies. In-Q-Tel invests in startups developing technologies that provide ready-soon innovation (within 36 months) vital to the IC mission. More than 70 percent of the In-Q-Tel portfolio companies have never before done business with the government.

In the 21st century the DOD/IC community has realized that adversaries are moving at a speed that our traditional acquisition systems could not keep up with. Hacking for Defense combines the rapid problem sourcing and curation methodology developed on the battlefields in Afghanistan and Iraq by Colonel Pete Newell and the US Army’s Rapid Equipping Force with the Lean Startup practices that I pioneered in Silicon Valley and which are now the mainstay of the National Science Foundations’ I-Corps program. Hacking for Defense is a problem-solving methodology that offers the DOD/IC community a collaborative approach to innovation that provides ready-now innovation (within 12-36 months).

Pete Newell, Joe Felter and I learned a lot developing the Hacking for Defense class, more as we taught it, and even more as we worked with the problem sponsors in the DOD/Intel community. 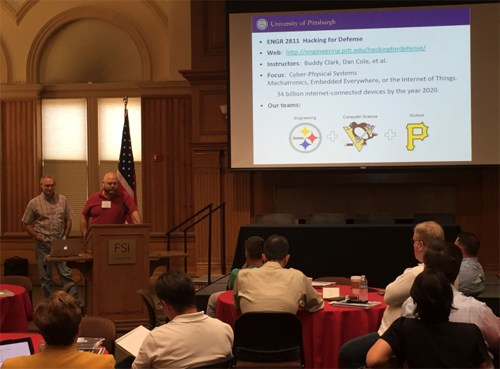 Since one of our goals is to make this class available nationally, now it was time to pass on what we had learned and to train other educators how to teach the class and sponsors how to craft problems that student teams could work on.

(If you want a great overview of the Hacking for Defense class, stop and read this article from War on The Rocks)

When we developed our Hacking for Defense class, we created a ton of course materials (syllabus, slides, and videos). In addition, for the Educator Class we captured all we knew about setting up and teaching the class and wrote a 290-page educator’s guide with suggested best practices, sample lesson plans, and detailed lecture scripts and slides for each class session. We developed a separate sponsor guide with ideas about how to get the most out of the student teams and the university.

The Educator Class: What We Learned

One of the surprises for me was seeing the value of having the Department of Defense and other government agency sponsors working together with the university educators.  (One bit of learning was that the sponsor’s portion of the workshop could have been a day shorter.)

Two other things we learned had us modifying the pedagogy of the class.

First, our mantra to the students has been to learn about “Deployment not Demos.” That meant we were asking the students to understand all parts of the mission model canvas, not just the beneficiaries and the value proposition. We wanted them to learn what it takes to get their product/service deployed to the field, not just have another demo to a general. This meant that the minimal viable products the students built were focused on maximizing their learning of what to build, not just building prototypes. While that worked great for the students, we learned from our sponsors that for some of them getting to deployment actually required demos as part of the means to reach this end. They wanted the students to start delivering MVPs early and often and use the sponsor feedback to accelerate their learning.

This conversation made us realize that we had skewed the class to maximize student learning without really appreciating what specific deliverables would make the sponsors feel that the time they’ve invested in the class was worthwhile. So for our next round of classes we will: 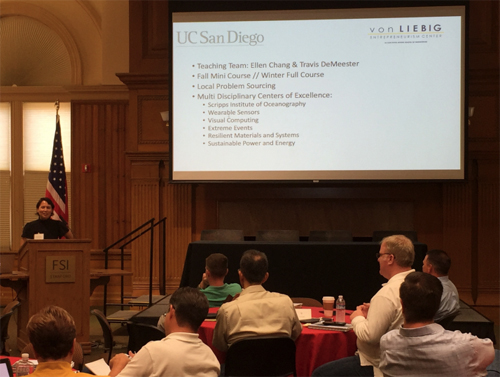 Our second insight that has changed the pedagogy also came from our sponsors. As most of our students have no military experience, we teach a 3-hour introduction to the DOD and Intel Community workshop. While that provides a 30,000-foot overview, it doesn’t describe any detail about the teams’ specific sponsoring organization (NSA, ARCYBER, 7th Fleet, etc.). (By the end of the quarter every team figures out how their sponsor ecosystem works.) The sponsors suggested that they offer a workshop early in the class and brief their student team on their organizations, budget, issues, etc.  We thought this was a great idea as this will greatly accelerate how teams target their customer discovery.  When we update the sponsor guide, we will suggest this to all sponsors.

Another surprise was how applicable the “Hacking for…” methodology is for other problems. Working with the State Department we are offering a Hacking for Diplomacy class at Stanford starting later this month. And we now have lots of interest from organizations that have realized that this problem-solving methodology is equally applicable to solving public safety, policy, community and social issues internationally and within our own communities. We’ll soon launch a series of new modules to address these deserving communities.

Entrepreneur-turned-educator Steve Blank is credited with launching the Lean Startup movement. He’s changed how startups are built; how entrepreneurship is taught; how science is commercialized, and how companies and the government innovate. Steve is the author of The Four Steps to the Epiphany, The Startup Owner’s Manual -- and his May 2013 Harvard Business Review cover story defined the Lean Startup movement. He teaches at Stanford, Columbia, Berkeley and NYU; and created the National Science Foundation Innovation Corps -- now the standard for science commercialization in the U.S. His Hacking for Defense class at Stanford is revolutionizing how the U.S. defense and intelligence community can deploy innovation with speed and urgency.