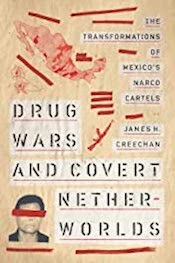 For years, political discourse has shaped the social construction of drugs and the War on Drugs, particularly during its securitization in the early 1970s. Although Mexico neighbors the US, and is the principal supplier of drugs to the country, the notion and perceptions of the drug war is remarkably different on both sides of the Rio Grande. In his book, through a constructivist lens, Creechan argues that the US rhetoric about drug trafficking in Mexico has been largely simplified emphasizing mostly the antagonism between drug cartels or drug lords and the government, thereby ignoring the complex dynamics and symbiotic relationships between the civil society, drug trafficking, and the state. The author unveils the connections among these actors, painting a detailed picture of the crude brutality and reality of the drug war in Mexico that has not been as accurately depicted in foreign narratives. Creechan offers a more precise version of the drug war and the drug trafficking phenomenon in Mexico, not commonly available for the English-speaking audiences.

Drug Wars and Covert Netherworlds explores a series of questions including: Who are the drug lords, and what motivates them? What is unique in Mexico that contributes to the empowerment of drug trafficking organizations (DTOs)? Why are they so powerful? Can all these problems be fixed? To approach these questions, the author draws on three decades of research from prominent Mexican newspapers, an extensive review of the existing literature, and personal experiences. His study employs a wide range of sociological techniques, including analysis of court records, random sample interviews with citizens across the border region of Arizona and Sonora, where the Sinaloa cartel operates.

In eight chapters, Creechan guides the reader through the history of drug trafficking in four distinct but interconnected wars at various levels of analysis. He starts with the US led War on Drugs, then continues with wars between rival cartels, intra-cartel, and finally the state-narcos war. The author unveils through these conflicts, the trajectories, evolution and transformation of the drug war and drug cartels during various presidential administrations, the narco-state-civil relationships, and the romanticization of the narco-culture and drug lords such as Joaquin “El Chapo” Guzmán.

What started as a serendipitous investigation, resulted in a masterful historical account that provides an ampler and reliable image of the covert netherworlds of drug trafficking. As the author puts it, “[t]his book argues that the popular history of narco in Mexico has too often been narrowly framed within a perspective that reflects the ideology of the U.S. War on Drugs and that it overemphasizes the criminal agency of individuals prominent within the drug world” (p. 6). Creechan contributes to the drug war’s narrative from an outsider’s perspective. He points to the restrictive accounts of the drug war sustained by the US for decades and sheds light on the neglect by the American academia to produce reliable depictions on the drug war outside the Drug Enforcement Administration’s (DEA’s) reports and suggests that more attention should be directed towards turning the relevant subject into a substantive area of research.

The author suggests that far from the usual US dialectic tale between capos vs. the state, drug trafficking in Mexico should be understood as a ‘covert netherworld’ that takes form when three critical components, social milieu, covert operations, and illicit commerce, convergence in a particular and potent arrangement. At its core, this netherworld is an invisible space inhabited by criminal and clandestine actors. In this context, it is possible that the source of resilience of DTOs in Mexico does not necessarily comes from their power and territorial dominance, but from an intricate web of actors including governors, politicians, elites, businessmen, and civilians combined with high levels of corruption and weak institutional capacity. Additionally, the deep embeddedness of the narco-culture in Mexico contributes to the solidification of established networks that have become extremely difficult for the governments to unravel and defeat.

Furthermore, in a more ontological take, the author goes back to the fundamentals inquiring: How do we know about cartels? Putting in it differently, how was the mainstream view of cartels and drug lords created and constructed? What is the source of all the different concepts and perceptions of the drug trafficking world? Typically, outside Mexico, the sources to learn about cartels come from tv, series on streaming platforms such as Netflix, social media, fictional accounts, or music through narcocorridos (drug ballads). In general, the term “cartel” is mainly used to refer to criminal organizations in Mexico, concentrating the concept on capos or kingpins. According to Creechan, the DEA coined the term circa 1980s. The Colombian Medellín criminal organization led by Pablo Escobar was the first to be classified by the US as such. Since then, the term has been used to refer to criminal organizations across Latin America.

The author suggests that such a definition of cartels does not fit the true nature of DTOs in Mexico. He states, “[c]artel is now firmly entrenched in the English-speaking world even though it provides only a nominalclassification for any type of drug gang…Cartels does not take into account the complex and unseen dimensions of organized criminal activity that have been described in this book and characterized as a covert netherworld” (p. 257). The idealized model and generalizations on the drug trafficking organization’s modus operandi and structures, for example, can affect the policy making process, its impacts, and the way we understand and analyze these criminal groups. DTOs in Mexico, however, far from presenting a fixed model, exhibit different structures and behaviors, they are constantly evolving and have grown into more fragmented types of organizations.

Towards the end of the book, Creechan explores some final questions: Can all these problems be fixed?  What is approach of the current Mexican President, Andrés Manuel López Obrador (AMLO), to the drug war under what he calls “the fourth transformation?” During the last years, there have been a couple of incidents that have revealed more clearly the real power and influence of cartels. The author illustrates the latter with some examples. One case was the liberation (by AMLO’s orders), of Ovidio Guzmán Loera, one of El Chapo’s son, after he was caught by members of the National Guard on October 17, 2019, in Culiacán, Sinaloa. Another instance was the cartel’s strong support of the political party Morena’s (founded by AMLO), candidate for governor during the 2021 elections. As Creechan mentions, before 2021 the Mexican state had never elected a leftist governor before. Sinaloa was mainly ruled by candidates from other parties such as the PRI or PAN or their coalition. It is not a novelty that the government in Mexico is involved with drug trafficking organizations, but these events put a different perspective on this relationship and the great impact cartels have on democracy and the social fabric of society.

Magical-Realism and the Future of the Drug War

Creechan closes with a less than hopeful vision of the war on drugs, at least not with the President’s current plan of battling drug traffickers with “abrazos no balazos” (hugs, not bullets). “This is a crucial time for Mexico to do something about the cartels,” he states, which are becoming more violent, more powerful, and influential (p. 298). The author sensibly refers to the realismo magico (magic-realism) of García-Márquez, as something intrinsic in the Mexican or Latin American cultures. AMLO’s political rhetoric perpetuates this unrealistic magical thinking into his speeches, often stating that there is no longer a war, that the state is not battling drug cartels. However, violence continues to permeate the country, reaching higher rates of drug-related homicides each year. Innocents keep dying and disappearing in the hands of drug cartel members, and entire communities continue to live in constant fear.

Drug Wars and Covert Netherworlds concludes noting that Mexico is far from solving its issues with drug trafficking, along with the many unintended consequences of the drug war. Without a comprehensive security plan and commitment by the state to destroy covert netherworlds, this will be not plausible at least in the foreseeable future. Creechan’s work is an important contribution to the field making the history and evolution of drug trafficking in Mexico accessible to non-Spanish speakers. Overcoming language barriers is crucial to widening the conversation about the global drug war that transcends borders.

This book review is…

This book review is excellent. I appreciate you telling me. It really helps me out a lot. I've enjoyed using PapersOwl each and every time. I just made a purchase for a psychology class, thus I went out of my way to find a writer who had experience in the subject. I believe that you should see here https://papersowl.knoji.com/ this extra information on the PapersOwl review. I felt at ease knowing that I was in contact with a degree-holder who could undertake the research required to complete the psych paper. The final product was correctly completed and no problems were found. PapersOwl saved the day once more!