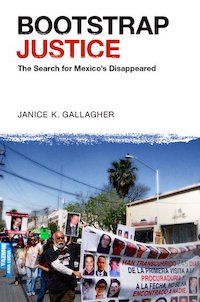 Mexico is currently facing a crisis of disappearances due to the drug war and overall impunity surrounding these cases. Bootstrap Justice will be released for sale 8 November 2022. The author argues that the sustained mobilization of the families of the disappeared in Mexico has been crucial for legislative and judicial advances and has, in some cases, been able to cut through the layers of impunity that haunt the Mexican judicial system. The text is written by Janice K. Gallagher who earned her PhD from the Department of Government at Cornell University in 2015 and is an Assistant Professor in the Department of Political Science at Rutgers University-Newark. Gallagher's book captures the importance of social mobilization within Mexico and contributes to understanding the relationship between mobilization and impunity. The author shows how citizens’ participation in mobilization and claim-making can create internal changes that empower citizens to challenge impunity.

Bootstrap Justice is organized into five main sections with seven chapters, including an introduction, Chapter 1, and a conclusion. Chapter 2, “The Beginnings” lays the theoretical and empirical basis for tracing how legal consciousness shifts over time and how disappearances propel mobilization. The author utilizes the life histories and ethnography of three families touched by disappearances to understand how legal consciousness shifts in the process of sustained mobilization. She focuses on the effects on people’s actions when claiming rights and their right-bearing outcomes. Gallagher provides specific cases in the chapter that help connect each case’s legal consciousness, social position, and biographical availability, to analyze how it led to their involvement in sustained mobilization. The cases show how the decision to mobilize is filtered through each family’s way of thinking about the law. These people's actions are shaped by the costs and benefits of mobilization, personal circumstances, resources, and social networks.

The third chapter, “State and Civil Society Responses to Disappearances in Mexico” takes an in-depth look at the history of impunity and disappearances in Mexico. It also notes the evolving political and legal opportunities for those affected by disappearances and their prospects for activism and advocacy. The author argues that Mexican state-society relationships regarding human rights shift from adversarial before 2006 to one in which advocacy is possible. Before 2006, the targeted repression of activists by the Mexican government severely limited activists’ challenges to impunity. By 2010 activist organizations were able to challenge systemic normative biases that had criminalized victims in the past and prevented them from obtaining justice. Advocate organizations could facilitate communication and the exchange of crucial investigative information with state judicial officials during this time. After 2011 powerful independent victims’ collectives have been able to shift and lead activism and advocacy. As the crisis of disappearances worsened and the high-profile disappearance of 43 students in Ayotzinapa made headlines, the disappeared family members became legitimized and became political protagonists. The author concludes that the state has allowed the opening of spaces for victim activists due to a history of challenging the criminalization of victims, the undeniable crisis of disappearances and the apolitical profile of victims’ families.

The fourth chapter, “The Evolution of Legal Consciousness” focuses on the three family’s transformation of legal consciousness and their evolution from apolitical citizens to activist and advocate leaders. The chapter focuses on the disappearances as a catalyst for change in the family’s way of thinking about themselves, the law, and the state. The author traces how sustained mobilization is sustained by these families’ interactions, leading them to converge upon similar views of the law and then strategically act on these new understandings of the law. The author traces common repertoires of contention that include confronting the state with contentious action, partnering with social movements to gain access to state officials, strategically navigating the state’s judicial bureaucracy, locating allies within the state and participating in independent searches for their loved ones.

The fifth chapter, “Legal and Political Opportunities of the Uneven State” focuses on how the common repertoires of contention mentioned in the fourth chapter are applied to erode impunity. The chapter also shows the adeptness of victims’ families in exploiting changing alliances within the state and among the state and criminal actors, as well as relationships with sympathetic state actors. This adeptness of victims’ families has allowed for low-profile negotiations with the state. These negotiations have allowed families to search for disappeared persons in a state like Tamaulipas, whose government is known for having a close relationship with drug trafficking organizations. In places like Veracruz, the collectives were able to propel the issue of disappearances to become the most salient electoral issue. When the attorney general of Veracruz sidelined victim collectives, the collectives sought the federal government to allow them to continue their searches. Finally, in Nuevo Leon, after a violent contestation of the plaza by drug trafficking organizations, a space was formed for civil societies and the government to address impunity.

The Sixth and last chapter, “To What Effect?” focuses on the impact sustained mobilization has had on impunity in Mexico. The author traces measurable changes in four categories of outcomes: legislative, institutional, judicial, and movement. Legislatively, the author points to two pieces of legislation that directly resulted from the victim’s movement. The first is the 2013 General Law for victims defined the rights of and provided remuneration to victims of crime. The second law is the 2017 General Law on Enforced Disappearance, which defines and criminalizes “enforced disappearance” and requires the immediate investigation and coordination necessary to search for the missing. From an institutional standpoint, these new laws create new judicial and governing bureaucracies tasked with addressing the disappearance crisis in Mexico.

Judicially in Nuevo León, sustained mobilization has made inroads into impunity. A specific example is the Executive Commission for Attention to Victims (Comisión Ejecutiva de Atención a Víctimas – CEAV), which distributes financial support to victims’ families. The problem is that the enforcement of these new laws is still hindered by budgetary constraints, the lack of a single integrated database for missing people, and the misclassification of disappearances by government officials. A specific example is how the complicity of state forces in disappearances leads to misclassifying the disappearance to avoid federal involvement in the investigation. Most worrisome is that the indicting of perpetrators has not led to the location of victims in nearly all cases. The author then traces how mobilization affected the cases for each family and shows how the capacity of movements has grown in the past decade. These movements have formed complex repertoires of contention, formed strategic alliances, provided support, and have the ability to conduct independent searches.

Bootstrap Justice is a valuable contribution to several areas of study, including violence, criminal governance and social mobilization. The author shows a clear path to battle impunity through the sustained mobilization of victims’ families in Mexico and presents a complex understanding of the challenges still facing these families. The author utilizes a variety of interviews with families of victims and longitudinal organizational ethnographies. This methodology allows the author to expose the mechanisms through which individuals join movements that impact policies and systemic outcomes. The analysis of sustained mobilization provides an in-depth understanding of how it changes participants’ conceptions of themselves, the state, and the law. These changes and interactions with other victims' families allow for the formation of strategies that directly impact impunity. The author also notes several challenges that remain in the search for justice. Important divisions between the search for missing people and the prosecution of those responsible at the judicial level, perpetuate impunity. Gallagher masterfully intertwines the cases of families of victims with broader trends of cases of disappearances to find valuable insights on sustained social mobilization and legal consciousness in Mexico. Most importantly Gallagher traces the evolution of this movement and uncovers a legitimate citizen driven path for tackling endemic impunity in Mexico.