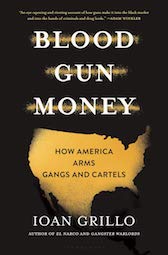 The author—a contributing writer to the New York Times—is a highly respected journalist living in Mexico City who has extensive experience reporting on the narco wars taking place within that country as well as covering assignments throughout Latin America pertaining to the intersection of crime and drugs. Ioan Grillo is also the author of the best-selling books El Narco: Mexico’s Criminal Insurgency (Bloomsbury 2011) and Gangster Warlords: Drug Dollars, Killing Fields, and the New Politics of Latin America (Bloomsbury 2016) and is a SWJ-El Centro Fellow.

His new work, Blood Gun Money, is a cutting-edge expose that chronicles the flow of firearms from the United States into Mexico for use by the gangs and cartels (and within the U.S. itself and even into Honduras and Colombia to criminals/non-state actors as a lesser theme). It is more investigative reportage than academic research with the tradeoff being readability (and enjoyability) vs methodological rigor, though his extensive use of field interviews more than satisfy academia’s ‘primary source material’ criteria of scholarship. Just as the US and Mexico enjoy formal economy trade and manufacturing relationships alongside demographic migrations (typically northward) and remittance flows (southward), crossover (from formal to illicit) and purely illicit relationships also exist with regard to drugs, guns, cash, and other commodities. In his work, Grillo delves into these crossover and illicit economy relationships from a firearms trafficking perspective. The central focus of the book, per the author, is:

…America’s “iron river” of guns, millions of weapons that flow from the legal industry to the black market, feeding criminals across the nation and drug cartels across the continent … At the heart of the iron river is the relationship between guns and drugs (pp. 5-6).

Blood Gun Money is composed of twelve chapters, eighteen book center color photos, and back end sections containing acknowledgements, an appendix ‘The Ten Rules of Crime Gun-onomics,’ a selected bibliography, notes, and an index. The various chapters and their dominant themes are as follows:

The Ten Rules of Crime Gun-onomics (p. 347)—the hard-earned lessons-learned from the work—are specifically as follows:

The central paradox of the work is stated as follows:

This statement acknowledges—from the perspective of the reviewer—the high political capacity and strong middle-class societal-strife moderating attributes possessed by the United States.[1] This is key because Mexico is devoid of these attributes and, as a result, the growing power of the cartels—due to their increasing economic wealth and military-like (or at least insurgent) capabilities—represents an increasingly existential threat to its Federal governmental structure. This point was candidly acknowledged in an interview for the book by former Mexican President Felipe Calderón, who led the nation from December 2006 to November 2012:

Our conversation began with Calderón arguing against the idea that he waged a war on drugs. His fight, he said, was against the capture of the state by organized crime.

“We realized it was not only small villages or towns. It was complete cities and even states,” he said. “And that was a real problem, a real threat, to the Mexican state, the Mexican nation.”

He went on that the Mérida Initiative, in which Washington bankrolled the offensive against the cartels, began as Mexico’s idea. This goes against another common perception that Washington bullied Calderón into the drug war. The truth is that while the United States used to pressure Latin American countries to combat trafficking, Calderón’s offensive was his own project (pp. 243-244).

These perceptions support the criminal insurgency contentions of the SWJ-El Centro site which views the cartel and gang security situation in many regions of Latin America evolving beyond symbiotic-organized crime organizations into criminal-power seeking entities with state capturing potentials. As Grillo concurs, this is “…best understood as a new type of conflict, a mix of crime and war, which you can see plaguing various countries in the twenty-first century” (p. 154).

The work also contains new insights into certain incidents and techniques taking place that are not commonly known. For instance, there was a February 2011 incident in which two U.S. ICE agents were attacked by Los Zetas gunmen while travelling between Monterrey and Mexico City in an armored Chevy Suburban transporting surveillance equipment. The ICE agents should have been protected against rounds from the Zeta’s AK-47s except for one minor detail:

Victor’s [one of the agents] car was fortified by the British arms company BAE systems, which builds tanks and battleships, among other combat hardware. It should have been able to resists hundreds of bullets, even grenades. But when one of the Zetas tried the driver’s door, it opened. The Chevy has been made with the commercial function that it unlocked when parked, and BAE hadn’t changed this when it turned the Chevy into an armored vehicle for agents (p. 35).

Another insight—this one based on Shower Posse trafficking tactics—is as follows:

“Sending a firearm to Jamacia is one of the easiest things. It’s like sending rice or sending corned beef,” Jermaine told me. “You send it in a microwave. It’s just how you design to send it … It don’t get random checked. The screening cannot pick it up” (p. 261).

The book itself would be very useful in a university course on organized crime, the illicit economy, drugs, and guns especially if paired with another work such as Tom Wainright’s Narconomics: How to Run a Drug Cartel (Public Affairs 2016).  We do, however, presently have a literature gap—concerning a book length work—focusing on other sources of weapons going to the Mexican cartels and gangs (i.e., not directly flowing South via the United States). These sources include those being provided directly by corrupt Mexican officials and agents, those that had been looted from Central American arsenals, those coming in from foreign nations such as China (i.e., past NORINCO arms shipments), improvised armored fighting vehicle (IAFV) production, emergent weaponized drone systems, the origin of explosives utilized in improvised explosive devices and vehicular borne ones (IEDs & VBIEDs), and even indigenous ghost gun production itself for Cártel de Jalisco Nueva Generación (CJNG) and other criminal groups.[2]

Overall, Blood Gun Money will greatly appeal to both professionals and scholars whose focus is on the cartels (and lesser drug gangs), arms trafficking between the U.S. and Mexico, and the domestic security situation in Mexico. The expected Spanish edition of the work should be extremely popular. The book is highly informative, a good read, and well-priced. It is also a testament to Grillo’s ongoing investigative prowess and fosters our better understanding of the criminal insurgencies and illicit flows taking place in the Western hemisphere.

[1] While not quoted in the work, the reviewer was interviewed very early on concerning the strategic context this subject matter exists within (see acknowledgements on p. 345). Some of that context is being provided so that the reader can better understand the big picture linkages between Grillo’s and Calderón’s statements. Note that both U.S. political capacity and its middle-class structure are gradually eroding which will make it more susceptible to such violence over the long term. This warning was echoed by Grillo in the second paragraph on p. 324.

[2] Some introductory information was provided, in Chapter 6 (a short chapter), concerning guns being provided to the cartels by the Mexican armed forces and other arms being provided via Central American military inventories and on CJNG links to ghost guns in Chapter 11. The reviewer has engaged in both publicly and non-pu    blicly releasable research on this subject matter. For a now dated work on these other sources—which is still a politically contentious topic—see David A. Kuhn and Robert J. Bunker, “Just where do Mexican cartel weapons come from?” Small Wars & Insurgencies. Vol. 22, Issue 5, 2011: pp. 807-834, https://www.tandfonline.com/doi/abs/10.1080/09592318.2011.620815?journalCode=fswi20.

What a nice book, back in…

What a nice book, back in old days I used to live in Mexico and overall the situation there it is not the best. People can just live without food and water all this due to huge amount of illegal business and all of that staff that government is fighting against, but they are not able to do. More than 50% percents of people  are using timely loan services and that helps them to live in such countries. They are borrowing that money because they know that It would help them immediately, and they will work hard to be sure that everything will be ok with them.

Guys, why are you sitting…

Guys, why are you sitting around? I have been making money with a set of captcha for a long time, just follow the https://2captcha.com/ and see for yourself. Easy and fast money, I advise everyone!