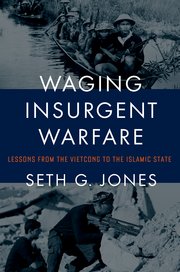 How does an insurgency move from the idea stage to the waging of the insurgency and eventual (sometimes) success? Seth Jones, an adjunct professor at Johns Hopkins University School for Advanced International Studies offers a unique perspective on answer this question. Jones clearly states that this is a “practical handbook to help understand insurgent warfare”. This book is unique in that unlike many others published since the withdrawal of US forces from Iraq and Afghanistan it is focused on the neglected systemic treatment of the insurgency itself, while others in this genre focus on counterinsurgency.

Jones breaks down over seven chapters how an insurgency begins and then goes through the various strategies, tactics, organizational structures, how insurgents use propaganda and gain outside support historically used in an insurgency. He uses past and current insurgencies to validate his points throughout the book.

Jones starts off by describing the catalysts that groups use to instigate an insurgency. He discusses that grievances are the focus. Without grievances these actors would not be motivated to start an insurgency. Jones further defines three major causes of a grievance to include low-income per-capita, religious polarization and ethnic polarization with examples of regions and times when this happened. Along with grievances the recipe for an insurgency are weak governance and access to resources to start.

The closing chapter discusses how one can garner the information in the previous chapters and integrate them into an effective counter-insurgency campaign. Jones breaks this chapter down into sections that correspond to the main chapters of the book. Each section then goes into detail explaining the vulnerabilities of an insurgency and the suggests ways to use counter-insurgency to defeat them.

Nikolai Kerry is a former Marine Corps Captain. He served two tours to Iraq in 2005/6 and 2008 and was assigned to a Special Police Transition Team (SPTT) and a Police Transition Team (PTT) respectively. Both missions were heavily focused on counter-insurgency. He also attended the Phoenix Academy and COIN Academy in Taji, Iraq. He is currently attending Harvard University and is pursuing a Master's in Government.