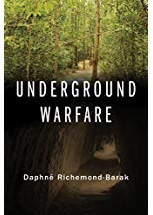 Fighting in tunnels is an obscure and potentially brutal facet of warfare.[1] While long a feature of war, it had been considered a facet of the past replaced by maneuver.  From the realm of sappers and sieges through trench warfare in World War I, tunnel warfare had been a recurring aspect of combat.  Memories of wars past recall the use of trenches and tunnel mines on the Western Front,[2] and entrenched Japanese forces battling US Marines from tunnel complexes on Pacific Island strongholds including Mount Suribachi on Iwo Jima, where 21,000 Japanese fought Marines equipped with flamethrowers and grenades from a hardened 7.5 mile complex with steel doors and fortified rooms.[3]

Vietnam and the Vietcong demonstrated the complexity of mixing civilians and combatants, with US forces engaging their adversaries known as ‘tunnel rats’, in extensive tunnel systems in Cú Chi[4] while North Korea’s cross-border threats demonstrated the deterrent potentials of sophisticated tunnel complexes.  The Soviet-Afghan war against the Mujahedeen and then the Allied war in Afghanistan against the Taliban and al-Qaeda illustrated the difficulty of engaging non-state forces in rural and mountainous caves and tunnels. Tora Bora symbolizes the latter to this day.  In Libya existing underground infrastructure including irrigation canals were converted into bunkers and sanctuaries for Col. Gaddafi and his regime.

Tunnel warfare is now becoming a contemporary concern[5] as seen in its use by AQIM (al-Qaeda in the Islamic Magreb) in Mali, and by Hamas for smuggling, terrorism, and increasingly as a means of urban warfare in Gaza,[6] Syria, and Iraq.

The Scope of Underground Operations

Daphné Richemond-Barak, an assistant professor at the Lauder School of Government, Diplomacy and Strategy and head of the International Law Desk at the International Institute for Counter-Terrorism (ICT) at the Interdisciplinary Center Herzliya (Israel) provides a comprehensive overview of the issues surrounding underground warfare and fighting in tunnels.  Her treatment of the issue is groundbreaking.  Starting with a historical overview—she surveys the evolution of underground warfare from the ancient through the contemporary—she provides a solid introduction to the issue, outlining tactical, operational, and strategic perspectives on this type of warfare.

Richemond-Barak’s stated objective is filling the gaps in knowledge surrounding fighting in tunnels and subterranean spaces.  In this she succeeds masterfully.  The underground is a challenging terrain (or sets of terrain).  Like urban battle (or operational) space, subterranean spaces provide ISR (intelligence, surveillance, and reconnaissance) challenges, as well as operational and potential performance decrements that favor the force that controls that space.  This means the underground can be a place of refuge or a secret pathway to an attack. It can even be a mode of attack or weapon itself, as well as a combination of all of the facets.

In short, underground spaces are complex, unfamiliar, and uncomfortable.  Tactical and operational experience are scant, and the military is quite silent about underground engagements (and strategy).  Nevertheless, tunnel warfare and underground fighting have historical presence, informing the potential parameters of subterranean operations.  After a solid introduction Professor Richemond-Barak examines this history, discusses the attendant operational complexity, technological prospects for mitigating these challenges, and addresses the legal issues related to underground combat.

The use and control of the subterranean realm is a largely unexplored area.  After assessing the scope of underground warfare and its proliferation from tool to global threat, she presents a ‘typology of tunnels’.  Developed from historical analysis assessing an underground warfare database developed by the author, this typology looks at: where (single state, cross-border, proximate to border, urban, exurban, proximate to civilians), when (peace or during war/conflict): what (features and purpose of the underground space; man-made, natural, combined, custom or inherited; existing civilian infrastructure), against whom (combatants v. civilians).  These various dimensions provide a foundation for a discussion of sovereignty over the underground.  Gaps and silence in various legal regimes are identified and potential parallels in domestic and international/treaty law (especially the Law of the Sea[7]) and Air and Space Law are identified.

In depth discussion of law, strategy and methods is discussed in Chapter 4: Contending with tunnels. The legal parameters of operating in tunnels leading up to a war (a cause of war), or during an armed conflict (in war) are provided along with a discussion of post-conflict issues.  In this discussion, the author provides a lucid discussion of jus ad bellum, jus in bello, and jus post bellum issues related to underground combat. Human rights law and international humanitarian law (IHL) or the laws of armed conflict (LOAC) are addressed in depth.  The current state of the law (Hague Law and Geneva Law) is comprehensively analyzed.

The need to develop a strategy that conforms to international legal norms is then addressed.  Four elements of such a strategy: 1) detection and mapping, 2) neutralization and/or destruction, 3) prevention and monitoring, and 4) cooperation are analyzed.  This analysis includes tactical considerations and the use of various weapons and techniques. This overview is followed by detailed discussion on jus ad bellum (chapter 5) and jus in bello (chapter 6).

Conducting military operations in subterranean spaces is a complex endeavor. Richemond-Bark provides a detailed discussion of underground combat engagements such as Operation Protective Edge which demonstrated the need for the Israel Defense Forces to consider tunnels as a strategic issue due to their proximity to civilian population centers and multi-purpose engagements—ranging from kidnapping, to tunnel mining, and as a means of infiltration of Israeli-held territory.

In Syria, Operation Aleppo Earthquake on 8 May 2014 helped define the new underground combat reality.  In that incident, Syrian rebels filled a 350-foot-long tunnel with explosives and detonated them under the Carlton Hotel, a Syrian command and control center—40 Syrian soldiers died in the ‘tunnel mining’ attack that became a template for future operations. These ‘tunnel mining’ incidents were complemented by frontal underground combat where competing forces waged intense subterranean infantry battles (p. 31-33).

Learning to fight underground involves knowing the operational considerations, the range of underground spaces potentially involved, the range of tactics, techniques, and procedures (TTPs) available to address these challenges and effectively engage the adversary in those spaces while protecting the civilian populace and complying with IHL and international legal norms.  This will require specialized equipment, training, and potentially specialized organizational configurations.[8]

Underground Warfare and Protecting the Populace

The convergence of underground warfare with urban operations (terrorism, armed gangs conflict, and urban warfare) poses a dual operational challenge to military forces. Intelligence, operational, and command staff face enhanced decision-making challenges as they seek to protect civilians and civilian infrastructure from the effects of urban combat.[9] The use or more accurately ‘dual-use’ of urban features such as tunnels, subway systems, hospitals, and schools as places of refuge by civilians, or places to shield military personnel or material used for military purposes, places significant burden on military commanders during the planning and execution of operations. These complicating tactics were recently seen in Marawi where Islamic State guerillas used sewers and improvised tunnels to elude state forces.[10]

Training to operate in tunnels and subterranean spaces must become an integral component of future training for operating in megacities.   To optimize effectiveness this needs to go beyond tactical maneuvers[11] to include incorporation of lessons learned and decision exercises and wargames for commanders, combat planners and legal advisors to ensure military effectiveness and humanitarian protections.

War in underground spaces (tunnels, bunkers, subways) is an ancient phenomenon that is increasingly becoming a common contemporary concern.  Tunnels can be both a mode and means of warfare.  They can be used as weapons (as seen in tunnel mining) or as the venue for combat. In addition, they have dual potentials as both tactics and strategies of conflict.  Like suicide bombings in the 20th Century, they have the potential to proliferate in the 21st Century through global diffusion and widespread use of subterranean TTPs by armies, criminals (smuggling contraband and trafficking weapons, people and drugs), armed criminal bands, insurgents, and terrorists waging a range of contemporary insurgencies or wars.

Among other things, underground warfare is likely to merge with urban operations and proliferate in the megacity battles of tomorrow. Richemond-Barak does an excellent job of building a foundation for addressing these tactical, operational, and strategic challenges.  Her rich analysis identifies a need for clarification of underground warfare within IHL pointing to a need for new definitions and future law—de lege ferenda—and related strategic-humanitarian interfaces.  Underground Warfare is an excellent resource. It is timely and promises to be a seminal contribution to addressing this emerging dimension of conflict. I read the text from cover to cover and have referred back to it several times since.  It deserves a place on the bookshelf of military commanders, judges advocate general, humanitarian operators, military planners, and intelligence officers seeking to understand tunnel warfare and underground operational space.

[6] See Shimon Arad, “The Role of Anti-Access/Area Denial in Controlling Escalation in Gaza,” War on the Rocks, 31 August 2018, https://warontherocks.com/2018/08/the-role-of-anti-access-area-denial-in-controlling-escalation-in-gaza/.

[7] UNCLOS, the United Nations Convention on the Law of the Sea; see Richemond-Barak's note 2 for Chapter 3: Sovereignty Over the Underground at p.54.

[8] See Matthew Cox, “Army Is Spending Half a Billion to Train Soldiers to Fight Underground,” Military Times, 24 June 2018, https://www.military.com/daily-news/2018/06/24/army-spending-half-billion-train-troops-fight-underground.html and Patrick Tucker, “‘Underground’ May Be the U.S. Military’s Next Warfighting Domain,” Defense One, 26 June 2018, https://www.defenseone.com/technology/2018/06/underground-may-be-us-militarys-next-warfighting-domain/149296/?oref=d-dontmiss.