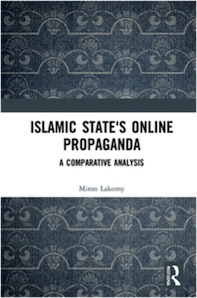 The book is the “…result of a multidimensional content analysis of two flagship periodicals of the Islamic State: Dabiq and Rumiyah” per the publication description. Additionally, other non-English eMagazines are discussed, including Dar al-Islam (French), Istok (Russian), Konstantiniyye (Turkish), and Youth of the Caliphate (Arabic) as well as early English-language ISIS publications such as Islamic State News and Islamic State Report and the slightly earlier al-Naba (Arabic) e-periodical. The work is the result of three years of academic research beginning in 2017, with grant funding provided by the Polish National Science Centre (Narodowe Centrum Nauki). It is divided into an introduction, three parts, and a conclusion. The actual part and chapter listings are as follows:

1.1. Origins of the “virtual Caliphate”

1.2. Understanding IS’s digital jihad: why has it drawn the world’s attention?

1.4. From apex to crisis: online propaganda of Daesh in the post-territorial phase

2.    United they stand: rediscovering the thematic landscape of the

of Dabiq and Rumiyah from a comparative perspective

2.4. Francophone Internet users as a target of the propaganda machine of

Daesh: the case of Dar al-Islam

2.5. Konstantiniyye as a means of reinforcing radicalism in Turkey

2.6. Reaching out to Russian communities: Furat.Press and Istok

2.7. Al-Naba as a tool of communication with internal audiences

2.8. Written propaganda reborn? Unofficial periodicals after the fall of the

3.    Reading between the lines: understanding the propaganda techniques

exploited by Dabiq and Rumiyah

3.1. Methodology of the research project

3.2. Propaganda devices and argumentation used in Dabiq and Rumiyah

The work also includes 31 black and white (B/W) images—mostly cover page shots—from the various periodicals addressed (with Dar al-Islam predominant) as well as video and advertising screen shots, along with a roughly similar number of tables. The tables explore themes, provide profiles, discuss argumentation, and provide word frequencies for the Dabiq (15 issues) and Rumiyah (13 issues) in-depth comparative analysis undertaken. The eBook would have benefitted from color images being presented—these are visually more informative for narrative analysis purposes—from the periodical materials utilized but since the eBook is also tied to the hardcopy version (which prints the images in B/W only) no flexibility existed with the publisher book files, unfortunately a common occurrence in this regard. 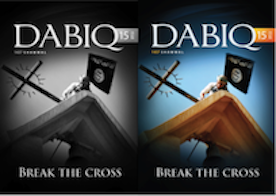 Islamic State’s Online Propaganda is extensively researched, with almost a thousand endnotes, and contains a rich body of primary sources (in multiple languages) as well as numerous secondary sources drawn upon. While a useful index exists, no non-English word glossary has been provided. This would have aided those readers unfamiliar with Salafi-jihadi terminology which can be at times very opaque and is extensively utilized. As an example, a ready understanding of terms such as kufr (unbelievers), murtadd(apostate), and tawaghit (apostate political elite) only exists in the lexicon of specialists and Salafi-jihadi adherents.

The work’s structure is interesting in that its two initial parts provide mostly details and context behind the ‘virtual Caliphate’ and the Islamic State’s online propaganda workings. In some ways, this makes for a better and more understandable approach because the reader is not overly burdened with being forced to grasp the author’s methodology upfront as frequently transpires in academically focused books. The methodology itself—articulated in the book’s third section—draws upon a well-articulated data coding scheme and the seven-devices approach derived from the Institute for Propaganda Analysis (IPA) which was a US based organization. This approach was elaborated in the 1930s and focused on the analysis of Nazi German propaganda. It has since been successful utilized and directed at radical Islamist group propaganda analysis. These seven devices are: (1) name-calling, (2) glittering generalities, (3) transfer, (4) testimonial, (5) plain folks, (6) bandwagon, and (7) card-stacking (p. 125). These devices are then discussed and outlined in the rest of this part of the manuscript. The concluding section provides a comparative overview of the two online magazines (derived from the content analysis conducted in part 3), yielding these two tables:

The Table 4.1 findings suggest the core themes of Dabiq and Rumiyah primarily diverged concerning politics and society (Dabiq was three times more focused in both of these thematic areas) and relatively the same in operations, religion, and economics (marginal in both publications) with the other category more weighted towards Dabiq. This means that Rumiyah, as a follow-on to Dabiq, was published with the recognition that the territorial Caliphate was in its twilight. Thus, it exhibits a more practical “focus on military and terrorist operations, with a plethora of religious-themed articles” (p. 209), something an organization would need as it reverted back to terrorist and insurgent activities with its religiously inspired fighters are forced once again to go to ground.

The Table 4.2 findings suggest that the name-calling, glittering generalities, and transfer themes are dominant for both periodicals—with testimonial, card stacking, and bandwagon used 2-3 times more often in Dabiq than Rumiyah, though still far less so than the initial three themes. The plain folks theme was underutilized in both publications. Overall, both magazines appealed to less educated readers and focused on one-sided messages, with Rumiyah representing a further devolution (with its aforementioned removal of much of its political and legal arguments) in its narratives and argumentation (p. 210). This gives Rumiyah a more cult-like and true believer appeal than Dabiq although, counter-intuitively, Rumiyah dispenses with the apocalyptic end of days focus of Dabiq. Rather, it pragmatically promotes the narrative that a long and hard fight is coming to the surviving Islamic State remnants in the months and years ahead.

Overall, the content analysis interpretation is a bit difficult given the apples-to-oranges size differences between Dabiq and Rumiyah. Dabiq had a much larger average page count at 62.8 when compared to Rumiyah’s 45.3 average pages (p. 128). Where the conclusion falls a bit short is in regard to the ambiguity related to the implementation of some form of page count equalization formula which would provide average thematic and device constants for better comparative analysis purposes. After multiple reviewer assessments of Tables 4.1 and 4.2, it appears that no such equalization formula such as a percentage of the relevant pages approach has been applied. This explains why the Dabiq theme and device page counts are so much higher overall than those found with Rumiyah, skewing the overall findings of the study.

Still, to be fair, the book provides a far more comprehensive and detailed analysis of Dabiq and Rumiyah elements than nearly all other scholarly works focusing on this duality of Islamic State publications, especially since the majority of those are of much shorter refereed article lengths. It also provides more context and a better understanding of the Islamic State’s use of online magazine propaganda on the World Wide Web (and the digital website and application infrastructure behind it) than many other works. Given the three year plus effort behind the research and analysis undertaken leading to the publication of Dr. Lakomy’s work, this is not surprising. For these reasons among others, it represents a welcome and very important new resource in this area of study, which is one that, even during the post-territorial Caliphate phase, is still highly relevant given the continued publication of online successor magazines by IS (such as Al Risalah and Voice of Hind) as well as by Al Qaeda and other Salafi-jihadi groups (such as One Ummah).[2]

A slight detraction to the work’s usefulness is its high hard cover cost—a downside of the academic publishing market. The eBook version does however, take the price down considerably. In addition to Miron Lakomy, well over a dozen other scholars and professionals have been writing on this topical subject and a good number of their works (even if of lesser importance) are readily available free of charge. For this reason, the broader impact of this brilliant work will be lessened as the physical editions will more likely ending up only in university and think tank collections and in the libraries of a few scholars and professionals. Hopefully a cheaper soft cover version will eventually appear for course and broader research use but, given the specialization of this work and the academic publishing model, this appears unlikely.

[1] The review was conducted based on the eBook version of Islamic State’s Online Propaganda. The digital interface in the VitalSource Bookshelf program takes a bit of getting use to and is not intuitive but is functional once understood.

[2] Robert J. Bunker and Pamela Ligouri Bunker, “The Appearance of Three New Radical Islamist English-Language Online Magazines: Al Risalah, One Ummah & Voice of Hind.” Small Wars Journal. 10 May 2020, https://smallwarsjournal.com/jrnl/art/appearance-three-new-radical-islamist-english-language-online-magazines-al-risalah-one. The retrograde quality IS bulletin From Dabiq to Rome can also be added to this listing. For an example uploaded by Miron Lakomy, see https://www.researchgate.net/figure/Title-page-of-the-From-Dabiq-to-Rome-30_fig10_329737431.

Thank you very much for posting about this article, it will come in handy for my dissertation writing. I am writing a work in sociology about Islamic State and use this service a little https://uk.edubirdie.com/dissertation-writing-service because it is a very responsible and important paper in my life. Hopefully, this article will help me in writing the theoretical chapters. This is a very good case study. Many thanks!