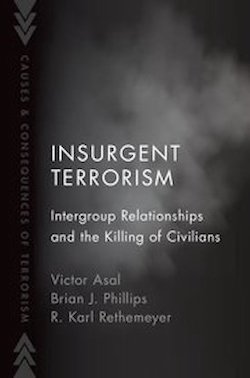 The book seeks to explain why insurgent groups sometimes kill civilians. The authors establish the term “insurgent embeddedness,” which refers to the extent to which an insurgent group is interlinked with the state, the public and other insurgents. The authors use this embeddedness term to examine its effects on violence targeted toward civilians. Victor Asal is the Director of the Center for Policy Research and a professor at the Rockefeller College of Public Affairs and Policy. Victor Asal and R. Karl Rethemeyer codirect the Project on Violent Conflict. R. Karl Rethemeyer is the dean of the College of Social and Behavioral Sciences and professor in the School of Public Policy at the University of Massachusetts, Amherst (UMass). Brian J. Phillips is an affiliated professor at the Centro de Investigación y Docencia Económicas (CIDE) in Mexico City and a Reader in the Department of Government at the University of Essex. These three authors focus on the importance of relationships for analyzing insurgent behavior as these relationships can create or constrain opportunities that can then form choices regarding targeting.

The Structure of the Inquiry

This book contains an introduction, eight chapters, conclusions, and an Index. The book is divided into three main sections. The first section includes the introduction and chapters two, three and four. The first section focuses on presenting the different theoretical perspectives that help explain why these insurgent organizations attack civilians and the database constructed to test the authors’ hypotheses. The last part of this section presents the authors’ hypotheses. The following section includes chapters five through seven and focuses on applying the embeddedness theory to three related violent outcomes: attacks on the public, schools, and journalists. The third and final section includes chapters eight and nine and the conclusion. The third section provides an in-depth analysis of inter-organizational relationships, including the formation of alliances and rivalries.

The second chapter “The Embeddedness Theory of Civilian Targeting by Insurgent Organizations” focuses on the different theoretical perspectives used to understand why insurgent organizations might kill civilians. The authors focus on the network of relations an insurgent group is embedded in to help understand its group behavior. The book focuses on the insurgent’s group relationship with the state, the public, and other insurgencies. The authors develop several hypotheses regarding insurgent groups and their interactions with these three groups. Insurgencies’ interaction with the state can produce differing responses from the state, including coercion or concessions that shape the insurgencies’ potential targeting of civilians. The relationships among insurgent groups can also affect the targeting of civilians as alliances encourage these organizations to act more violently. Rivalries among these organizations can also produce more violence against civilians as the insurgent groups compete against one another over resources. The public relationship with insurgencies can also affect civilian targeting. The authors focus on groups that provide social services to civilians, have ethnic motivations and are involved in crime as variables that may affect the likelihood of civilian targeting.

The fifth chapter “Why Do Some Insurgent Groups Mostly Attack the General Public?” focuses on the possible link between insurgent embeddedness and attacks against the public. The authors note that a key element of attacks on the public involves the perceived randomness of the violence. These attacks are understood as producing messages toward the general public and the government. The authors find that insurgents are less likely to target the population after receiving concessions, and coercion by the state often encourages insurgents to target civilians. They find that alliances amongst insurgencies do not necessarily increase the probability of targeting civilians. Rivalries amongst insurgencies are associated with insurgents focusing their attacks on the population. Insurgencies that provide social services are not likely to target the public as they are trying to get their support. Crime was not related to higher attacks on the public, but ethnic motivations were linked with a higher probability of targeting civilians. Finally, the control variable of insurgencies operating within a democracy was vital as it increased the possibility of the public being attacked.

The sixth chapter “Why Do Some Insurgent Groups Attack Schools?” focuses on the targeting of educational institutions by insurgency groups. The authors explain how educational institutions are protected under humanitarian law and are generally understood to be illegitimate targets. The authors test their model and hypothesis to the targeting of schools. They find that the variables related to coercion and concessions by the state and social service provision by the insurgencies are potent indicators for violence targeting schools. They find a positive relationship between state coercion, intergroup alliances and social services provided by insurgencies and school attacks. Some variables previously linked with an increase in terrorism, such as association with crime, rivalry among insurgencies and ethnic motivations, were not associated with insurgent attacks on schools.

The eighth chapter “Longitudinal Modeling of Insurgent Alliances” revolves around the factors that help explain insurgent network formation and change. The authors compile a data set that looks at the presence or absence of ties between insurgent organizations during their active years. The authors split their data into three main periods: pre-9/11 (1998-2001), post-9/11 (2002-2007) and post-surge (2008-2012). During these 15 years, the nature of insurgent networks increasingly changed. At first, insurgent organizations had weak ties generally formed due to proximity, shared ability to provide social services or kill people and relational closure. Things drastically changed during the post-surge period, and the network became more extensive and complex. The network grew through shared ideologies, greater reliance on state sponsorship and a new openness to form alliances beyond the home state. Network relationships among insurgencies have evolved into flexible links that can provide material and operational benefits to one another.

The ninth chapter “Understanding Insurgent Rivalry” examines the importance of rivalry amongst insurgent groups. The authors focus on two main features to explain rivalry amongst insurgency groups: ideology and the propensity (or effectiveness) to kill. The authors find that, unlike alliances, there is no extensive network of rivalries; when they do appear, they seem to be predominantly localized. The data shows that religious and separatist-motivated insurgent groups are likelier to form rivalries, and interestingly, ethnic motivations alone are no more likely to experience rivalries. The control of territory by a group or their attachment with the drug business increases their probability of having rivalries while holding office seems to decrease the likelihood of having a rival. The alliances, the size of the group and the organization’s age do not correlate with the presence of rivalries. Insurgent groups in democracies are less likely to have a rival, and the more insurgent groups in a country, the higher the chance they have rivalries. The state’s response to insurgencies also does not have any relation to the existence of rivalries among insurgency groups. The chapter shows the importance of religion in forming rivalries and provides unique insights into the construction of rivalries amongst insurgency groups.

Insurgent Terrorism: Intergroup Relationships and the Killing of Civilians takes a unique approach to analyze insurgency groups and their decision to target civilians. This book is excellent for those in comparative politics focused on violence and insurgency groups. Most of the literature on the subject has focused on the relationship between insurgency groups and the state. The authors show that a state-centred analysis misses several essential facets of the relational network in which insurgency groups are embedded. By focusing on these organizations’ relations to not just the state but one another as well as the general population, the authors uncover essential patterns. These patterns help understand why insurgency groups would target civilians. The formulation of the embeddedness theory provides a deeper understanding of the calculations taken by these groups to engage in violence against civilians.

The authors' creation of the Big, Allied, and Dangerous II database is a valuable tool that will help uncover the network of relations behind insurgency groups. This database will provide countless research opportunities for the future study of these groups and their relationship networks. The division of the general population, journalists and schools as targets offers unique insights into different types of targets that have been understudied in the field. The division of targets also uncovered how unique factors identified as affecting the targeting of civilians play different roles depending on the target under study. Finally, the in-depth analysis of alliance and rivalry formation among insurgency groups helps explain the evolution of network alliances and the main factors behind the existence of both alliances and rivalries. The book provides policy implications regarding the possible reduction of civilian victimization and convinces the reader of the importance of insurgent embeddedness in understanding violence against civilians.

[1] Victor Asal and R. Karl Rethemeyer “Updates to the Big, Allied, and Dangerous (BAAD) Dataset,” START (National Consortium for the Study of Terrorism and Responses to Terrorism). n.d., https://www.start.umd.edu/research-projects/updates-big-allied-and-dangerous-baad-dataset.